Event T-Shirts (Are They Worth It?)

Recently, a client contacted Turnkey concerned about the cost of the recognition items that were sent to participants in their walk program. It seemed twice as many people redeemed the items than Turnkey’s initial projections allowed for. When reviewing the final revenue for the program, the client revealed that twice as much money had been raised—$2 million as opposed to the $1 million goal. The client had overlooked two things: that the costs of redeemed recognition items are variable, and that the act of redemption had a direct impact on the success of the program.

This situation isn’t unusual. There is a common lack of understanding about the value of redemption in driving fundraising. As opposed to being a  “thank you for your participation” item, the data shows that the act of redeeming for appropriately selected items results in higher levels of revenue on the part of volunteer fundraisers and donors alike. 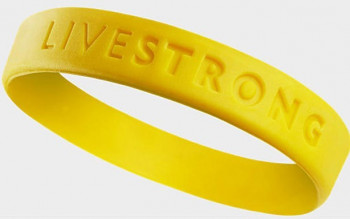 Image via The Atlantic

What the Numbers Tell Us

Last month, Turnkey published an e-book titled, “Volunteer Fundraiser Motivation,” which looks at the role of recognition in fundraising. Our findings reflect in-depth research of 83 programs from 33 different organizations in the U.S. from January 2012 to November 2015. The data is drawn from a variety of platforms our clients use. The organizations’ events included walks, non-competitive runs and DIY efforts.

For walk and DIY events, we found the following:

The data shows that, overwhelmingly, people who redeem for recognition items fundraise at higher levels than those who do not. And if that is the case, what should we expect from people who redeem in the future?

Are People Who Redeem More Mission-Aligned?

If people who redeem are more mission-aligned, we should expect that volunteer fundraisers who redeem will show higher fundraising and retention the following year. For example, if Mary earned a recognition gift through fundraising, whether she redeems for the gift, will tell you a lot about her future behavior. If she wants that gift, she is more likely to return and fundraise, and when she does, she’ll fundraise at a higher level. If she doesn’t redeem for the gift she earned, she is likely to fundraise at lower amounts in the future, if she returns at all.

And that is exactly what we found. We took one large client that held fundraising walks for a deeper dive into “Year 2” behavior. This program represented more than 200,000 participants per year. We looked at how redeemers (recognition seekers) vs. decliners performed in “Year 2.” 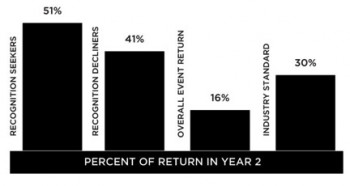 What does that tell us? Clearly, people who redeem for recognition items are more mission-aligned than those who do not. Seeing this behavior in the large sample that was examined in the case study above,and having seen it in other analyses, we are confident equating “mission alignment” and “redeemers.”

But Exactly How Are Redemption and Fundraising Related?

To answer this question, Turnkey looked at two national walk programs that had “zero-dollar fundraisers.” People who had registered, but even after being prompted, had failed to fundraise online. Between the two programs, there were more than 43,000 “Zeroes.” We sent them a simple message recognizing them for their registration to fundraise, along with an offer to redeem for a decal with the organization’s logo and the name of the program. Twelve percent of the Zeroes redeemed for the decal. And the results were dramatic.

People who redeemed for the sticker went on to raise $2.5 million for the organizations. More importantly, redeemers raised 245 percent more than those who did not redeem ($294 vs. $120).

A Step-by-Step Guide to Organizing a Golf Fundraiser

Guide: How to Maximize Sponsor Support & Raise More Dollars From Your Golf Fundraiser

Guide: Types of Business to Target as Sponsors for Your Golf Event
Comments
Happening Today
Your Data-Driven Donor Engagement Workshop