Tinder Is Pro-Women (And It’s A Beautiful Thing)

Yesterday was International Women’s Day, an annual movement that has been dated back to the 1900s to support the economic, political and social achievements of women and the fight for gender equality. To my strong, independent women out there—you rock! You continue to motivate and inspire us every single day. Coinciding with Women’s Day was the “A Day Without A Woman” campaign, where women participated by taking the day off from work, avoiding shopping for a day and wearing red in solidarity, according to the Women’s March website.

Of course, the Women’s March was not alone in celebrating Women's Day. People all over the world rallied in celebration of women's rights. British Prime Minister Theresa May pledged $24.3 million to organizations dedicated to fighting domestic abuse and violence; abortion rights activists rallied to fight Ireland's abortion laws by wearing black and called the movement "Strike 4 Repeal"; people rallied in Australia to support the economic justice and reproductive rights of women; Gabriela Party, a women's activist group in the Philippines, rallied at the U.S. embassy demanding employment and discrimination reforms; Indian women celebrated by performing the Giddha dance. Russian President Vladimir Putin chimed in with a speech congratulating women—it was broadcast on state television, according to CNN.

"You care day and night for your children, grandchildren and your family. Even today, on International Women's Day, you are still caught up in your routine, working tirelessly, always on time. We often ask ourselves, how do they manage it all?" — Putin

One company in particular stepped it up a notch to celebrate Women's Day and raise its awareness, too. The mobile app notorious for helping people of all ages find a romantic date, a future soul mate or a random hook up launched its #FundHerCause contest.

“All around the world, women are bucking societal norms—they’re breaking down barriers, they’re breaking with tradition, and by doing so, they may even be breaking the law—all for something the rest of us consider a basic human right. They are bold. They are brave. They are badass. Whether climbing their way to the top of their trade or making their mark with a single act of defiance, they’re the torchbearers of women’s rights and they’re fighting for us all.” — Tinder

Tinder promises to donate $250,000 to global organizations that support women's causes, which include Planned Parenthood, Women for Women, Girls Who Code, UN Women, She Lift, She’s the First, Partners in Health and plenty more. A total of 2,500 winners will be selected and awarded $100 for the full $250,000 donation from the company. 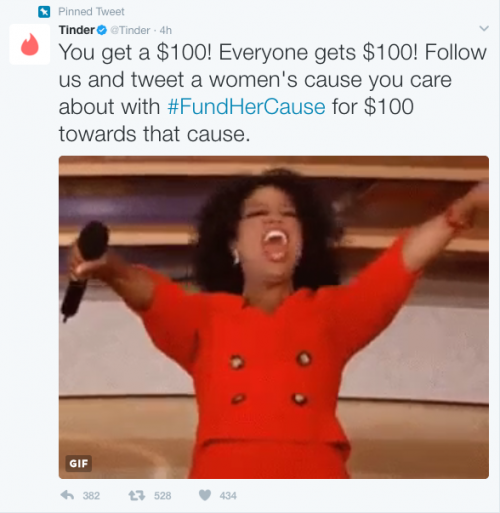 To join in on the celebration, Tinder is inviting people to tweet about the organization they want to support and tag @Tinder and use #FundHerCause. Entries are being accepted until 11:59 p.m. (Pacific) on Mar. 31. For additional details on contest entry, visit https://www.tinder.fund/rules.

And by the looks of it, people are loving Tinder's initiative. You go, Tinder! 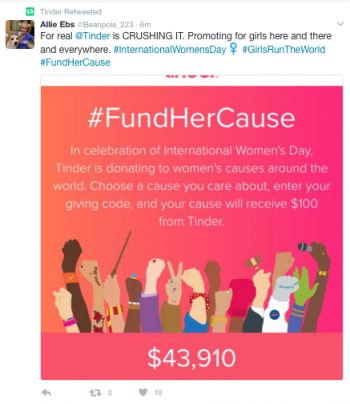 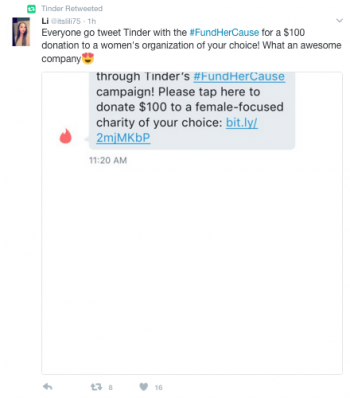 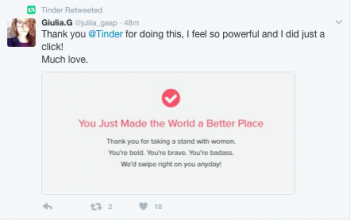