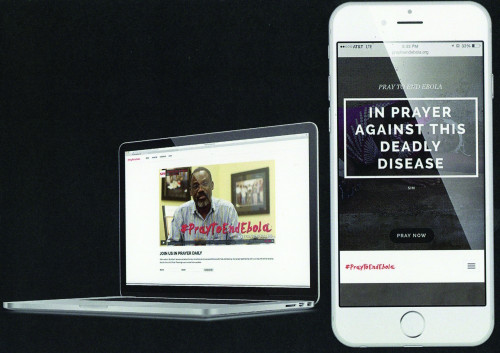 Why It Won
As the full scope of the West Africa Ebola crisis began to take shape in 2014, nonprofits around the world leapt into action. Disaster relief poured in from all corners of the globe, in the form of money, water, food, supplies, volunteers and more. SIM USA, an international mission organization with 4,000 workers serving 70 countries, took a different approach. It called for prayer.

SIM USA’s ELWA Hospital in Liberia was at the epicenter of the outbreak, and the organization spent nearly $1 million in the first five weeks evacuating at-risk or sick personnel. So, with the help of Douglas Shaw & Associates, SIM USA conceived its emergency #PrayToEndEbola campaign. Goal one: Offset the hospital’s skyrocketing operating expenses as it continued treating and caring for patients, SIM USA conceived its emergency. Goal two: Engage people all over the world to pray to end the outbreak.

The multichannel campaign spanned three months—August to October 2014—using a comprehensive mix of channels to deliver its message and rally supporters for a week of prayer. In late August, it launched with a dedicated microsite, a national press release, and an emergency mailing and email to SIM USA constituents. In September, it kicked into gear, adding radio public service announcements, nine days of coordinated Facebook posts, Facebook paid ads, a seven-day email series and a livestream with SIM USA’s international director. The campaign generated 2,141 Facebook likes, 500 new email sign-ups through the microsite, 1,039 clicks on Facebook paid ads and a staggering 1.2 million total impressions. It raised $406,284 at a total cost of $42,459.

But the numbers only tell half the story. From the microsite design to the branding to the email and Facebook-post templates, the campaign featured stunning creative—large images, use of deep red color to enhance urgency, a mobile-responsive website, a simple mailing with a clear call to action, and more. It earned a near-perfect score from our judges.

2020 Nonprofit Professionals of the Year