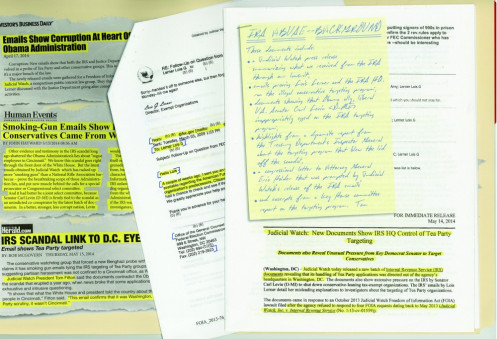 Why It Won
Judicial Watch’s big mailing to its supporters would stand out in anyone’s mailbox. First, there’s the size, a 10x13" closed-face outer marked “OFFICIAL BUSINESS MAIL.” Next, the weight lets recipients know there are a lot of materials inside. The star of the package is a file folder filled with pages of press releases, newspaper clippings and emails surrounding the group’s campaign to investigate the IRS for its alleged targeting of conservative nonprofits. It cleverly engages Judicial Watch’s most ardent members by reinforcing the organization’s work. The highlighted, handwritten notes on the documents give readers who don’t want to dig into the details a chance to quickly scan through them and understand the group’s case.

“Our challenge was to present the case and our engagement in it in an authoritative, comprehensive, but (most importantly) clear manner,” said Ariana Azizkeya, direct response marketing manager for Judicial Watch. “As a result, we created a file folder format that contains separate information packets. And, targeted highlighting and marginal handwriting notes from Judicial Watch’s president help move the narrative along in a scannable way.”

The numbers here are impressive enough: $406,487 raised on a total cost of $202,417, with a 6.42 percent response rate. But it is Judicial Watch’s understanding of its audience and how to effectively engage its members that elevated this mailing to award-winning levels.