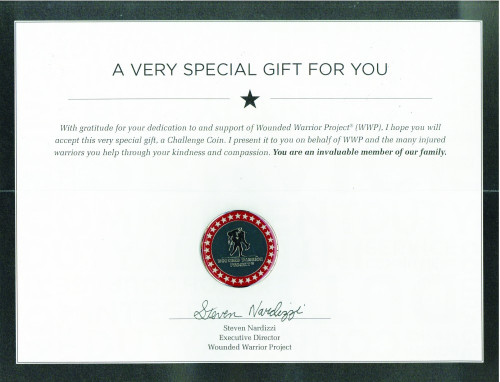 Why It Won
The purpose of Wounded Warrior Project’s Challenge Coin mailing was twofold. Sent in May to high-dollar donors, the test mailing was designed to increase gross income during a typically slow month, while replacing the organization’s standard control package—a certificate—as a more tangible way to thank donors. The package impressed for several reasons. First, the coin was an appropriate item to include, as it symbolizes a strong connection between the group and its donors (in the military, coins are used to represent loyalty to a unit). Second, the large #14 closed-face envelope stands out in the mailbox, and the coin inside adds to the physical weight of the package.

The mailing included a two-sided letter with a personal story from a wounded veteran, a thank-you card that could be filled out and returned to a veteran, and a large certificate with the coin attached. The presentation drew high marks from our judges. The campaign’s performance numbers were equally impressive. It greatly outperformed the control mailing, grossing $111,000 more despite a $4 lower average gift. It also increased response rate by a whopping 46 percent, and netted 48 percent more than the control despite the increased cost.