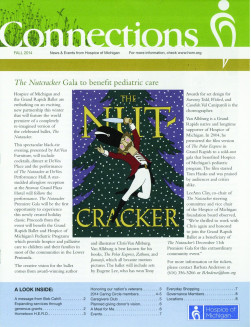 Why It Won
What do you get when you combine a health-care nonprofit and a ballet company? An inspiring partnership—and $500,000 in  funds raised. At least, that was the case when Hospice of Michigan and Grand Rapids Ballet teamed up to host a 1,200-person gala event in support of a new production of “The Nutcracker” by Chris Van Allsburg, a Michigan native and author of “The Polar Express” and “Jumanji.” The premiere event would feature a formal dinner, the exclusive debut of the ballet and a post-event reception.

The two organizations leaned heavily on board members and community engagement in promoting the event, and built a detailed media kit that was given to event sponsors. They also promoted in newsletters and on social media, with a “Nutcracker Selfie” initiative and paid Facebook promotion. MLive.com, Examiner.com and other major media outlets covered the production, generating millions of page-views and healthy buzz.

The event attracted 1,200 attendees, generating $300,000 in ticket sales and  another $200,000 from sponsors. Hospice of Michigan and Grand Rapids Ballet split the $500,000 in total funds down the middle, and raised an additional $30,000 in 30 minutes from a matching-grant challenge during the dinner. For a pair of organizations with wildly different missions, the event was a massive success—one that hints at the power of collaboration and community in the nonprofit space.