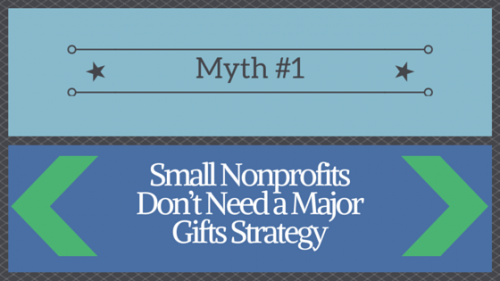 It’s a common misconception that small or new nonprofits can’t go after major gifts. But this myth is easily busted if we just rethink what “major gift” means.

Sure, for a large organization a major gift might be a six-figure number. But for a small, up-and-coming nonprofit, a major gift could be drastically different. And that’s OK!

Because small organizations often don’t have the capacity to go after those six-digit donations, they tend to think that any kind of major gift is out of their reach. But if your small nonprofit wants to break into the major gift fundraising game, you’ll just need to establish what a major gift is for your organization.

Look at your past donations and highlight the largest contributions.

Then, follow these steps to determine what your major gift goals should be:

Don’t assume that your small nonprofit can’t obtain major gifts! You just have to rethink your strategy.

The Truth: Nonprofits of any size can go after major gifts. But each organization, big or small, must first establish what a major gift is for them.