Fundraising Myth No. 2: Advocates and Donors Are Two Groups That Don’t Overlap 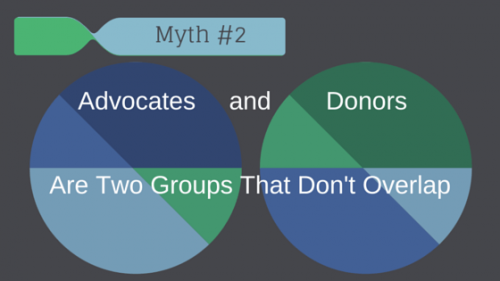 Some people will divide advocates and donors into two separate groups that rarely overlap.

And while it is true that some of your donors will never sign a petition and some of your advocates will only ever donate their time, the two groups are not always mutually exclusive!

The idea that the two demographics don’t overlap simplifies the rich complexity of the supporter/nonprofit relationship.

You likely already know that the lifetime value of a volunteer or advocate is incredible (especially with the right engagement!), but that value increases the minute a volunteer makes a donation to your organization!

Similarly, when donors give their time to your nonprofit, they get to see the immediate effects of their efforts.

The Truth: Your biggest advocates can become donors, and your donors can become your most loyal advocates. Don’t think of the two as separate groups!

Bonus tip: Check out this article for ideas for turning advocates into donors and vice versa!