What to Say to Your Supporters Right Now, Part 2

How best to talk to supporters now? Should I be fundraising during the crisis?

In a recent blog, we discussed the appropriate language to use with supporters in the age of the COVID-19. We suggested that you imagine how you might speak to a family member during these times. You’d want to reassure them, to let you know that you’re concerned for their safety.

Since that blog was posted, we’ve seen some great examples of that type of communication. Others, well, not so much. One outstanding example of hitting the perfect tone came from a U.K. nonprofit, the Royal Navy Lifeboat Institute. The U.K. doesn’t have a U.S.-style Coast Guard, so privately supported water rescue groups fill a critical need.

The RNLI posted a sixty-second video thanking their supporters, reassuring them that they are still on duty and that they’re a “part of the crew.” And that today, “We’re sending our support to you.” Give it a watch. It strikes all the right chords. 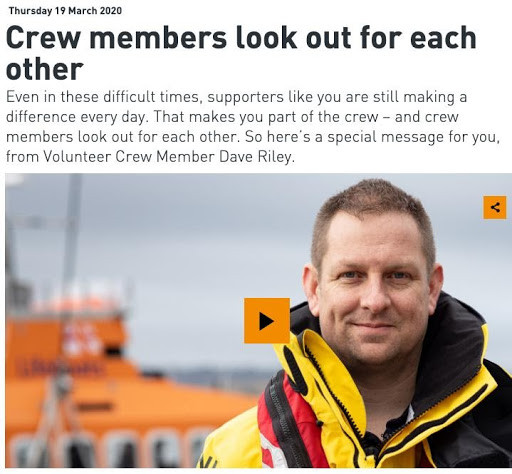 There are great examples of messages that do make a request to donate, as well. Last week the Humane Society of the United States launched a Facebook Fundraiser to support the delivery of pet food to seniors, veterinary care and shelters across the U.S. After nine days, they had 735 donations totaling more than $23,000. The average donation was $32. 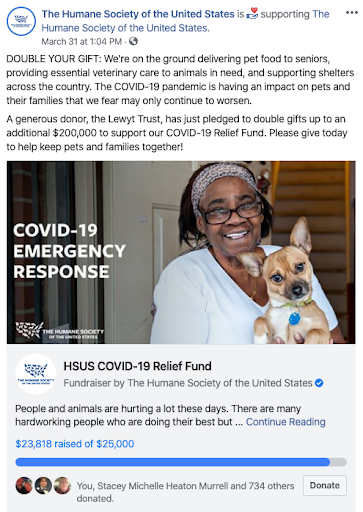 John Vranas, the chief development and marketing officer at HSUS, said that they were approached by the Lewyt Trust with an offer to match gifts up to $200,000. He told us that the main goal of the campaign was “... to let people know that we’re still in business, moving forward, and we still need your support. It was a way to remind donors how important they are.”

John was quick to point out that not all of their communications to supporters include a request to donate. Their messages consist of equal numbers of updates about the mission and requests.

Should I Be Fundraising Now?

In his recent book, “If You’d Only Known… You Would Have Raised So Much More,” fundraising copy guru Tom Ahern says, “Donors are not giving to you, they’re giving through you, to make something important happen.”

Seen in this light, the answer to the question, “Should I be fundraising now?” becomes pretty clear.

Research has shown that prosocial behavior — doing “good deeds” — actually helps people to combat stress. Participation in your nonprofit’s mission is a great gift that you can give to your supporters.

They need it right now — a lot.

Is Your Narrative Promoting Stereotypes?