In the last few years, the term “implicit bias” has gone mainstream, and the idea has infiltrated even the backwoods of Virginia.

Otis and I talk about this kind of stuff almost every day in our home life and at work. So, implicit bias was on my mind last Sunday as I drove home three hours to go to church with my dad. We sat on the back pew, as is my family’s way. The preacher is set to retire in a little bit, and they are on the hunt for a new one, or as they say, “Looking to call a new preacher.”

Having 'The Right Attitude'

I grew up in the Southern Baptist church I sat in last Sunday in rural Virginia. At one point in the last year, I got so upset with the Southern Baptists; I vowed I wouldn’t go back—this time over their codified sexism. The Southern Baptist Convention doesn’t want women as deacons. When I said, “No more," I failed, however, to take into account the terribly hurt look on my dad’s face when I said I didn’t want to go back to the church he grew up in. He is the only reason I will go there.

So, I braced myself for Sunday’s sermon, not really knowing what I might hear from this preacher, who once insulted my older brother, a Catholic, by saying the Catholics were evil during a sermon. My brother held up the “so-glad-to-see-you-this-Sunday” handshake line for a bit that day. Made me proud.

The sermon’s title was “The Right Attitude.” I knew I had a tough week at work coming up, so I settled my face into that “I’m listening” look and started planning my work priorities. When you distract yourself fully sometimes, you can not even hear the crazy. My own church is Presbyterian, one that works hard on inclusiveness and tolerance. I am pretty sure that when the shoe is on the other foot, and my family members visit me, they play the same game trying not to listen to the liberal crazy they hear there. It’s all perspective.

The preacher started talking. I could hear Lyle Lovett songs in my head, getting mixed up with the sound of preaching. Trying really hard to focus on my to do list in my head … then I heard it. The preacher said, “Did you know (long preacher-esque pause), that men who are 6 feet 2 inches tall and over make 12 percent more on their first job out of college than men who are 5 feet 6 inches tall and under?" My sharp intake of breath startled my dad. He leaned over and said, “Honey, Otis is 6 feet 10 inches tall. Y’all will be fine.” (That last thing only happened in my head.)

I thought, is he going to say the words? Is he going to utter the wave-your-Confederate-flag-inducing words—IMPLICIT BIAS? WHAT IS GOING ON? I feared for the preacher’s safety if he went so far. I imagined him saying, “And did you know that if two people apply for a job with exactly the same skill sets, and if one is a man he will get the job far more often than the other if she is female?” I imagined him talking about… no, he wouldn’t, couldn’t, shouldn’t … racial bias. In my head, I’m thinking, “I’m going to have to help bust this man out of here. And I know a bunch of these people are packing (cause my momma told me all the churches down there decided there should always be people in the congregation with a gun in case the terrorists show up. This was not just in my head—she said it and meant it). Jesus help me.”

The sermon progressed. He talked about the people doing the hiring in a way to cause what he described as a patently unfair difference. He said the hiring parties did not have the “right attitude.” He did not say, “You all should know that none of their decision-making was conscious, and if you asked them, they would not be able to articulate that they prefer taller men.” Nor did he say, “And the reason they prefer taller men is that a long, long time ago, before civilization, you wanted to surround yourself with the biggest men you could find as a means to stay alive. They were weapons of a sort. So, our preference became programmed, so to speak, into our DNA.” He didn’t say, “The same kind of unconscious bias affects almost every decision we make, including those involving race, gender, disabilities, etc.” (I am real glad he didn’t say that because all hell would have broken loose then.)

But here is what he did say: "It’s not right.” And he said it in a Southern Baptist preacher way, his bushy eyebrows together, his chin thrust forward, with utter confidence.

This preacher didn’t live to be old by being stupid. I imagine that he had been planning to go down this path after he announced his retirement. This kind of topic will get you “uncalled” if offered up in a church like this one. He was also wise in that he did not connect the dots for the congregation in that one sermon. He planted a seed of an idea. I hope he will pour water on it with several follow-ups. Even if he doesn’t, I was still pretty darned excited to hear the work we do every day get brought up in a Southern Baptist church in the tobacco country of Virginia. I was not, yet, able to continue the conversation over the corn bread and stewed cabbage lunch after church. Still … progress.

“Implicit bias” is most recognizable as a term due to its reference in regard to unconscious attitudes held by police officers that bias their treatment of black people. The idea that one can harbor unconscious attitudes—racism, sexism and other unpleasantisms—is disconcerting, as well as controversial. We don’t want to think of ourselves as biased or prejudiced, and we sure don’t want others calling us those things.

But the evidence is overwhelming that implicit/unconscious bias exists, and that it can affect behavior. You can test your own implicit bias online on a range of attitudes including race, gender and sexual orientation at Project Implicit. You may not like the results, but it underscores the profound impact that our culture has on us, often without our awareness. I took it. I was not happy with the results.

At Turnkey, we develop strategies to leverage various biases to increase fundraising. Psychologists have identified lots of biases, as you can see in this Cognitive Bias Codex. Cognitive biases can be organized into four categories: biases that arise from too much information, not enough meaning, the need to act quickly and the limits of memory. 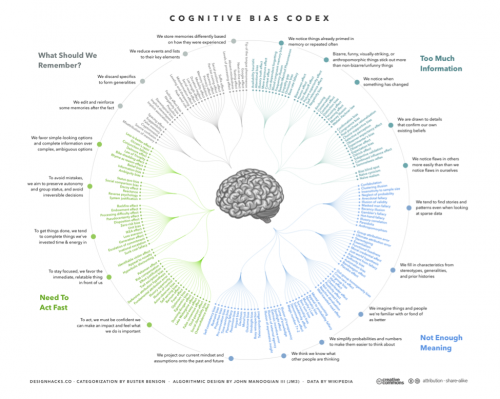 And a bias that leads you to be suspicious of people who don’t look like you affects cops, where we hear the most about unconscious bias. It was a good thing for our ancestors, who needed to quickly size up someone based on their appearance to decide whether to approach or avoid them—the need to act quickly part. Like the rest of us, cops are stuck with that bias, and because it’s unconscious, it makes their job really tough.

But people like my dad’s preacher are helping a lot, simply by helping us understand that these biases do exist. Can we change them in ourselves? There is a lot of discussion about that. What we know we absolutely can do, however, is temper the impact of our biases, like through careful training of law enforcement officers.