How Should Nonprofits Promote Their Value?

When evaluating a nonprofit organization’s financial and operational effectiveness, what should we consider? It is the age-old nonprofit conundrum: How do we show our nonprofit value on paper? 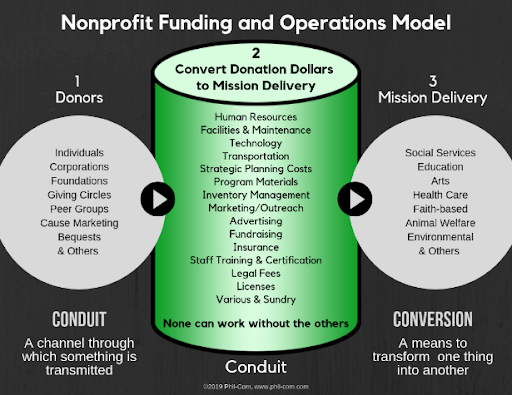 No One-Size-Fits All Formula

None of this means it is impossible to determine whether a nonprofit organization is being fiscally responsible and delivering programs effectively. It simply means that there is no one-size-fits-all measures of success.

As an outrageous example, let’s look at it this way. Nonprofit Cool Runnings shows an overhead percentage of less than 10%. One might be inclined to think they are amazingly frugal (it must be noted that operating at an extreme level of frugality is NOT a sign of a financially healthy organization). But upon closer inspection, a vehicle that was listed under program costs is, in fact, a Ferrari that the executive director drives. See the problem?

In terms of fiscal responsibility, it is more about what the organization is spending money on, not necessarily how much. A nonprofit spends money to send staff to leadership and communications skills training, which is seen by some as a “luxury,” not a necessity. But the result over time is less turnover and the lowered financial costs and toll on morale that high turnover causes. Now is the expense considered a luxury or a smart and strategic business move?

Focus on the Storytelling

The examples above illustrate some of the many ways nonprofits try to prove to donors/investors that the organization is worthy of donations. And it IS important to be able to show that an organization’s finances are employed strategically and monitored closely.

But what donors really want to know is how will their money improve someone’s life? Will their funds keep a pre-teen girl alive, because of the after-school suicide-prevention program made possible by donors’ gifts? Or maybe a busload of students from a low-income section of Los Angeles County can visit the Museum of Tolerance as part of the anti-bullying peer-mediation program that is available for them to attend because of donors’ generosity.

These are the things that matter. Nonprofits must be adept at telling their story in ways that show the good that happens, because they were the conduit that connected donors with a meaningful mission.

Sure, nonprofit organizations need to be able to transparently prove they didn’t buy Ferraris with donor dollars. Having accepted that as a given, let’s keep our attention focused on the mission, not the ill-defined moving target of overhead percentages.

Are You Focused on All 3 Areas of Leadership?

How to Know When It's Time to Close Your Nonprofit