3 Winning P2P Strategies You Should Steal

What if you could send hundreds of volunteer ambassadors into the community to recruit for your walk? What if you could deliver on parts of your mission promise at the same time? At least one nonprofit does just that.

The National Alliance on Mental Illness (NAMI) runs a speaker program called “In Our Own Voice.” In this program, people who have experienced mental health illness describe the reality in talks given in their communities. As part of the talk, the “In Our Own Voice” presenters talk about the NAMI walk program, NAMIWalks. The walk program is presented as a chance to be with others who have an understanding of living with mental illness.

“We have two individuals with lived experience with mental illness present to a community audience. We have presentations to psych wards, to other classes that we do, to community events, to mental health events; we get to a big audience. They start with the dark days, and then talk about steps to recovery and hope and dreams as the end to the 45-minute presentation. Individuals, all volunteer with a stipend, are trained, and they stay on task. 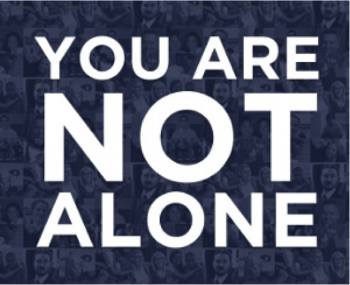 Often they talk about their use of meds or suicide attempts and or ideation, about feeling different but not knowing that they are different. Then they share a story of someone befriending them, asking 'are you ok, want to talk to someone?’ They really open up about going thru that process and the later recovery."

Wayne noted, “Cancer nonprofits can’t do chemo at an event; we, however, can nurture at an event.”

Wayne told a story about his Santa Monica event at the 3rd Street Promenade. He shared:

"People there wanted to know what we do at NAMI. Many would write a check on the spot. One lady, in respite care in Santa Monica on that weekend of our walk, saw people walking by with signs, posters, raising their hands. Her son had just tried to commit suicide. She was devastated and was just trying to get out of the house for a moment. She saw this group of people having the same experience. She wanted to be part of that. She wanted to get away, but instead she joined a group to help her heal, a 2,000-person group. Mental illness is isolating for individuals and for families.” 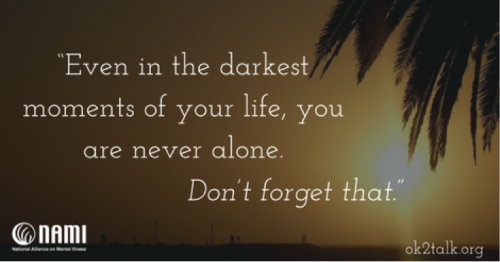 “Rudy is a totally empowered individual regarding his own health and life. Rudy publishes video recordings of his work, including this one. From it I quote Rudy: ‘Birds born in a cage think flying is an illness.’”

Wayne talked about the crossover by the presenters into other parts of the organization. As an example, he pointed to Amanda Lipp, a national board member who talks in her presentations about the first time she was hospitalized. She said that she was given box of crayons to help her describe how she felt. Now, she is part of national leadership at NAMI and is a well-regarded and sought-after motivational speaker, frequently using her “box of crayons” story.

While the “In Our Own Voice” program is nationwide, in Los Angeles County alone, there are 75 trained presenters who do 300 presentations a year to people in the audience who cared enough about the topic to show up. That means we have a self-selected high interest audience sitting there listening to the message.

"We reach between 3,000 and 5,000 people a year. We leverage the ‘In Our Own Voice’ program by letting all those attending know when the walk is scheduled and how they can get connected. We survey the audience and we ask them if they have interest in walk. It is a powerful acquisition tool.”

While there are no firm metrics, Wayne believes that 15 percent of their walk audience is recruited in this fashion—from volunteer speakers delivering on the mission to the community.

We think the folks at NAMI are far more clever than they give themselves credit for. NAMI links fundraising and mission delivery in three important ways:

There is a lot of psychology involved in these three things. More than 40 years ago, Yale University conducted multiple studies that would lead to what is known as the “Yale attitude change model.” Researchers looked at the conditions under which people are most likely to change their attitudes in response to certain messages. Among other things, the model says that two critical factors in creating attitude change are that the speaker being credible and their message should not appear to be designed to persuade.

Volunteers telling their stories hit these two out of the park. Who is more credible than people brave enough to publicly describe their most difficult struggles? Coupled with the fact that there isn’t any sense of a “sales pitch” about the organization creates a powerful message that results in strong positive attitudes about NAMI among people being recruited to the organization.

Talking to others on behalf of NAMI has a strong effect on the volunteers as well. Psychologists know that having someone discuss their attitudes—in this case about mental illness and the positive role that NAMI plays—increases that attitude. So every time a volunteer stands up before a group and tells their story, they become more strongly attached to NAMI’s mission.

Finally, NAMI provides people with a sense of community while giving them an outlet to do good for others. In his book, “Drive, The Surprising Truth About What Motivates Us,” author Daniel Pink describes how people who are most satisfied with their lives usually talk about having a sense of purpose. What this often translates to is finding “something bigger than oneself” to become involved with. NAMI, like other mission-driven organizations, provides a structure for people to experience a sense of purpose.

“I love the marriage of mission with revenue. That’s why I am here. It is a fun challenge to expand what is happening at walks. We need more affiliates to grow awareness and fundraising. What we do is so important. Sadly, in the last year it has become even more important. The impact of mental illness has grown on academic organizations, on prisons, on homeless people, on those with other socio-economics issues. We can’t help without fundraising and breaking the stigma. People treat mental illness like it is a choice. We don’t treat someone with cancer like it is a choice. It makes me angry and commits me to the mission.”

Clever, and clearly committed—get out of NAMI’s way.