I’m a total convert on the topic of monthly donors. I’ve seen its power and how it has kept an organization going after a major disaster. I’ve seen how it generates 50 percent of an organization’s revenue. I’ve seen that even small tweaks to organizations’ communications can make a difference.

The good news is that fundraisers’ lives have become so much easier with new systems that support generating monthly/recurring donors/sustainers. So, if you have a monthly donor program, congratulations! If you’re just starting out, wonderful! Keep it growing! But, if you’re still not convinced or if you need “ammunition” to spend a little bit more time and resources on your monthly donor program, here are some great reasons why you should jump on that monthly donor bandwagon today!

First, let me tell you about a small rescue organization. Their president contacted me a while back and told me: “We have 2,500 donors and about 300 of them are monthly donors. How can we grow it?”

Let me share this (mind-blowing) statistic with you: Their 300 monthly donors generate almost $90,000 a year! The president was very eager to grow their program. He was a financial whiz and saw its tremendous power. He did not need any more convincing. Just think, what can you do with the funds raised if you could grow your monthly donors to that level or even higher? You can hire more staff. You can provide more services.

Here are the three major reasons why monthly donors are so powerful, even though these donors seem to be so small (at first):

I’m not making this up. There’s wonderful research that shows monthly donors give three times more money than one-time donors. I’ve looked at the very few studies that exist on monthly donors (or sustainers as some refer to the program). And I am eternally grateful for the data contributed by Blackbaud. The 2016 Target Analytics™ Sustainer Benchmarking Study is truly the most thorough study done in our industry on sustainers. It’s important to note that organizations have to have at least 4,000 sustainers to be included. The 2016 results are based on 36 unique organizations, with a combined $1.97 billion in revenue and 16.3 million donors in total. Yes, it’s an absolutely big picture, but great to strive to and terrific for trends! Two highlights to note:

1. From the 36 organizations in the study, 15 percent of active donors were recurring, generating 19 percent of their annual revenue.

The number of one-time donors for these organizations has decreased in the past year, but the number of monthly donors has increased. Okay, I hear you say. Wait, we’re not that big. That’s why I looked at a second study from Third Space Studio—the Individual Benchmarking Report—which you can view at goo.gl/fA2ysG.

This report was based on 199 organizations raising $2 million a year or less and showed that smaller organizations with monthly donor programs see 14 percent of their income come in from recurring donations. The 2017 survey just went out, and the report is not due for a few months. These studies are at both ends of the spectrum. No matter your organization size, you’ll be able to identify with them. So let’s address these reasons one by one.

Monthly Donors Will Give More Than One-Time Donors

You can see that those donors who were acquired in 2013 as single-gift donors generated $139 after 4 years. Those that were acquired as monthly donors right away generated $429, so three times more than one-time donors. 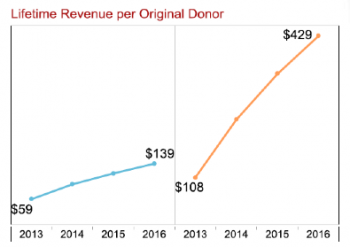 An earlier study looked at those donors who gave one-time gifts in the year and how much they generated once they became recurring. We saw that they generated twice as much per year.

Figure 2. This earlier study also looked at those donors who gave one-time gifts in the year and how much they generated once they became recurring. Again we see that they generated twice as much money compared to those one-time donors.

This trend still holds true 2 years later. The average gift is $23 per month or $276 per year, which is so much higher than any one-time donation. Web/digital donations generate the highest monthly gifts.

From Third Space Studio’s report, we learn that those organizations with recurring donors generate an average of $754 annually compared to one-time donors’ average of $208, so again, you’ll raise more money.

It’s all about donor retention. How can you get donors to retain at higher levels than what we’re seeing now, which is 46 percent overall (via 2016 Fundraising Effectiveness Project). Voila! Monthly donors are the answer.

Conclusion: If you convert your donors to give monthly, your donor retention rate improves!

Generating New Monthly Donors Has Become Much EasierThan Before 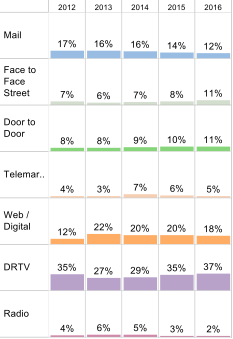 Figure 3. In this chart, you see that direct mail, telemarketing and web/digital platforms are still favorites in generating new monthly donors. Bigger organizations can afford to invest money in other channels—direct-response television, face-to-face fundraising and door-to-door fundraising—as ways to generate monthly donors.

From Third Space Studio’s report, we see that $1 in every $5 comes in online. So, as long as you have your monthly donor donation page organized—and there are now many options to do this affordably and easily—you have the tools to start generating monthly donors, regardless of your organization’s size.

Conclusion: You can start growing monthly donors using web/digital and expand to other channels later.
I hope these three reasons help change you or your bosses’ mind about how small donors can become so tremendously powerful once you convert them to give monthly. So, what are you waiting for?

All study data was provided by Blackbaud. For more information, contact Amanda Williams at amanda.williams@blackbaud.com.