Meta to Match Recurring Donations Through Facebook for Giving Tuesday

Meta announced a new promotion that will encourage users to donate monthly to nonprofits after unveiling new Facebook tools for recurring gifts.

Meta will match 100% of the donations after the second gift is made via Facebook’s charitable donation features. The match is up to $100 per donation, $100,000 per nonprofit, and $7 million in total between Nov. 15 and Dec. 31. Donations made on Instagram and outside of the Facebook fundraising tools are not eligible.

Network for Good will be processing the matched donations on behalf of Meta, according to the promotion’s terms. Meta will continue to cover processing fees to allow the full donation to go directly to nonprofits. 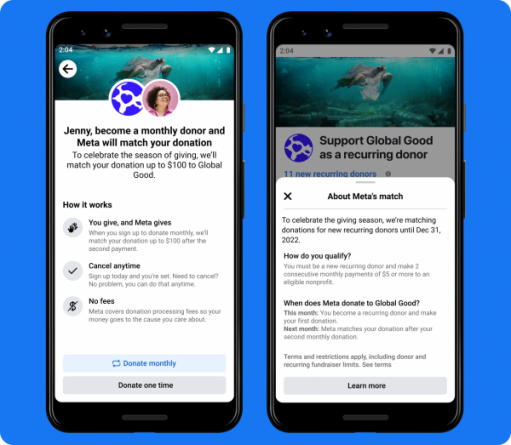 Fundraisers across Facebook and Instagram have brought in more than $7 billion in donations for nonprofits. More than 80% of donations in 2022 came from user-created fundraisers shared with family and friends. The top grossing fundraisers this year have been centered around the aid in Ukraine, the COVID-19 crisis in India and the wildfires in Australia.

In 2021, Facebook matched up to $8 million on Giving Tuesday, with 100% of the initial $2 million and 10% after, up to $100,000 per nonprofit and $20,000 per donor. However, this year’s promo could have a larger impact if the promotion can yield long-term supporters to benefit a variety of causes year-round.

“This is a shift from how we’ve historically matched one-time donations on Giving Tuesday,” Emily Dalton Smith, Meta’s vice president of product management and social impact, said in a blog post. “As we celebrate the 10th anniversary of this global day of giving, we look forward to helping organizations sustain support far beyond the holidays.”

The 2022 promotion complements new recurring giving tools that Meta recently rolled out. The tools allow U.S. nonprofits to manage long-term donors on Facebook via its Nonprofit Manager. Here is an overview of the new features:

Data analysis. The insights tab offers new recurring donation metrics, like the number of recurring gifts from various sources and total dollar amount per month in graph form. On the supporters tab, recurring donors will be tagged for easy filtering to analyze your supporters. In addition, transaction reports now distinguish between one-time and recurring donations.

Donor Cultivation and Retention. WIthin the next two weeks, nonprofits will also be able to cultivate new recurring Facebook donors with an automated, multistep welcome series campaign to message each donor over the course of the first few weeks after that initial donation. Upon donating — or creating Facebook fundraisers — Facebook users will be prompted to connect directly with the nonprofits they support by following the organizations’ pages, allowing Messenger contact and sharing their email addresses. These options will be the default, but users can deselect options, if desired, prior to clicking the “save” button. Opted-in supporters are available via Nonprofit Manager and reports.

Campaign Acquisition. Similar to other Facebook fundraisers, the recurring giving campaign tool provides nonprofits the ability to create time-sensitive fundraisers for recurring donations. Nonprofits can target the number of donors they wish to gain as opposed to a monetary goal.

Related story: Facebook to Partner with GoodUnited for Challenges