3 Ways Your Nonprofit Can Use 'Pokemon Go'

Everyone and their moms are on "Pokemon Go." (No, really—my mom has it, too.)

And the data backs that up.

According to data from SensorTower, the free, augmented reality game that lets users find various Pokémon out in the real world has been downloaded nearly 7.5 million times from Google Play and the iOS App Store in the U.S., TechCrunch reported.

That is a whole lot of people who are getting outside, discovering new areas and meeting new faces. So how can your nonprofit use this rocketing app to its benefit?

Follow your fellow nonprofits’ lead: Embrace the hype. Getting more people to stop by means you have that many more people to introduce your cause to.

Beth Kanter rounded up a great collection of how nonprofits have been using the game to their advantage. Here’s what we took away from their efforts.

1. Download the app and showcase the Pokémon near your location.

The hunt is on. Wannabe Pokémon Masters are looking for Pokémon wherever they go. Actually, they specifically are going places just to look for them. Posting a picture with Pokemon you’ve found on your own grounds will let gamers know they should stop by (and that you’re hip enough to have downloaded the app).

Seriously, don’t you want to visit the National Mall and the 92nd Street Y now? (We also want to go to Crystal Bridges Museum of American Art and hang out with Pikachu.)

2. If your location is a PokeStop, embrace it.

If your location has been designated a Pokestop, a place of interest where users can stock up on Pokeballs—and snacks and medicines for their captures, you probably already have seen an increase in traffic. Users naturally will want to visit your location. View this as an opportunity, not a nuisance.

For those organizations that want to draw extra attention and visitors to their locations—say, for instance, when their hosting charity events or special programs—there is the “Lure Module.” The in-game item is available for purchase and attracts additional Pokemon to the location for 30 minutes. And people go where the Pokemon go.

Not a Pokestop? According to Forbes, those locations were pre-determined by the developer, Niantic Labs, but with the huge, immediate success of the app, it may just be a matter of time before it becomes a new marketing opportunity.

3. Find creative ways to integrate your cause into the game.

Now, your organization probably isn't Pokemon-centric, but, as you've seen, that doesn't need to stop you from joining the fun.

One of the biggest benefits of the game is that it’s pushing people to be more active. After all, they have to go to the physical location to catch a Pokemon. ("Pokemon Go" players who also wear Fitbits love life right now.)

One Facebook user pointed out that this is the perfect opportunity to encourage gamers (and cause supporters) to download WoofTrax, an app that donates to animal shelters whenever its user walks with or without his or her dog, ATTN reported. While the apps aren’t related, they can be used at the same time—melding the exercise of hunting for Pokemon with giving back.

Two days ago, I received an email that shared a similar sentiment from Charity Miles, an app that let's users earn money for various charities while on the move. In fact, the whole purpose of the email was to encourage the user to join the "Pokemon Go" Challenge. Through the challenge, not only are users earning money for charities, but when they take a screenshot of a Pokemon sighting on their walks, upload it to the app and share it on social media, they are entered to win a Charity Miles T-shirt. 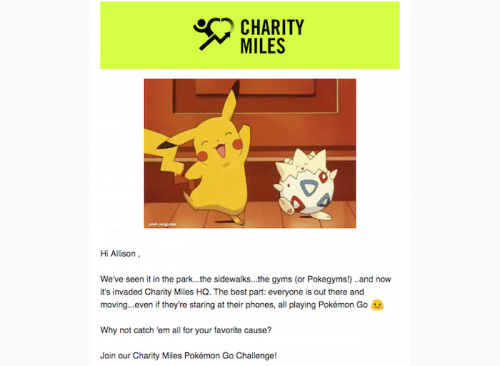 The Durham Bulls, a Triple-A affiliate for the Tampa Bay Rays, also came up with a fun way to give back. Yesterday, they opened up their park for fans to search the stadium for Pokemon, CBS Sports reported. It cost $5 to enter—and all proceeds went to a pet adoption charity.