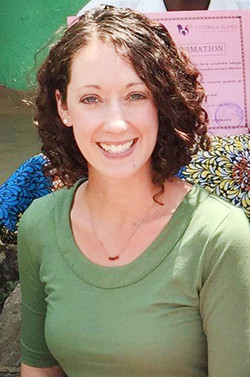 Jumping into leadership at a nonprofit is no easy task, but Katie Patrick has a determination to help the poor and marginalized in her state of Nebraska and around the world. As the founder of a nonprofit in the Democratic Republic of the Congo and newly promoted to the role of executive director of Catholic Social Services of Southern Nebraska, Patrick is making waves in the nonprofit sector and, therefore, has been awarded Nonprofit PRO’s 2022 Rising Star Award.

It was only 18 months ago that Patrick was tapped to lead the nonprofit headquartered in Lincoln, Nebraska, with outreach centers in Lincoln, Auburn, Hastings, and Imperial, Nebraska. Patrick, who became the first woman to lead the organization, oversees the nonprofit’s 75-person staff and $6 million budget, which reached multimillion-dollar status for the first time in its 100-year history on her watch. Patrick is also leading a $3.5 million renovation and expansion of the nonprofit’s headquarters that began this fall.

At its food market, she transitioned the model to allow food choices for clients instead of presorted packages. Additionally, through several partnerships with other local nonprofits and businesses, she expanded services to include trained volunteers providing clients with nutritional guidance, giving away high-protein breakfast burritos to the homeless, and building a community garden, which is currently in progress.

She has done a lot for immigrants and refugees in her community as well. She oversaw the resettlement of 134 Afghan refugees, as well as more than 50 refugees from Syria, the Democratic Republic of the Congo and Ukraine. Additionally, she established a legal services program that allows immigrant and refugee workers at employers like Tyson Foods to fill out proper documentation at their worksites instead of having to take off work to do so. She also encourages staff to create partnerships with other nonprofits, like Asian Community and Cultural Center — where she previously worked — and El Centro de las Américas to provide wraparound services to better serve community members.

“Katie Patrick’s professional background has, in large part, focused on building relationships with diverse populations and collaborating with human service agencies and other resources to refer services for the refugees and immigrants,” her nominator told NonProfit PRO. “She has done that extensively at CSS, and she honed those skills both in the U.S. and abroad.”

Leading a nonprofit isn’t new to Patrick. In 2014, she founded Totonga Bomoi, which educates artisans and entrepreneurs about cooperative formation and business development in the Democratic Republic of the Congo. Stateside, she has given back to a variety of nonprofit organizations throughout her career, with her resume showcasing roles as program, grants and case managers. However, she has particularly made her mark at Catholic Social Services, serving as a refugee case manager earlier in her career before returning in 2019 as regional director of services and then executive director.

Patrick has her bachelor’s degree in international studies, history and German from the University of Nebraska-Lincoln and a Master of Arts in diplomacy and international relations. She also serves on the board of the Emergency Food and Shelter Program.

“As executive director of CSS for just over a year, Mrs. Patrick has established a thriving agency that continues to broaden its footprint in order to serve more people and bring them more hope,” her nominator told NonProfit PRO. “She is a compassionate and determined professional who seeks to instill and cultivate all that is good, true, and beautiful into the workplace and at home.”