‘We Are All Related’: A Fundraising Pioneer’s Search for Community and Understanding

Brent Kennedy was a man on many missions — personally, professionally, intellectually. As a writer, historian, fundraising consultant, musician, athlete and, to me and many others, a mentor and inspiration, he was a true modern Renaissance man.

He was also a Melungeon — a heritage unknown to Brent until he contracted a curious medical condition. In 1988, while he was VP of the fundraising consulting firm Haas Coxe & Alexander, Brent was diagnosed with sarcoidosis, an autoimmune disease found more commonly in those with African descent or Mediterranean descent.

The diagnosis kicked Brent’s curiosity into high gear. In addition to his determination to mitigate the effects of the illness, which included using a wheelchair and cane to help his mobility, he started on a 17-year personal journey of discovery about his heritage. A difficult journey at times, his ancestry was to eventually include Middle Eastern, African, European and Native American blood.

Brent had moved on to become senior managing partner and COO with Jerold Panas, Linzy & Partners, which is where I met him. Working with Brent and Jerry Panas, I got what I would call a doctorate in consulting, learning from two masters. 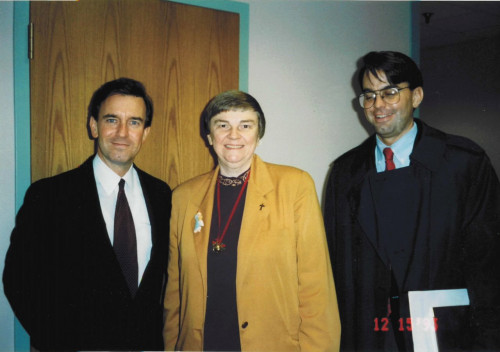 In 1995, Brent’s personal journey lured him back to his Southwest Virginia roots. Historically, Melungeons are associated with the Cumberland Gap area of central Appalachia, which includes portions of East Tennessee, Southwest Virginia and eastern Kentucky. Returning home, Brent served as vice chancellor for development and college relations at The University of Virginia’s College at Wise and then as president of the Wellmont Foundation and SVP for institutional advancement for the Wellmont Health System.

All the while Brent continued his research, and ultimately became one of the leading scholars on the Melungeon people. He was instrumental in establishing the Melungeon Heritage Association and authored the book “The Melungeons: The Resurrection of a Proud People.”

The zenith of his research came to be that we are all “One people, All colors.” This became the driving force in his life after that. Brent wanted people to understand, without a doubt, that everyone in the world is connected through the generations. And with this understanding, we can all achieve a more peaceful and compassionate co-existence.

“We are all related and of mixed heritage,” Brent said. “We trust what we are told as children, and it's not always correct. Secrets are kept.”

“I was amazed to discover my own ‘Appalachian’ DNA breakdown showing 55% Middle Eastern,” he shared. “Maybe that's why I always felt so at home on my many trips to Turkey and Cyprus. Seeing the refugee and immigrant migration from the Middle East to Europe broke my heart. For the most part, these are people like you and me just looking for a better life. It's probably how my family got here.”

“The truth will bring us together,” he said. “Always ask questions no matter where it takes you.”

Brent’s story doesn’t end with his illness and subsequent research, for life had another curveball to throw at him. While Brent was delivering the eulogy at a friend’s funeral in 2005, he suffered a devastating stroke that resulted in a coma, a year-long hospital stay and years of rehab therapy and medical procedures.

But his story doesn’t end there either. With God’s grace — and his own sheer grit and determination — Brent outlived his stroke for close to 15 years—succumbing this past September. His very survival epitomized his lifelong motto of never giving up.

Just like he did when I met him, when he first became a close friend and mentor who guided me every step of the way toward creating Lighthouse Counsel, Brent continued to inspire through his determination, his conviction, his gregarious nature and sense of humor, despite being incapacitated and unable to walk or talk as the result of his debilitating stroke.

Brent is widely known as one of the great minds in modern fundraising. He earned a Ph.D. in mass communication research with concentrations in marketing/public relations and a secondary concentration in higher education management at the University of Tennessee. Even then he was destined for success in the still-evolving field of advancement, also known as fundraising. He went on to evolve a style and an understanding that should serve as an example to anyone in the field.

“Brent was without a doubt one of the most intelligent people I have ever been around,” shared Emily Myers, president of Myers-McRae Executive Search and Consulting, as well as the former SVP at Mercer University, where Brent served as senior associate VP for development. “He was such a great personality. I loved to go on a fundraising call with him.”

“Brent was always so smart and quick with his wit that he could carry on a conversation with anyone,” she shared. “He would find something in the context of that visit that would be humorous and entertaining for the donor. He could build a relationship and gain their trust and confidence in him. They loved him when they met him because he was warm and cheerful.”

“He was one of the really great people in fundraising. He was bright, talented, charming, humorous — one of the very best,” Emily shared.

Brent’s personality, which could be playful and mischievous, while also being comforting and inclusive, engendered trust — a keystone for solid donor relationships and success in fundraising.

“He had a really good mind. A creative mind,” said Del Martin, the former chair of Alexander Haas Martin and founding partner of Alexander Haas and who worked with Brent as a consultant. “He grasped strategy very easily. It was a pleasure discussing strategy with him. He was very quick.”

“Everybody wanted to make Brent happy,” she shared, calling his puns and jokes endearing. “He was so positive. He was so nice. I don’t remember him ever losing his temper. And he influenced others to be positive and nice,” she shared. “It had a ripple effect.”

When working with Brent, you moved at a rapid pace. I found him to always be positive and continually crafting the strategy and connections that would make a big vision a reality. He always had a sincere desire to connect with and lift up everyone he met.

That desire played out in many ways, at different times, like when he stood behind a prospective donor during a meeting so that only I could see him as he donned a fake mustache. The look on my face gave pause to the donor. But of course, when he turned around, all he saw was Brent standing there with no moustache and an intense, friendly expression.

Always true to whom he was, Brent retained his sense of humor, even in the face of adversity.

“There was no one more gregarious, engaging, enthusiastic,” says John O’Kane, distinguished professor of practice at Georgia State University and principal at John O’Kane Consulting, who worked with Brent at Haas Coxe & Alexander. “He was always up, always looking for a connection.”

“One of the challenges as a consultant is that some clients want to feel like no one else is like them,” John shared. “You have to be able to move that client where they will act on your best advice. By being able to endear himself, the client was more motivated to trust Brent and want to move in the direction that he recommended.”

According to Jay, now president of Academic Search, Inc. and president emeritus and senior fellow at Susquehanna University, “Brent had ‘wow’ as a strength in abundance. He also had positivity in abundance. He had the ability to have a large vision and this great capacity to connect people.”

It was Jay who recruited Brent to return to his undergraduate alma mater, The University of Virginia’s College at Wise, when Jay was serving as chancellor of the college. Brent led the school’s advancement program and expanded his research on and advocacy for the Melungeons.

He recalls a trip to Turkey where Brent was welcomed as a hero — his picture on a billboard. He described Brent as “a rock star in Turkey.”

Part of the Melungeon history is that Turkish-Moorish slaves had been set free in the U.S. and settled in Appalachia.

“Brent opened possibilities of kinship and understanding,” Jay shared. “He became compelled to tell the story of a marginalized people — the Melungeons. He got people to think about their own history.”

“Brent could put the legs on dreams of people who cared about projects larger than themselves,” Jay shared. “Though his stroke had robbed him of some of his capacity, including speech, it had not robbed him of his spirit and passion.”

Jay recalled his visit with Brent after his stroke.

“It was within seconds that our eyes met, and the life and energy of Brent was there in full,” Jay said. “Since the stroke, it was uplifting to see his persistence. Brent was someone who would never give up. He always dreamed and that didn’t change.”

Brent was relentless in his passion for knowledge and his hunger for understanding. He wanted the world to understand that differences between races and backgrounds are, at best, superficial. That which lies beneath is what unites us.

It’s not always easy to see the connection, but it’s essential.

“We can claim to be whoever we want to be, but the truth may be very different,” Brent said.”

“You are you. Be proud of who you are, who you were intended to be,” he shared. “Always help others. God loves you. Life is often a struggle, but it is a test. You can pass it no matter your age. Never give up. Keep searching.”

Looking for Jeff? You'll find him either on the lake, laughing with good friends, or helping nonprofits develop to their full potential.

Jeff believes that successful fundraising is built on a bedrock of relevant, consistent messaging; sound practices; the nurturing of relationships; and impeccable stewardship. And that organizations that adhere to those standards serve as beacons to others that aspire to them. The Bedrocks & Beacons blog will provide strategic information to help nonprofits be both.

Jeff has more than 25 years of nonprofit leadership experience and is a member of the NonProfit PRO Editorial Advisory Board.

Practice Is the Road to Perfection
Comments
Subscribe
Find Resources