One of the things that our data on peer-to-peer programs tells us clearly is that getting peer-to-peer early registration from participants results in greater fundraising. But why? How does it actually work? Not the way you’d think.

Turnkey client results show that participants who open recognition emails on average raise substantially more and are less likely to be zero-dollar participants than those who do not. Our research also shows that often clients’ participants register too late to get any emails at all from the organization. That leaves money on the table. The following data from a recent client’s early registration program is typical. 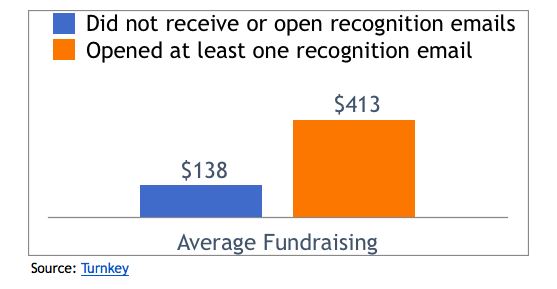 So far, all this is not too surprising. Typically, an “early reg” campaign pushes participants to register and raise some amount of money by 30 to 60 days before the event. A typical early reg campaign for Turnkey runs for eight weeks and includes messages which recognize the individual as they register, raise $25, $50, $75, etc. on the way to their early fundraising goal, often $100. The messages recognize the individual fundraiser at each step of the way, and they also encourage them to continue fundraising. When the goal is achieved, they are recognized with a branded item, which ideally can be worn at the event and serves as a symbol of their success.

However, we’re beginning to rethink the logic behind this program. It turns out that early fundraising really isn’t the key to a bigger bottom line at the end of the event. The key to greater overall fundraising is instead that participants just register early. Forget the early fundraising, just focus on registration. How can we explain that?

In his classic book, "Influence: The Power of Persuasion," social psychologist Robert Cialdini describes the “foot in the door technique.” How do you get that first behavior on the part of an individual to comply with your requests, in this case, to fundraise for your organization? The important thing to remember is to make it as easy as possible for people to say “yes.” The bar for just registering to fundraise for an event is a lot lower than committing to both register and fundraise $100. If the goal is to get people interacting with us earlier, we want to make it as easy as possible for them to get involved. Then we can ask them to start fundraising, right? Wrong! That assumption is part of the reason that, according to Blackbaud, peer-to-peer events consistently have 68 percent of registrants who are zero-dollar fundraisers.

Once people have registered, leverage another of Dr. Cialdini’s psychological tricks. Appeal to people’s “consistency bias.” When people register for the Walk to Cure XYZ, recognize them just for registering. Tell them that they are awesome, now they’re part of your tribe, and you’d like them to redeem for a Walk to Cure XYZ bracelet, t-shirt, pen—anything with the event’s name and logo on it.

Why is it important to get them to redeem for the item, to ask you for it? Why not just send a bracelet to everyone who registers? In addition to the cost savings of redemption versus a blanketing of items, there is an important psychological principle at work. Put yourself in their shoes. What kind of people redeem for nonprofit swag? Supporters! People are highly motivated to see their behaviors as being consistent. Once they ask for the item, their consistency bias kicks in, and they are much more likely to say yes to more significant requests, like fundraising $100 for the event.

Sometimes clients push back from this approach; they are reluctant to spend the dollars needed to send a bracelet or some other swag without getting a quick return. But the data tells us it’s well worth the investment.

Another pushback we get from clients is this: “The people who will register early are the ones who are going to register anyway, the stalwarts.” To this, we say, “EXACTLY!” These folks know they are going to register; they register every year. They have no reason to register any earlier than they must. So, give them a reason to register early, and it won’t take much because they already love you. Like everyone who exists at any point on the affinity spectrum, you can move them to a different space, and they will raise more money for their mission of choice. If they register early, you have longer to move them inch by inch to greater affinity, closer to you.

At the end of the day, early registration is about getting the most people possible into your pipeline. Once they are there, it’s up to you to manage the relationship into something more… incrementally and thoughtfully.