Why You Need to Know About the Donor Hierarchy of Needs

In a recent post, I clairified why you must Make ‘Do Unto Others’ Your Nonprofit’s Golden Rule. Stop asking what your donors can do for you. Ask what you can do for your donors. Because donors have needs too!

In fact, they have needs that no one can satisfy but you. If you can learn more about what these needs are and how to meet them, you’ll ensure that giving becomes transformative over the long term—both for your organization and for your donor.

Your goal should be to build life-long donor relationships. Sadly, most nonprofits do a lousy job of this. They get one gift, and then they lose that donor and have to go find another one.

According to the 2015 Fundraising Effectiveness Report, last year, gains from new and recaptured lapsed donors were more than offset by losses in the number of lapsed new and lapsed repeat donors—for a net loss in donors of -1.4 percent. Yipes!

Do you want to be the exception? Then you have to be of greater service to your donors. To do this, you’ve got to get inside your donors’ heads.

So, let’s delve more deeply into how your nonprofit can use a bit of psychology, neuroscience and empathy to meaningfully meet your donors’ needs.

You may be familiar with Maslow’s “Theory of Human Motivation,” where he breaks down needs for human development and contentment into steps that form a pyramid. Maslow suggests the basic human needs, such as food, shelter and sleep, are required before you can pursue higher needs, such as security, love and belonging, esteem, and the need for self-actualization to achieve your greatest individual human potential.

I’ve tweaked this model to create a paradigm I hope will help you in shifting your culture to put donors at the heart of your mission.

The Donor Hierarchy of Needs

In ascending order, from the most functional and satisfaction-based to the most deeply psychological, resonant and meaningful.

First and foremost, you must show donors you are a survivor. You have all the basics in place to live long and prosper. You will fulfill the promise of your mission. Donors don’t want to see their philanthropy go down the drain.

Begin at the beginning by showing how efficient you are. Get an immediate, personal thank-you letter out. If they’re a major donor or a first-time donor, call them! Make a great first impression. Then, send updates to assure donors their gifts are being put to use as they intended.

Make sure that every contact with your organization is satisfying. Stay away from a culture of “it’s not my job,” in which callers get routed from one person to the next. Ensure that everyone is a “solution broker” from the donor’s perspective.

Instill confidence and trust that the donor’s investment is safe. Again, make sure they hear from you right away so they don’t wonder if their gift was received. Tell them how you’re using the money so they’re confident it’s being allocated as they directed. Show them you paid attention to any special instructions (e.g., let them know their gift will remain anonymous or that you’ll send a tribute card if this is what they asked for).

Don’t just talk about yourself. Show donors the impact of their giving by sending periodic reports, videos, photos and thank-you’s from those they are helping. Thank and report repeatedly. Donors want to know that you are stewarding their philanthropy effectively over time.

Humans are essentially tribal. The drive to join is deeply ingrained—a result of a complicated evolution that has led our species to a condition biologists call “eusociality.” “Eu-,” is a prefix meaning pleasant or good. The eusocial group contains multiple generations whose members perform altruistic acts, sometimes against their own personal interests, to benefit their group.

Eusociality is an outgrowth of a new way of understanding evolution, which blends traditionally popular individual selection (based on individuals competing against each other) with group selection (based on competition among groups). Individual selection tends to favor selfish behavior. Group selection favors altruistic behavior and is responsible for the origin of the most advanced level of social behavior—that attained by ants, bees, termites and humans.

Invite your donors into your community. Send welcome packages to new donors. Create special giving societies (aka “tribes”). Send “insider” newsletters. Offer behind-the-scenes tours. Treat your supporters as members of your family, with all the attendant benefits (and spell these benefits out).

Just giving to charity doesn’t necessarily meet the higher level needs. It's not its own reward. Donors may give out of guilt, fear, peer pressure, a need for acceptance or other reasons that don’t make them feel particularly good. They’re looking to you for the payback.

Do you have a “Donor Payback Plan” in place?

Do you know what puts the fire in your donor’s belly? Endeavor to find out. The more you want to sustain your donor’s commitment over time, the more proactive you must become. This means reaching out consistently over time to facilitate human connections— welcome your donor to the family, make your donor feel embraced, reward your donor’s sense of esteem, praise your donor for being a wonderful, unique and caring being. Show your donor how much their actions mean and how significant they are to you. 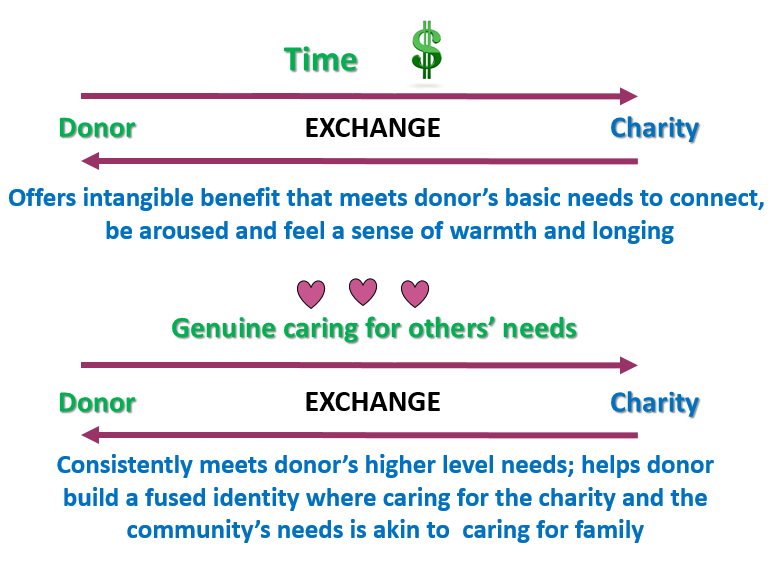 Creating life-long donors requires meeting highest-level needs, where donors feel identified: “I’m a Greenpeace supporter.” They incorporate their affiliations with you as part of their being.

Psychologists call this being self-actualized. In non-psychological or theoretical terms, at the self-actualization pinnacle, donors just feel darn good. They carry around a warm glow, representing the realization of their potential and inner peace.

This feeling is very powerful, and we human beings naturally seek it out. It’s one of the reasons why even very poor give outsized proportions of their incomes to charity.

Humans want to feel a sense of connection and a sense of purpose to life. Giving (time, money and energy) is a central way we strive to find meaning.

If your nonprofit doesn’t complete the exchange circuit for donors, their search for meaning gets cut short.

Too often, charities (well, the people in them) don’t think very highly of their donors. They ascribe all sorts of selfish motives to donors’ giving. Have you ever heard:

Sure, maybe some of this happens. But it’s a very shallow, mean-spirited way of looking at donors. I’ve never met a donor where this was all that motivated their giving. Human drives are much more complex.

Maslow posited that once the basic “physiological needs” are met, people are wired to move on to fulfill the unmet “deficiency needs,” such as love, belonging and esteem. The ultimate need, however, is not so much a deficiency as an imperative. Maslow stated about the self-actualization stage:

This is the level at which transformation occurs.

And it’s so important for nonprofits to hold this close as their end goal whenever someone makes a donation. The first gift is simply a one-time transaction. If you consider that your end-game, it will be. Simply put, you’re unlikely to get a second donation.

You must take donors on a transformative journey that gets them to self-actualization.

Maslow describes this level as the desire to accomplish everything one can, to become the most one can be. And this is where nonprofits can really make a difference. You, yes you, have the power to give your donor the meaning he or she seeks.

In the year ahead, I encourage you to embrace your power. And empower your donors. You both deserve it.

Donor Love: 5 Things to Do (and 1 Definitely Not to Do), According to Shakespeare
Comments
Subscribe
Find Resources