What Makes People Give? Fundraising and Behavioral Economics From the Guy Who Wrote 'Moneyball'

Professional fundraisers usually don’t list “behavioral economics specialist” in our skill-sets. Now is the time to change that. To help understand why, we turn to author Michael Lewis. His work is worth a long weekend on the back porch with a cup of joe or two. His work will help you raise money.

Lewis has a keen eye for finding great subject matter and spinning it into a narrative for popular consumption. His sweet spot is unearthing the quirky and unexpected, which is exactly what we need to understand as fundraisers. How many of us have run campaigns that did not perform as expected? Or overperformed and we had no idea why? Something happened we did not understand.

Lewis likes the freakonomics aspect of human behavior. His books include “Moneyball,” which tells the story of Oakland A’s manager Billy Bean. Bean eschewed the traditional method of selecting players (by eye) in favor of a data-driven approach, which resulted in the team becoming a championship contender on a minuscule payroll.

His 2010 book “The Big Short” describes how a group of fringe stock-market brokers defied conventional wisdom and correctly predicted the collapse of the housing market, making a great fortune from their insight. “The Blind Side” told the unlikely tale of a poor black kid who is adopted by a well-to-do white family and makes it all the way to the NFL.

In each story, the heroes go with what data tells them, instead of their gut. The baseball manager doesn’t watch players play, he looks at their stats. The investors decide to short-sell the housing market when everyone else was buying subprime mortgages. A family took in a kid from the projects when their friends and family told them it was impossible. All three of these books were adapted for film and became major motion pictures. We like stories where the characters take an unexpected path to success.

In researching his various books, Lewis came face to face with a common question: Why do most people so often overlook information and wind up making sometimes colossal errors in judgment by following their intuition? Why do people listen to their gut? 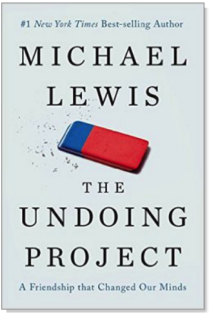 That led him to the work of two psychologists, Daniel Kahneman and Amos Tversky, then at The Hebrew University, who are the subjects of his latest book, “The Undoing Project: A Friendship That Changed Our Minds.” Their work on decision-making has had a profound impact on our understanding of human nature. So much so that Kahneman won the 2002 Nobel Prize in Economics (Tversky died in 1996). It turns out that there is no Nobel Prize in psychology, but their work has spawned a completely new area of economics known as “behavioral economics."

Their findings have been applied to sports, finance, medicine and government. So important is the pair’s work to psychology that the Guardian recently called them “psychology’s Lennon and McCartney.” Kahneman wrote his own bestseller in 2011, “Thinking Fast and Slow.” If you haven’t read it yet, you really should.

One of the pair’s main observations was that “no one ever made a decision because of a number—they needed a story.” Their research shows that humans make decisions based on emotion, not rationally. The key is to recognize these habits, and not confuse one for the other.

All this puts the professional fundraiser in a dual stance. On one side, we must ignore the emotion of a story when we make decisions. On the other, we must put forth our decisions in the form of a story the public is able to consume.

Measuring Impact: 5 KPIs Your Nonprofit Needs To Be Tracking

How To Perform a Database Cleanse

The Future of Social Good Is Now