How Netflix Subscribers Are Different From Monthly Donors

I love Netflix. It helped us do away with cable TV 10+ years ago. Now we live stream our favorite movies on our “older” TV. We still get Netflix DVDs in the mail, and we choose our favorite shows to binge-watch when we’re in that binge-watch mood. We’re in control of what we watch, and there’s always something on.

Netflix is just one example of that overall subscription culture that has grown a lot over the past few years. For example, DVDs, razor blades and meal planning are now coming through your door, on demand!

Just take a look at this, courtesy of Steve Froehlich from St. Jude and Polly Papsadore from PMG Direct, both of who have been on top of the subscription culture for a while now. 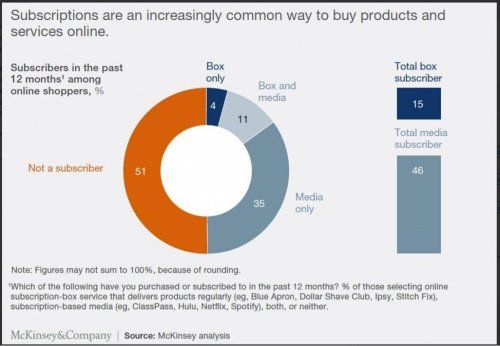 You can see the trends right here. You’d think this would show a promising future for monthly giving as well, as especially younger folks are more comfortable with subscriptions that are paid automatically.

And that is certainly true. More people are more comfortable using their credit card and their bank account to pay for subscriptions and monthly gifts. The most recent Blackbaud sustainer report showed that some 5 to 10 percent of monthly donors are now giving automatically from their bank account (EFT/ACH). Super news!

BUT, and this is a really big BUT: Just because people and donors are getting more comfortable with “subscription giving,” doesn’t mean everything is the same.

Some organizations are starting to make assumptions about monthly giving that may work for companies like Netflix, but they may not necessarily work for nonprofits.

Here’s why. There are two major differences between subscription users and monthly donors.

In the past few years, some organizations have started testing so called “involuntary upgrades,” mirrored after some European activities in the past. It’s important to remember what happened in Europe with the GDPR, which sadly is starting to come our way. So it’s important to tread lightly. The word “involuntary” is exactly that.

By doing so, these organizations are turning their donors much more into ATM machines than they’d really mean to. But more importantly, they could evoke major complaints from donors (or perhaps donors’ kids who are often much more vocal), which could lead for major problems for fundraisers and could jeopardize the future of monthly giving.

Ask for an extra gift. Ask for an upgrade. Let the donor choose. Make it a voluntary upgrade. You’ll raise more money, and you’ll create a much more positive donor experience.

You’re always better off asking your donors for permission and to indicate the new upgraded amount they’d like to give. You’ll raise a lot more money, you’ll keep your monthly donors happy and you’ll keep the future of our still growing monthly giving processes a lot safer.

How Can QR Codes Help You Generate More Donors?

Can You Have Multiple Monthly Donor Programs?