Judging by the volume of charitable contributions processed over the first six months of 2016, it appears to be another up-and-down year for America’s nonprofit organizations.

According to data provided by Merkle Response Management Group (RMG), which included direct mail contributions from 42 national nonprofits, the number of charitable gifts received through the mail this year declined less than .75 percent, as compared with first half of 2015. 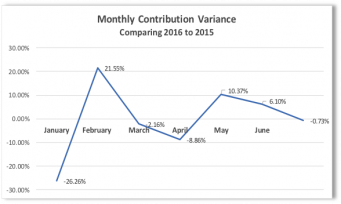 2016 got off to a rough start as the number of direct mail contributions processed in January declined by more than 26 percent, as compared with the prior January. The drop in volume was widespread as every sector of the industry was down in January. The degree of decline ranged by sector—from a low of 17 percent for conservation groups and 38 percent for animal rights organizations. Only four of the 42 organizations reported increased volume this year.

The good news is that the decline was short lived thanks to a sharp increase of gifts received in February—355,000 more contributions, or 22 percent more, than the previous February. Giving was up across the board, but it was strongest in the political/advocacy sector (which accounted for two-thirds of the increased volume). 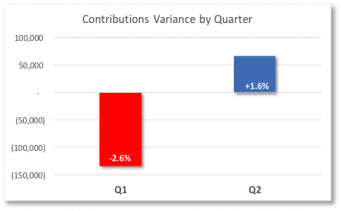 With April came another month of negative year-over-year results as gifts declined 9 percent, but thanks to two consecutive months of increased giving in May and June, the volume of contributions in the second quarter increased 1.6 percent—resulting in a total decline of .73 percent. That’s not bad considering the rough start to the year.

The Merkle RMG data we analyzed included direct mail contributions to organizations from five distinct segments of the charitable industry, including health, conservation, relief (international and domestic), political advocacy and animal rights. When combined, more than 9.2 million direct mail contributions were received over the first two quarters of 2016—about 1.5 million per month.

There are many different factors (both internal and external) that influence the volume of direct mail contributions, including changes in investment strategy, mail volume and schedule, campaign response rates, USPS delivery, competition, channel preference, and consumer confidence. It’s highly probable that a combination of factors contributed to change in year-over-year contribution volume.

A more in-depth analysis into the data revealed some consistent and concerning trends that impacted the first half of 2016 and that likely may carry over into the second half of the year. Some of the most significant findings include:

A “not-so-rosy” outlook is the general consensus for the balance of 2016. Most analysts caution that wishful thinking might not be a great strategy to embrace over the next six months, as consumers are expected to have a pessimistic short-term outlook on the economy—especially the middle class, where they continue to struggle (average household income today is about the same as it was two decades ago, once adjusted for inflation). Costs continue to rise, resulting in less disposable income available for activities such as charitable giving.

Atlas of Giving, which forecasts short-term charitable giving using a variety of economic indicators, also believes that nonprofits should brace for either a slight decline in giving (less than 1 percent) or, at best, a slight increase (1.4 percent). Consistent with the response data we analyzed, Atlas of Giving reported flat revenue growth during the first six months of 2016.

Fluctuations in direct mail contribution volume don’t necessarily correlate to variances in revenue, but in an industry where volume matters, it is a leading indicator as to the state of the entire sector. A prolonged negative trend in contribution volume is worrisome and indicative of a significant problem—one that we must stop pretending to have the answers to, because, guess what, the market says differently.

Between now and the end of the year, you really have only two choices—you can take the wishful “wait and see” approach or get serious about understanding how to dramatically increase the volume of people and contributions that support your organization.

The clock is ticking.

Greg Fox is vice president of nonprofit vertical strategy at Merkle. He joined the company in 2000 to establish a data-driven, strategic fundraising agency group. Fox is a 30-year veteran of direct response fundraising, with expertise in developing innovative fundraising marketing strategies and solutions. He has helped raise hundreds of millions of dollars for many of the largest and most respected fundraising brands in America, and while he has broad-based fundraising experience, he is highly regarded as a leader in the national health-charity sector. Prior to joining Merkle, Fox was a founding partner in TheraCom, a leading provider of full-service specialty pharmacy solutions and marketing strategies that served the healthcare and charitable industries. He also served as vice president of direct response fundraising at the National Cystic Fibrosis Foundation, where he started his career and created the organization’s first national direct response program. Fox is an industry thought-leader, frequent speaker at industry conferences and an active participant in the DMA nonprofit federation. He graduated from Virginia Commonwealth University in Richmond, Va.