Last year was tough, but many nonprofits received an unexpected gift when it came to year-end fundraising — increased giving. It was almost a silver lining to the difficult year that cancelled so many fundraising events, resulted in reduced staff and services, and made mission goals almost impossible to hit.

While there have been some glimmers of hope in 2021, the uncertainty that became a theme last year still lingers. Will the return of in-person events and new opportunities for hybrid events bring a return to pre-pandemic event fundraising? Will finding talent ever get easier? Will supporters continue their generous streak or will their charitable spirit fade as their lives return to normal? 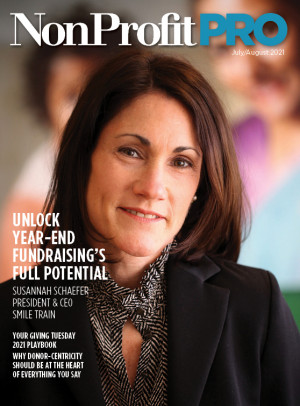 For New York City-based Smile Train, the largest cleft organization in the world, its year-end efforts last year presented challenges, yet valuable lessons learned that it will utilize as it moves forward. The organization has been providing free surgery and comprehensive cleft care, as well as the training and resources for medical professionals to complete that work, since 1999. Its impact is 1.5 million people and counting, but the COVID-19 pandemic halted its work around the world. The charity soon found its voice urging supporters that its work is still needed since 39,000 surgeries were put on hold during the pandemic. While it has resumed fulfilling its mission worldwide, capitalizing on last year’s fundraising success is still vital.

Susannah Schaefer, The nonprofit’s president and CEO, cited her organization’s usual year-end efforts at about 30% of its annual fundraising, but last year, that number reached 38%. More than a third of its fundraising came in the final three months of the year. So, retaining that captive pandemic audience will be the key for many nonprofits as they determine how to approach year-end giving in 2021.

Year-end giving doesn’t need to be a rush to the finish line in the last month of the year. Many see Giving Tuesday as the kickoff, but think of that more as the start of the final lap. The race really starts at the beginning of the fourth quarter, so your preparation should be already underway.

For Smile Train, World Smile Day conveniently falls in October, so serves as the nonprofit’s year-end kickoff, which flows right into Giving Tuesday and the final month of the year. Previously, its in-person events for World Smile Day and Giving Tuesday jumped from city to city each year in locales, such as Chicago, Los Angeles or Miami. However, Smile Train shifted to a star-studded lineup for its inaugural virtual event in 2020. The virtual gala, which singer/songwriter Ciara emceed, featured appearances from Gabrielle Union-Wade, Christie Brinkley, Kevin Smith and others; a performance from Elle King; and a text-to-give campaign that helped the event surpass the $54,000 goal for its #540Today campaign, which represents the 540 babies born with clefts each day.

“We had accessibility to our celebrity supporters who could send in a video message of encouragement for our programs for cleft lip and palate, to support our patients and beneficiaries and help spread the word about Smile Train in our work,” Schaefer said. “And so it was just a neat way to patch together this really fun event that focused on cleft lip and palate, our global work, how it’s transformative and how we’re supporting our patients. And our patients are going on to thrive and live a full and healthy life.”

With safety top of mind, World Smile Day will be highlighted with a virtual campaign on Oct. 1, but it is too early to share the details since they are still in the works.

“World Smile Day is a happy day for Smile Train,” she said. “We get very excited about it. It connects us to our partners and our patients and our global team because everybody gets involved in it. Our work is global, as you know. And so we’re looking for universal ways to speak to our work and make sure that it translates in all the countries where we work. ... Anyone from our medical partners down to our donors, to our supporters, to the cleft community, [they] can all get behind a campaign and embrace it, and just help us speak to our work. So it’s a celebratory day for us, and it’s an awareness-generating day for us.”

And awareness is part of the battle for Smile Train, as cleft lip and palates are often misunderstood in countries where health care access is available and insurance tends to cover the medical condition that can affect an individual’s ability to breathe, eat and speak.

“And so our goal is to raise awareness, so that we can raise the funding, so we can support and empower our partners for treatment in their own countries,” she said.

Each day, 540 babies are born with cleft lips and palates. Smile Train aims to raise awareness, train medical professionals and provide medical access for this condition to those who need it most around the world. Credit: Smile Train

Giving Tuesday is also a large part of that. Though the U.S. remains the most engaged country with the day of giving, the charitable holiday is gaining traction around the world with 75 countries now participating in the nine-year tradition, according to GivingTuesday.org.

“Globally, philanthropy is definitely getting a lot of awareness,” she said. “And I think also with the captive audience that COVID has brought us, [Giving Tuesday] has definitely given more awareness to nonprofits overall.”

We know traditional fundraising methods still get the job done, but paper shortages and U.S. Postal Service delays contribute additional variables to consider, making digital appeals just as important. A study from M+R found that nonprofits continue to send an average of 12 email appeals as part of an end-of-year campaign — not including Giving Tuesday or non-appeal emails. Nonprofits attributed 26% of their revenue to email, but text-to-give may be worth the effort, too. While M+R didn’t have enough data collected on SMS to provide median data, it shared three very revealing case studies:

Email, direct mail, DRTV, events, social media, Giving Tuesday — they all need to be in the mix for year-end campaigns. Smile Train’s direct mail campaigns are always geared toward its year-end campaign in November and December. But since year-end appeals are competing against so many other strong charitable causes that supporters’ see in inboxes, in mailboxes and on television, it becomes difficult not to blend in, especially on Giving Tuesday.

“You want to come up with an innovative approach to make sure that your voice is heard throughout it, and you stand out in that crowded space,” Schaefer said. “There are a lot of nonprofits out there and most are focused on that day in particular because it’s almost become like a fundraising day in a sense, which is great. I think it’s a wonderful thing to see the rallying behind it.”

Learn From the Past

As much as everyone may want to forget 2020, there may be some valuable lessons buried under all the face masks and hand sanitizer we stocked up on. After all, we found ways to connect even when we couldn’t be together, and donation statistics may suggest we became more generous and caring of others.

If 2020 numbers are any indication (but realistically we’ll have to wait and see if these numbers stay or return to pre-pandemic figures), charitable contributions may be up. While average gifts fell $18, overall revenue climbed almost $20,000, according to M+R, which looked at year-over-year for November and December combined (to include Giving Tuesday regardless of in which month it fell). That shows a median 35% increase in revenue and 38% jump in the number of gifts. However, it’s important to note that not all nonprofits shared the same success with average gifts ranging from a decrease of 66% to up more than 100%. It’s understandable to be skeptical of the future, but it’s important to find the best way to move forward. For Smile Train, that meant not pulling back.

“And we’ve realized that it was important for us to stay the course, continue investing at the same level,” Schaefer said. “You have to pivot obviously because you have investments that were planned and budgeted for that could have been in-person events, fundraising events. And we had to pivot and take those — what would have been an in-person event — and make them hybrid or make them fully virtual. We had to do this as I think all nonprofits had to do, but the main point was staying the course and keeping the investment levels where they were.

She acknowledged fees related to in-person events, like catering, were non-existent, therefore, the nonprofit was able to decrease investment and increase revenue — though Smile Train also saw higher fundraising levels with virtual events. But keeping her organization’s activity at the same level was critical.

“It was very important for us to remain relevant through it and, for us as an organization, we did not see a dip in our revenue through the pandemic,” she said. “We actually fared very well. And, all of those campaigns, the individual giving campaigns, did perform very well throughout.”

Individual giving remains a dominant source of giving, accounting for 69% of giving, or $324 million, according to CSS Fundraising’s “Snapshot of Today’s Philanthropic Landscape.”

If, like Smile Train, your nonprofit had a good year in 2020, think how you can capitalize on that year’s fundraising with the addition of in-person events or by hosting hybrid events to create the best of both worlds — and the most opportunities for individual giving.

“I think we’re all going to be looking at a new future of combinations of these hybrid-type of functions,” Schaefer said. “Here we are connected via Zoom right now. Zoom has brought this opportunity to be connected and be connected in ways where, in the past, if you were going to miss a conference or an event, you were going to miss a conference or event. Whereas now with Zoom, you can balance things in a new way, which is a pivot. It’s a change, but it brings opportunity. And so you have to be able to work through those. ... And so you have to seize the moment, and seize the opportunity.”

“Well, it turned out to be bigger than we ever expected it to be, because we took what would have been probably ... an in-person event in New York City or in LA — you’re looking at something that’s just an in-person event with that many people. And we took something, and made it global and virtual, and that’s where this is a real learning lesson, I think, for all nonprofits.”

Supercharge Your Campaign With Challenge Gifts

To Build or Not to Build? Is a Capital Campaign Right for Your Nonprofit?