That's the sad state of affairs at an Oxfam International thrift shop in Swansea, South Wales. According to The Mirror, the shop has received so many copies of the book that it no longer has room for them all on-premises. The shop has resorted to shipping the novels off to Goldstone Books, an independent warehouse that collects unwanted or overstock books, sells them on Amazon or eBay and recycles what it can't sell.

How many copies of "Fifty Shades of Grey" is too many? Well, when we said enough to build a fort, we weren't exaggerating. Via BBC TV's QI Twitter feed: 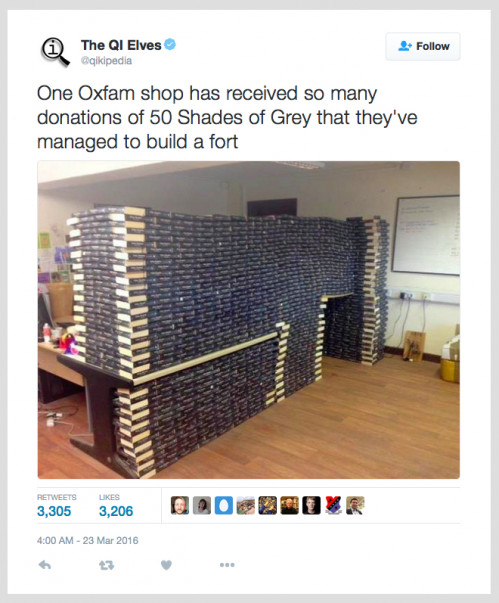 The Oxfam shop, naturally, doesn't want any more "Fifty Shades of Grey." So it took to Facebook in a last-ditch attempt to stem the tide.

"We appreciate all your donations—but less 'Fifty Shades' and more '60s and '70s vinyl would be good," it posted Sunday, adding a smiley-face emoji for good measure.

"There are a lot of people obsessed by 'Fifty Shades of Grey.' We get people bringing in new copies, coming in all the time," he told The Mirror. "Enough is enough."

These are the words of a truly desperate man. And these are desperate times. For Phil's sake, the "Fifty Shades" scourge must be stopped.

Decoration Diaries: How One Distributor Set Up a N

Are Incentives Bad for Peer-to-Peer Fundraising?

Incentives Are Bad, But Promotional Products Are Not