Are Incentives Bad for Peer-to-Peer Fundraising?

Let’s face it: There are a number of ways that you can reward and recognize your volunteer fundraisers—specifically when it comes to a peer-to-peer fundraising strategy. And for these fundraisers to be truly successful, they have to really believe in the organization’s mission and cause, or else why would they be volunteering? While doing something in the name of social good can be a motivating factor for fundraisers to raise as many dollars as they can, feeling like you are a part of that organization’s community—and feeling truly appreciated by the organization—can boost up that motivation level by two-fold.

My question for you is this: Are incentives bad for fundraising? This is an ongoing debate in the nonprofit space, and the answer to this perplexing question is: It depends.

What Is Peer-to-Peer Fundraising?

In this form of nonprofit fundraising, volunteer fundraisers are raising dollars on behalf of the nonprofit organization. What that means is that nonprofits host peer-to-peer events—such as the Color Run or Barbell for Boobs—and people volunteer to be fundraisers for these events. Peer-to-peer is a valuable fundraising strategy for nonprofits, because it gives your volunteers the chance to be at the forefront of your organization. And volunteers are one of your most valuable assets, because they are passionate about your organization’s mission and what it stands for. These volunteers will engage donors, build strong relationships with them and get them to be more than just one-time donors.

Peer-to-peer fundraising can be seen as an additional revenue stream for nonprofits, and the success of these efforts is heavily reliant on the social relationships—or non-transactional relationships—that nonprofits hold with its volunteers (and donors).

How Are Volunteers Rewarded for Their Fundraising Efforts? 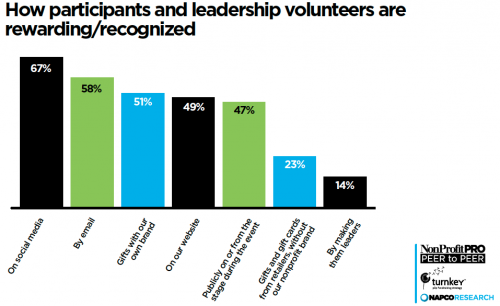 In the study, we speculated that, because the majority of nonprofits are rewarding their fundraisers through recognition through social media and email, these nonprofits are missing an opportunity to reward their fundraisers with tangible gifts that may have a lasting impact on the receiving fundraiser. The important thing to remember when it comes to “incentives” is that if you are rewarding your fundraiser with a tangible gift, make sure that it is a low-value gift.

Here’s what Otis Fulton, Human Behavior Expert of Turnkey, had to say about it: “A low-value gift reinforces [fundraisers’] attachment to the organization every time they see the item with the logo. A high-value gift would suggest something different. A simple rule of thumb: Would you thank a friend or family member for helping you clean out your garage by giving them a $50 gift card? Of course not, you have a social relationship with your friends; they would think that’s strange.”

What Are the Top Rewarding Fundraising Behaviors?

The study also pulled data about behaviors that fundraisers are being rewarded for. The top three behaviors were fundraising level (75 percent), fundraising success (57 percent) and serving in a volunteer leadership role (43 percent). These behaviors are all factors that are associated with the volunteer’s fundraising outcome, so they are behavioral metrics that are easiest to measure. Other metrics such as recruiting others, fundraising early, etc. were harder to measure. 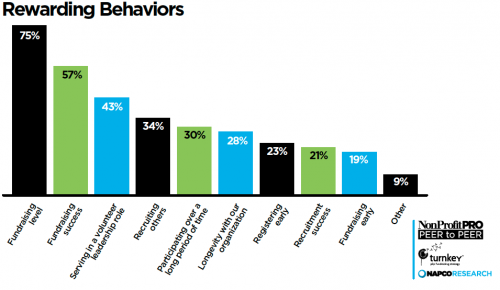 By rewarding volunteer fundraisers based on their fundraising activity, it can motivate them to raise more dollars for the organization. And by recognizing their service, it reinforces their attachment to the organization. Nonprofits should take note of this when launching a peer-to-peer fundraising effort. It’s also important to note that low-value gifts and digital recognition are often used because they are the most easily managed forms of rewarding mechanisms.

The Power of Executive Communications for Nonprofits

The Case for Ending Giving Tuesday