U.S. PIRG, a public interest group comprising about 400 state nonprofits across the U.S., called the new rule "unrealistic" and said it would have "significant negative consequences for nonprofit, cause-oriented organizations." Chief among the federation's complaints was that the rule, which essentially doubles the salary threshold for overtime eligibility, would make staffing difficult for nonprofits.

"Organizations like ours rely on small donations from individuals to pay the bills. We can’t expect those individuals to double the amount they donate," Andre Delattre, executive director of U.S. PIRG, said in a statement. "Rather, to cover higher staffing costs forced upon us under the rule, we will be forced to hire fewer staff and limit the hours those staff can work—all while the well-funded special interests that we're up against will simply spend more."

That complaint is similar to those already raised by the for-profit sector, but U.S. PIRG noted another concern unique to nonprofits. Via its website:

The logic of the rule, as applied to nonprofit, cause-oriented organizations, makes no sense. A person of means—in service of a cause to which they feel deeply committed—can volunteer to work for our organization for free for as many hours as they wish, but a person of lesser means, who is no less committed to the work we do, cannot agree to work for our organization for less than $47,476 without having their work hours strictly limited in order to keep our costs affordable. This raises First Amendment concerns.

It's an unusual stance for an organization that, by and large, leans firmly to the left. On its Facebook page, the organization has recently posted links to articles decrying super PACs, challenging voter-registration laws and calling for better food labeling, among other issues. It lists "consumer protection" and "democracy for the people" as two of its top priorities. And it bills itself as a "consumer group that stands up to powerful special interests on behalf of the American public, working to win concrete results for our health and our well-being.”

Opposing a rule designed specifically to protect working class Americans from exploitation by their employers seems to run counter to U.S. PIRG's mission statement. (Isn't that what the overtime rule is intended to do—benefit public health and well-being?) And that irony hasn't been lost on the organization's followers, many of whom called out the group on social media: 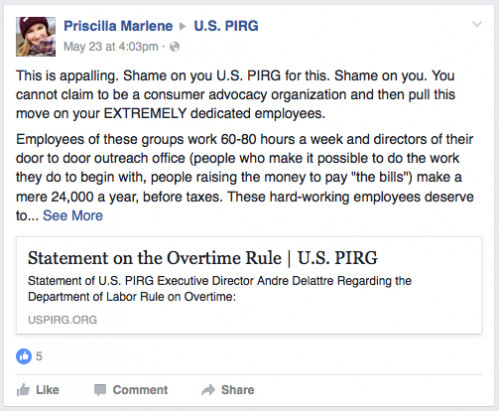 Despite daily posting activity—and perhaps because it expected public backlash—it does not appear that U.S. PIRG shared its statement opposing the overtime rules on any of its social media channels. Yet many of its Facebook comment threads for unrelated posts were taken over by users posting sentiments similar to the above. One user posted the entirety of the statement in the comments on multiple articles and called for Delattre to rescind it.

The organization has not yet responded to the social media criticism.

Still, U.S. PIRG's concerns echo those of many other nonprofits. Delattre told The Huffington Post that the organization supports "the intent of the rule," but argued that, by making it harder for nonprofits and advocacy organizations to fulfill their missions, the rule ultimately hurts already vulnerable demographics more than it helps.

"I think most people understand that there is a difference between the people this rule is trying to protect and other people who are doing work that they’re choosing to do,” Delattre told the news site.