Millions of Salaried Employees Eligible for Overtime Starting in December 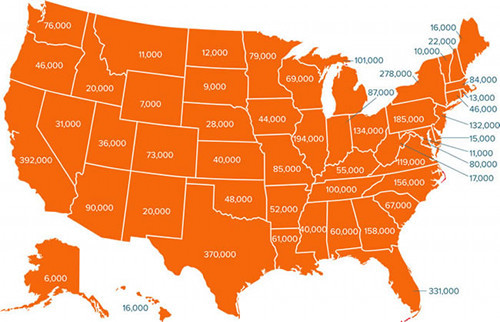 This map shows an estimated number of workers impacted by the new overtime rule in each state. Image via Department of Labor

"There's an awful lot of free hours employers pick up instead of workers earning more pay or spending time with their families or going back to school," Biden said at the announcement at Jeni's Splendid Ice Creams in Columbus, Ohio.

The new rule is expected to affect 4.2 million Americans who were not previously covered by the $23,660 threshold for overtime pay and host wages by $12 billion over the next decade, with an average annual increase of $1.2 million.

Of those affected, about 55.6 percent are women, 31.3 percent are ages 25 to 34, and 39.2 percent have attained a bachelor's degree while another 28.6 percent have completed some college, according to statistics from the White House.

“The overtime rule is about making sure middle-class jobs pay middle-class wages,” U.S. Secretary of Labor Tom Perez told reporters Tuesday, according to The Huffington Post. “Some will see more money in their pockets … Some will get more time with their family … and everybody will receive clarity on where they stand, so that they can stand up for their rights.”

However, Republicans aren't as thrilled about the change, which does not need congressional approval, as Speaker of the House Paul Ryan vowed to fight the rule.

"This regulation hurts the very people it alleges to help," he said in a statement. "Who is hurt most? Students, nonprofit employees and people starting a new career. By mandating overtime pay at a much higher salary threshold, many small businesses and nonprofits will simply be unable to afford skilled workers and be forced to eliminate salaried positions, complete with benefits, altogether."

The Fair Labor Standards Act (FLSA) of 1938 created overtime protections for hours worked past 40 each week, according to a press release from the White House. Since the 1970s, the nation's overtime rules only had one comprehensive update. In 1975, 62 percent of full-time workers were eligible for overtime based on their salaries, but today, only 7 percent are eligible, so, in 2014, Obama tasked the Department of Labor with modernizing the overtime rules.

While hourly workers have been guaranteed time and a half for time worked beyond a traditional 40-hour week, salaried workers have been guaranteed the same only if they earn less than the Department of Labor's salary threshold and perform primarily executive, administrative or professional duties. Some occupations, such as teachers, doctors and lawyers, are not eligible for overtime or are subject to other provisions.

The new threshold, originally expected to reach $50,440, factored in regional variations and landed within the 40th percentile of full-time salaried workers in the lowest income Census region, which is currently the South. The salary threshold also will increase every three years, starting Jan. 1, 2020 when it is expected to reach $51,000.

The Department of Labor released information and guidance on the new rule specifically for nonprofits. To be covered by the FLSA, an organization could be covered on an enterprise basis ($500,000 in revenue-producing activities annually) or individual basis (employee's involvement in interstate activity, such as making out-of-state phone calls, sending interstate mail or email, or ordering or receiving goods from out-of-state suppliers). However, regardless of income, the act applies to hospitals, businesses providing medical or nursing care for residents, government agencies, and schools.

The guidance also posed multiple scenarios for how nonprofits can become compliant with the new rule, along with examples specific to nonprofits. Here are five choices nonprofits can make to ensure employees' earnings are in compliance with the FLSA new rule.

1. An employee earns below the threshold and only works 40 hours a week.

2. An employee receives a raise to push his or her salary to or above the threshold.

3. An employee receives overtime pay for hours beyond a 40-hour workweek.

Alexa, a development manager for a cultural institution, earns a fixed salary of $41,600 per year ($800 per week) for a 40-hour workweek. Because her salary is for 40 hours per week, Alexa’s regular rate is $20 per hour. If Alexa works 45 hours one particular week, the employer would pay time and one-half (overtime premium) for five hours at a rate of $30 per hour. Thus, for that week, Alexa should be paid $950, consisting of her $800 per week salary and $150 overtime compensation.

4. The nonprofit reorganizes workloads, adjusts schedules or spreads work among current staff or new hires to keep an employee to a 40-hour week.

John, a manager at a charity consignment shop (subject to FLSA coverage) who satisfies the duties test, currently begins work at 8 a.m. Monday to Friday. Under the final rule’s new salary level, he would be newly entitled to overtime compensation. Among other duties, John accepts donations to the shop from donors, and the busiest time for drop-offs is always between 4 p.m. and 6 p.m., so John routinely works until 6:30 p.m. The shop may wish to adjust John's schedule such that he doesn't need to begin work until 10 a.m., thus limiting the number of overtime hours he works.

5. The nonprofit reduces the employee's hourly wage—as long as it doesn't fall below the highest of applicable federal, state and local minimum wages—and pays overtime.

Assume a fundraising supervisor at a nonprofit who satisfies the duties test for the executive exemption earns $37,000 per year ($711.54 per week). The supervisor regularly works 45 hours per week. The employer may choose to instead pay the employee an hourly rate of $15 and pay time and one-half for the five overtime hours worked each week.

"Nonprofit organizations may already have systems in place for tracking non-exempt employees’ hours," according to the Department of Labor. "These existing systems can be used for newly overtime-protected employees impacted by the overtime rule. As long as they are complete and accurate, employers may use any method they choose for recording hours."

American Express Pilot to Round Up Purchases

Be Cautious When You Transition to a Different Sustainer Processor