Roughly three in five Americans tend to trust nonprofits; however, 43% have lost trust in a nonprofit, with many unwilling to forgive, according to a recent report, “Most Trusted Brands 2022: Trust in Nonprofits.”

While putting donations to good use was the top way nonprofits gained the trust of those surveyed, misusing funds was the most frequent reason for losing Americans’ trust, thus requiring nonprofits to consistently deliver on what they promise. Only 8% of those who lost trust in a nonprofit continued to give to that organization. Those who lost trust in an organization typically gave elsewhere (43%), stopped giving permanently (38%) or stopped giving at the time but remained open to giving to that organization in the future (18%). 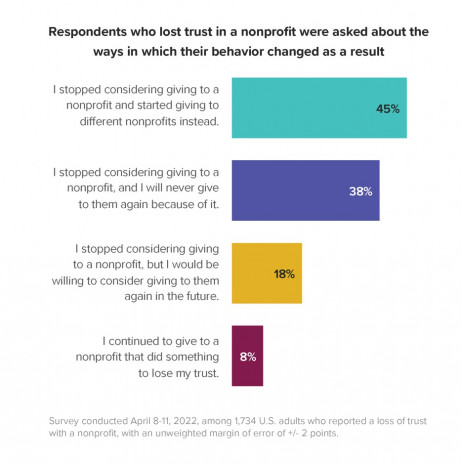 "It is an honor to be recognized among so many well-regarded nonprofits in the first year of Morning Consult's Most Trusted Nonprofit Brands,” Richard C. Shadyac Jr., president and CEO of ALSAC, St. Jude’s fundraising and awareness organization, said in a statement. "This report reminds us that trust, particularly for nonprofits, is earned and is paramount."

Though St. Jude currently holds the top spot, the study noted that the No 2. most trusted nonprofit could move to the No. 1 spot in the future since it ranks higher among Gen Z adults, millennials and among adults in higher-income households that earn $100,000 or more annually.

Nonprofits face a challenge among those belonging to Gen Z, according to the report. Not only are its members less aware of nonprofit brands, but they were more skeptical of all 50 nonprofits that were tested. However, both the American Civil Liberties Union and Equal Justice Initiative tested higher among Gen Z members than the general public.

“However, there are real glimmers of hope regarding this younger generation,” according to the report. “While they seem to latch less onto individual brands, their plans to give to a nonprofit are in line with or higher than those of other generations. This makes capturing the attention of Gen Zers and getting them to remember your brand that much more important.”