Messaging: Why Consistency Is Everything

A Messaging  Success Story
Maly-Rodgers would know. In her time with the St. Louis Children’s Hospital Foundation, she’s seen firsthand what it takes to achieve and maintain consistent messaging—and the challenges in doing so across multiple channels. “We know it’s a need, but found it difficult to manage,” she said of multichannel marketing. “One of the things that has helped us manage the consistency of our messaging has been partnering with Almanac.”

Historically, the foundation’s marketing campaigns centered on actual, individual patients or families, an  approach designed to resonate with donors on an emotional level and build a personal connection between audience and organization. Normally, this is a smart approach, but the foundation was having trouble putting it together. It was featuring multiple children per year in its campaigns, but its marketing materials were all over the map. “The look wouldn’t have any similarities, and the message was definitely different with each piece,” Maly-Rodgers said.

A sampling of the coordinating marketing materials used in the St. Louis Children's Hospital Foundation's "Secret Guide to Children's" campaign.

The foundation recognized that it needed to  narrow its approach, and after consulting with  Almanac, found the perfect focal point—a teenaged patient named Josh who’d spent almost 60 days at the hospital. “When we started working with Stacy and the St. Louis Children’s Hospital Foundation, they had discovered that their direct mail donors  really responded to following one patient throughout the year,” Winschel explained. “They had a former patient who was very articulate and was willing to be the subject of the campaign. So we  began by meeting with the foundation and working  to understand what they stood for. What was the difference that the foundation made in the experience of the patients? If the foundation wasn’t there raising funds, how would the experience be different for the patients? We worked to understand  everything the foundation funded and also took into  account the hospital’s points of differentiation,  and those two things combined to become our key messages for the campaign.”

From there, Almanac, Maly-Rodgers and the team met with Josh and began gathering material for the campaign. Initially, this meant questions about how programs and services funded by the foundation impacted his stay and recovery, but soon, largely due to Josh’s engaging personality, the campaign took on a life of its own. Josh shared “insider” information on the  hospital—finding which nurse’s desks had the best candy, using syringes for water fights with custodians, shaving minutes off total therapy time with proper pre-therapy bed-height adjustments, etc.

“His insider tips became ‘Josh’s Secret Guide to Children’s,’” said Winschel. “Over time, we realized that the foundation was really the ‘Secret Guide,’ providing the extras and support that made the hospital less ‘hospital-y,’ as Josh would say, for kids.”

The team took Josh’s tips and developed them into a multichannel campaign—“Secret Guide to Children’s”—consisting of six mailings, a year-end piece, an email and a dedicated Facebook page. Direct mail pieces were coordinated with Facebook postings to help tell the story in multiple places, and the same stylized graphics used in the mailings were repurposed for Facebook. The messaging in each piece was an actual tip from Josh in his own voice—“Syringes shoot water the best. (And the janitors love it!)”—and the year-end email ask was addressed from Josh himself. All told, it was a huge success. Donor engagement was off the charts, and the campaign won a 2014 Gold Award for Fundraising Excellence. 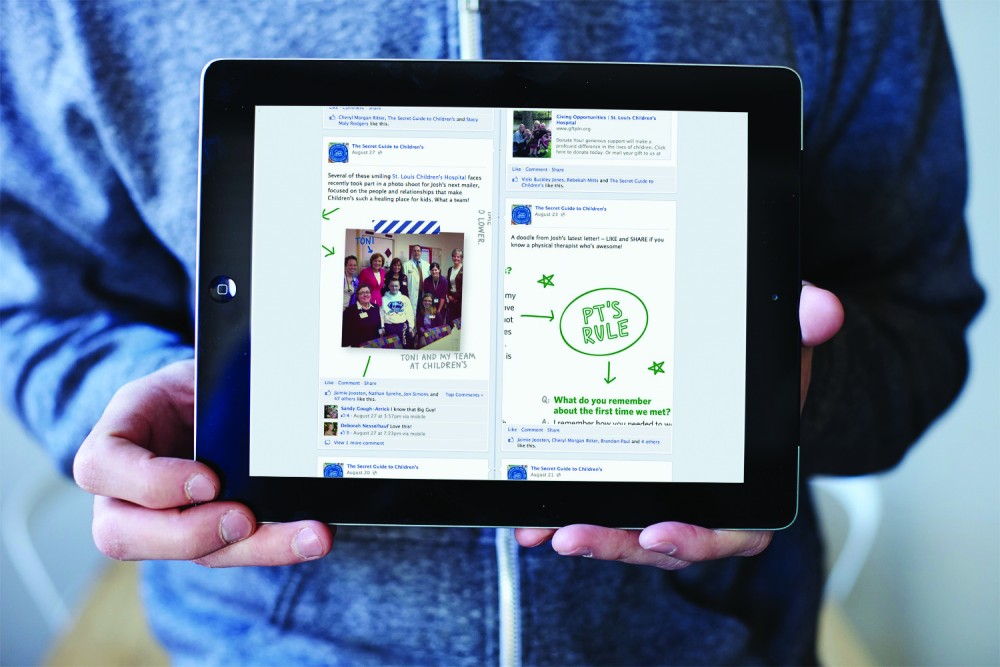 “The one piece that I feel brought everything together was the logo,” said Maly-Rodgers. “After interviewing Josh and his mom with Almanac, there was so much material that we could cover, and the logo was just the beginning. As Josh spoke to us, things just evolved. His story and how it was portrayed was really the beginning of the way in which we have focused on all other direct mail campaigns moving forward—easily finding the cohesion and smooth transition from one patient story to the next.“

“Stacy has told us that she would get notes addressed to Josh with donations all the time,” added Winschel. “People felt like they had a relationship with him. They wished him all the best, and through him, they connected to the foundation. The consistent messaging and voice played a major role in that.”

Getting It Right
The St. Louis Children’s Hospital Foundation campaign shows how powerful consistent messaging across multiple channels can be. But it also shows the dedication and resources necessary to pull it off. The “Secret Guide to Children’s” campaign was laser-focused thanks to its star, Josh, but that level of coordination isn’t always easy to achieve—especially for smaller nonprofits with limited staff and without the budget to work with a top-flight agency.

“The main challenge with managing multiple channels is the additional staff time required,” said Carrie Ellis, vice president of marketing and product management for Reeher, a St. Paul, Minnesota-based software services developer that works to improve higher-education fundraising efforts. “Sometimes there is a tendency to align staff by channel, but in my opinion, this type of siloed activity should be avoided, as planning messaging and campaigns across channels helps ensure the consistency you are striving  to achieve.”

And then there are the channels themselves. By nature, every channel is different, and as such requires a different approach. It’s a juggling act, only instead of three bean bags, you’re juggling a bean bag, a chainsaw and a flaming torch—together, they make for quite a show, but you can’t handle them all the same way. “Facebook posts lend themselves to a more informal tone. Tweets are by definition limited in length. Email subject lines can’t be too long and must be eye-catching enough to drive opens,” said Ellis. “With the different challenges represented by different media, creating top-level messages should be the first step. If these top-level messages are kept succinct and used as guides, it is much easier to keep coming back to those specific points as you roll out a communications plan across different channels.”

Donor demographics should also play a major role in your messaging, but maybe not in the way you’d expect. Ellis explained that while channel preferences do indeed vary across demographics, there’s not always a pronounced divide—in other words, just because your wealthiest donors respond well to direct mail, doesn’t mean they won’t see or respond to other channels. “Be aware of preconceptions that could influence your choice of channels,” Ellis said. “For example, among the appeals we  analyzed, we found that donors used direct mail, email, web or phone to make a charitable gift to their institution, regardless of their net worth bracket.

“Also, the data showed that digital channels like web and email should not just be viewed as channels relevant solely for younger donors,” she continued. “Online giving has reached broad acceptance for donors of all ages. When we reviewed the breakdown of channel performance by age of donor, members of each age group gave gifts via each of those digital channels in addition to phone and direct mail.”

And that’s perhaps the biggest key to messaging success: knowing your audience. If you don’t know anything about your donors or potential donors, it’s near impossible to give them what they want— regardless of how focused your messaging is. “Overall, one of the most important steps you can do when implementing a multichannel, integrated campaign is to step for a moment into the persona of your target recipient,” said Ellis. “How would you react if you read each of the messages in sequence, or simultaneously? Do they make sense? Are they conflicting? And, first and foremost, do you know what action you are being asked to take?”

Sean Norris is editor-in-chief for Promo Marketing. Reach him at snorris@napco.com.

What to Use When: Letters, Postcards and More