For even the most informed among us, the word “leprosy” can conjure up images of Biblical times, when sufferers were deemed unclean, ostracized and left to fend for themselves without aid or community.

Sadly, that mental picture is inaccurate only in its historical setting. Despite this reality, leprosy remains a forgotten disease; very few people realize it continues to persist in some of the most forgotten corners of the world. The World Health Organization estimates that nearly 200,000 people are diagnosed with leprosy annually, and today the disease threatens millions of the poorest and most marginalized people.

Since 1954, nonprofit and medical aid organizations have celebrated World Leprosy Day during the last week of January, a nod to the day Mahatma Gandhi, a staunch advocate for leprosy patients, died. Our organization, American Leprosy Missions, is one of the oldest nonprofit organizations focused specifically on ending leprosy and other neglected tropical diseases, and we look forward to these dates to bring awareness and understanding to this global health problem. That same week, the community will recognize World Neglected Tropical Diseases Day for the first time; its aim is to bring awareness to 20 neglected tropical diseases (NTDs), leprosy among them. 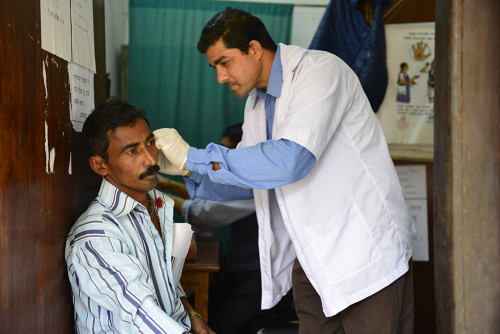 This mildly infectious bacterial disease can lead to permanent disability and lifelong health struggles, and its name carries negative and insulting connotations worldwide, but leprosy’s cure is quite simple. A multidrug antibiotic cocktail kills the bacteria, halts nerve damage and allows patients to avoid contagion after just a week. The key is early detection. Unfortunately, quality medical care can be difficult to access where leprosy is prevalent.

More than half of new cases are in India, though 143 countries of all sizes report some number of patients. Lack of treatment can lead to deformity, crippling and blindness, among other life-altering effects. Worldwide, the risk for NTDs is one in five; those most at risk are among the poorest on earth, with women and girls even more likely than their peers to contract one.

Perhaps the most devastating aspect of leprosy for patients and their families, however, is the social isolation and near-banishment some experience. Shame and separation add insult to injury interfering with patients’ ability to find safe housing, earn a living, obtain medical care or build stable lives in their communities.

This year, as World Leprosy Day and World NTD Day approach, those who work in this field hope to raise attention, incite action and inspire continued investment in the innovative research pushing forward a possible leprosy vaccine. American Leprosy Missions and its partners have developed a vaccine that we hope will prevent leprosy and bring an end to the devastating effects that it has on individuals and their families. We are excitedly looking toward the coming year and new clinicals trials for the vaccine that will soon begin in Brazil.

This month gives us all a chance to celebrate progress, including the dozens of countries that have eliminated NTDs, and emphasize the need to continue working with alliances, like the Global Partnership for Zero Leprosy, until the same is true worldwide.

The benefits of doing so reach farther than the initial victory of knocking out another world illness; the quest to end leprosy is a social justice issue fueled by the desire for every human to live fruitful, healthy lives without the stigma and isolation of this diagnosis.

It’s a thrill to know that the end is in sight for an ancient disease that still has a very real impact on our modern world. Until the number of new leprosy cases on Earth is zero, however, the tremendously harmful effects can only be countered by information, awareness and innovation.

Each day, nearly 50 children are diagnosed with leprosy. Without proactive treatment, they face life-changing disabilities and lifelong social isolation. World Leprosy Day endeavors to raise awareness for them to ensure that the citizens of the world have a clear picture of leprosy and what it means for their young lives. Instead of people suffering from a long-ago disease, they are fellow humans in modern times grappling with the effects of an illness we can bring to an end.

Leprosy jeopardizes the human rights of the world’s marginalized people, but eliminating it is within reach. Our hope is that, in the years ahead, there is no World Leprosy Day on our January calendars — because the disease itself is no more. Until then, the work continues.

Bill Simmons is the president & CEO of American Leprosy Missions, the nation’s oldest nonprofit organization working to bring an end to leprosy and other neglected tropical diseases that still plague many parts of the developing world.

It is estimated that more than four million people around the world are affected by leprosy. American Leprosy Missions invests in projects that bring sustainable, novel solutions and tools to people affected by leprosy and other neglected tropical diseases, including a cutting-edge vaccine research project that could bring an end to leprosy in our lifetime.

“Every two minutes, someone in the world is diagnosed with leprosy,” says Simmons. “And while the disease can be cured with a short-term drug regimen, many of those affected will become disabled before they have access to the cure. That gives me a sense of urgency every day.”

Every day, Bill and his team work to restore hope and dignity to people affected by leprosy and related diseases. Prior to joining American Leprosy Missions in 2010, Simmons served as President and CEO of two nationwide retail chains. His two decades of business experience serve him well as he leads American Leprosy Missions to bring care and a cure to those affected by leprosy and other neglected tropical diseases.

Simmons spent his teenage years in Democratic Republic of the Congo (then Zaire) with his missionary parents and developed a heart for those suffering from curable illnesses like leprosy after seeing first-hand the societal persecution that often accompanies these types of diseases.

Simmons is chair of the Global Partnership for Zero Leprosy, Vice President of the International Federation of Anti-Leprosy Associations (ILEP) board of directors, an advisory board member for the Nippon Foundation’s funding of the WHO Global Leprosy Program and a founding and executive member of the Leprosy Research Initiative.

He’s been featured in The New York Times, NonProfit PRO, and the Leprosy Review. He holds a degree in political science from the University of Tennessee. Simmons and his family live in Greenville, South Carolina.