Giving USA: Charitable Giving in 2021 Outpaced 2020 But Not Inflation

Charitable giving grew 4% over 2020 to $484.85 billion in current dollars, but when adjusted for inflation, dipped 0.7%, according to the Giving USA Foundation. Its longest-running and most comprehensive charitable giving report in America, “Giving USA 2022: The Annual Report on Philanthropy for the Year 2021,” was released this week.

“In 2021, Americans continued giving more generously than before the pandemic,” said Laura MacDonald, CFRE, chair of Giving USA Foundation and principal and founder of Benefactor Group. “However, the growth in giving did not keep pace with inflation, causing challenges for many nonprofits. In 2021, many donors returned to their favored causes, with many of the sectors that struggled in 2020 making a recovery in 2021.” 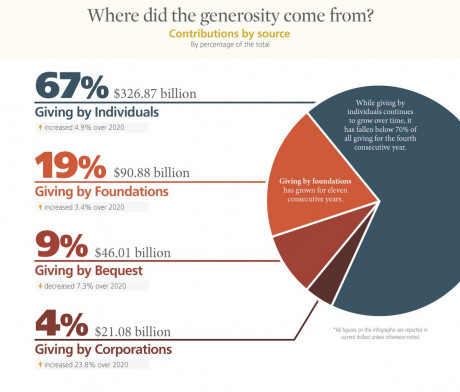 Here’s a look at the key findings, including sources of funding and a breakdown of funding among nonprofit subsectors.

While individual giving comprised 67% of total giving, remaining less than 70% overall for the fourth straight year, it reached its second highest total dollar amount once adjusted for inflation. Megagifts, defined as those $450 million or more, made up 5% or $15 billion of total gifts. Meanwhile, donors on average give about 1.8% of their disposable income, a percentage that has remained relatively stagnant (between 1.7% and 2.4%) since Giving USA began tracking it in 1981.

Bequests declined 7.3% (-11.4% when adjusted for inflation). However, that change is in comparison to a record year for planned giving. In 2020, there was $51.96 billion in bequests, including several extraordinarily large bequests. Despite the year-over-year decline, bequests reached their second-highest level — behind only 2020 — and made up 9% of total giving.

Corporations increased their share of giving to $21.08 billion — 23.8% of total giving (or 18.3% when adjusted for inflation) after a dip in giving in 2020. This category includes both corporate giving program contributions as well as grants and gifts made directly by corporate foundations.

For corporations, the percentage of pre-tax profits donated remains lower than how much individuals donate from their disposable income. That number, which peaked in 1986 at 2% and has declined in subsequent years, dropped slightly in 2021 to 0.7%

“In 2021, the U.S. had a strong year economically and also experienced inflationary pressures not seen in several decades,” Una Osili, Ph.D., associate dean for research and international programs at the Lilly Family School of Philanthropy, said in a statement. “While the stock market performed well in 2021, there were some economic factors that may have affected nonprofits’ operations, such as labor shortages, supply chain interruptions and ongoing high demand for services.”

“Several of the subsectors that struggled in 2020, such as giving to health and giving to arts, experienced a recovery in 2021,” said Josh Birkholz, vice chair of Giving USA Foundation and CEO of BWF. “Conversely, several subsectors that experienced strong growth in 2020, such as education and human services, did not fare as well in 2021. On the bright side, two-year growth for each of these subsectors was over 5%, even when adjusting for inflation.”