So, we are either getting worse at retaining people, or lower retention is happening to us because of systemic changes. And this could kill us in the long term. As an industry, we now have a 77 percent burn rate of new donors. We are taking more than three out of every four people who donate to us once and are flushing them away. That means, if we think we have a $15 cost to acquire a donor, we don’t actually. We have a $65.22 cost to acquire a new donor, because three out of four won’t do any donating beyond that first gift. When put like that, the metrics work for very few organizations.

The initial response is often to do what we have done before, but more. USPS and email metrics show we are mailing—electronic and snail—more and more. Communications increase in quantity and decrease in quality of results for each piece. 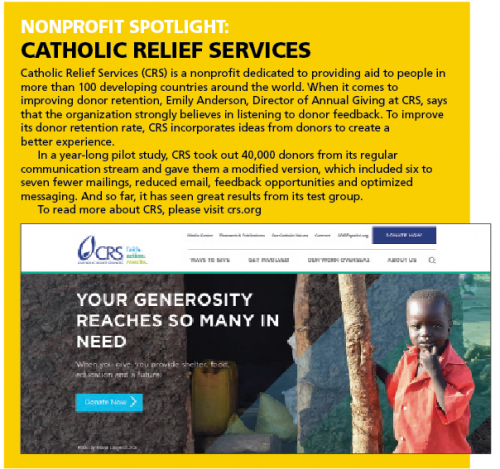 Unfortunately, this turns out to be more of a cause of attrition than a solution to it. In a DonorVoice analysis of over 20,000 comments made to nonprofits, about 20 percent of them were either “mail me less” or “don’t mail me at all.” And there’s the obvious point: If increased volume could have solved retention, it would have already done so.

It’s time to accept that the solutions and strategies that got us here may not be what will get us to our next “there.” Our fight against attrition needs to evolve (and we need to avoid self-inflicted wounds). As Seth Godin put it: “The opposite of ‘more’: It’s not ‘less.’ If we care enough, the opposite of more is better.”

This approach starts with the simplest of questions: Why do donors give? And why do they stop?

There are three core factors that go into these decisions:

• Who the donor is: Donor identity

• What the organization is: Commitment

• How the donor has been treated: Experience.

Fortunately, there are nonprofits that have led the way on each of these. Taken together, they give us a blueprint for fighting the battle on donor attrition.

A Case of Identity

All of us have many identities that we inhabit and move through in our daily lives. In a matter of an hour, you might move from worker to American, from child to Packers fan, from alumnus to amateur genealogist—all based on what situation you are in and what identities have been primed.

Even simple identity priming can help your fundraising. When telethon callers were told someone from their same community and of their same gender made a larger donation right before their call, they gave almost 25 percent more than when they were told that same person made a smaller donation or when the person who gave the larger gift wasn’t from their same community and/or gender. We want to keep up with the Joneses of our like identities.

Priming the identity of the donor can also help. The American Red Cross added, “Previous Gift: [Date],” to the top of its letter to lapsed donors. That one change increased response rate by 20 percent. Similarly, when it put in the city name into their annual fund campaign (e.g. Greendale Annual Fund vs. Annual Fund), response rates went from 4 percent to 5.5 percent.

That’s just with simple identities. But you also are likely to have different types of identities in your file who won’t respond as well to appeals compared to other identities. We had the pleasure of working with an animal-focused nonprofit. It had (not surprisingly) cat people and dog people who donated. When It asked whether they were a cat person or a dog person at the beginning of a telemarketing call and had that information played back to them later in the call (e.g. “As someone who loves cats, you should know that…”), donation rates went up 15 percent and its monthly donations increased by almost a dollar per month. Plus, that nonprofit then had its information to do likewise to all its communications.

The less obvious part is those two groups had entirely dissimilar reasons for giving. For those with a direct connection to the organization, 60 percent of their relationship came from wanting a deeper involvement with the nonprofit. They cared about the nurses who gave medical care at home and supported the families of their patients. Those with no connection to the organization were not interested in a deeper involvement and didn’t care about home nursing… at all. In fact, mentioning these two things as the impact they were having made them less likely to give.

It’s said that our donors are planting trees in shade, in which they will never sit. In reality, though, that’s only true of our shade donors. For them, we will tell them of picnics and sanctuary on hot summer days. There is also a segment of people who plant trees for the apples. We owe it to apple people to know they’re in it for the apples. We owe it to them to tell them about neither the tire swing nor the shade, if they don’t care. Our story to them will be the deep, moist flesh that children will pick from their tree and the juices that will stay on their cheeks until banished by a shirt sleeve. We will speak of shade-to-shade people and apples-to-
apples people.

And we will retain more donors for it. We need to: 1) know our donors and 2) show our donors that we know them.

The Power of Commitment

So, you know you have donors of a certain identity (or identities) and why they give. Within those groups, though, there will always people who love you and those who just aren’t that into you. That is where measuring commitment and determining what causes it makes the difference.

Take, for example, the recent success of the U.S. Olympic and Paralympic Foundation (USOPF). It surveyed its donors to find out both its level of commitment and its level of satisfaction with aspects of their relationship with the USOPF. It then combined this survey data, which isn’t usually captured in a CRM, with the behavioral data that is there. From this, USOPF could map out exactly why its best and most loyal donors were loyal, what it could do to improve and how much it stood to gain when it improved.

It turned out that the merchandise and premiums that constituted the bulk of communications and offers were relatively unimportant for USOPF’s most valuable donors. Key value points, like donors feeling like they were valued members of Team USA, were being neglected. The journey from a premium and merchandise-driven communication stream to one focused on how someone could be a part of the “Team Behind the Team” started with this insight. With this global change, it doubled both its response rate and its average gifts from its old program.

USOPF fought (and won) the attrition battle by knowing those it couldn’t afford to lose and finding more donors who shared this philanthropic passion.

If it hadn’t done this test and cut its welcome series for committed donors, it would have been paying for its pleasure of dissuading the donors who would have been its best and most profitable.

Amnesty Belgium also used commitment measures to great effect to improve its face-to-face six-month retention rates from 60 percent to 80 percent, cutting its burn rate in half. Face-to-face retention is notoriously challenging, leading to long payback periods for the investment to retain these donors.

Amnesty asked each donor how committed they were to the organization at the point of acquisition. From this, they could instantly prioritize the people who were with them no matter what and try to persuade those still on the fence.

With donor experiences, that is. The Rolling Stones were technically incorrect—you can get some satisfaction, but it requires you to measure your donors’ satisfaction with all of their experiences and fix the things that are broken both for that donor and globally.

1. High commitment, high satisfaction: This is what you love to have. Keep them and upgrade them.

2. Low commitment, low satisfaction: I’m
surprised you could sign these people up. They don’t particularly like you or the experience they had with you. These people are unlikely to be good long-term donors.

3. Low commitment, high satisfaction: They liked your canvasser, but don’t know that much about you. These are the “persuadables,” ready to hear your messaging and be convinced.

4. High commitment, low satisfaction: Red alert! These are people who love you, but didn’t have a great experience. Amnesty Belgium focused on these folks instantly, often with a phone call to see what went wrong. In this case, a $4 phone call can save a donor who cost $250 to $500 to acquire.

It found that people who complained, but had their complaints immediately resolved, retained better than people who enjoyed their initial experience. Therefore, it’s important to try to learn as much about donor experience as possible—you can change hearts and minds.

Also, looking at the data, it was also able to see how well its canvassers were doing. Traditional metrics looked at the number of sign-ups and average gifts, but the people who excelled on those metrics often created bad experiences (donors would say “yes” to get them out of the way) or signed up uncommitted donors. Those canvassers were put back into training or taken off of the account altogether. (This is also why the average canvasser and telemarketer generally hates satisfaction measures and why the top firms—and you—should love them.)

This measurement of experience is even easier in online formats. One nonprofit set up feedback measures on its website. At first, over half of all donors said the site was very difficult to use and almost no one said very easy. Looking over the comments, the nonprofit made some simple changes—adding PayPal as an option, reducing the length of its donation confirmation, eliminating some required fields, etc. In one month, its very difficult scores dropped from half to almost zero and its very easy scores went from almost zero to more than 70 percent.

And more importantly, its conversion rate went from 12 percent to 32 percent. Satisfaction with an experience matters.

It, too, could segment its donors by both commitment and satisfaction with automated emails thanking donors for their generous support, upselling them or working to fix an issue, depending on their responses.

This is the alternative to ever-declining retention rates and burning our donor rolls to a crisp. It’s not necessarily easy to do, but it is simple—starting with the very reasons that people give to us to start.

Editor's Note: This article appeared in the July/August issue of NonProfit PRO. Click here to view the entire issue.

Nick Ellinger joined the Moore, where he works to increase the automation and customization of fundraising as chief brand officer, in January 2020. Before that, he was DonorVoice’s vice president of marketing strategy, working with organizations like Catholic Relief Services, Share our Strength | No Kid Hungry, and the U.S. Olympic and Paralympic Foundation to look at their fundraising with a different lens. He developed his direct fundraising muscle running Mothers Against Drunk Driving’s direct marketing program for a decade. He’s also the author of "The New Nonprofit" to challenge fundraising norms.