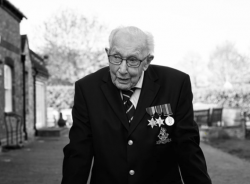 Just over three weeks ago, Captain Moore set out on a challenge on Blackbaud’s JustGiving platform: to walk 100 lengths of his back garden ahead of his birthday on April 30 and raise £1,000 for NHS Charities Together. Captain Moore not only completed his challenge and surpassed his goal by 6,314%, he has become a worldwide symbol of hope and inspiration in the face of the COVID-19 pandemic. His page on Blackbaud’s JustGiving has received donations from people in 83% of the world’s countries, making it the largest total raised by an individual on any online crowdfunding platform in history. At its peak, JustGiving transacted $57,600 per minute for NHS Charities Together with the average donation being $20.

“Captain Moore is a true hero — first as a veteran and now as the largest individual fundraiser online in history,” Mike Gianoni, president and CEO of Blackbaud, said. “And not just any fundraiser, a fundraiser to support frontline workers, health care heroes saving lives during COVID-19. We’re honored to have played a role in Captain Moore’s achievements by supporting his efforts with the reliable crowdfunding software needed to withstand this outpouring of generosity and global donations.”

Blackbaud donated £100,000 to NHS Charities Together in celebration of Captain Moore completing the 100-lap challenge.

JustGiving is the world’s leading online fundraising platform, known for its reliability and security. By making giving more simple, social and rewarding, JustGiving helps all causes, charities and people in need to reach more people and raise more money. JustGiving eliminated platform fees in March 2019 and moved to a voluntary contributions model. Over the past 20 years, JustGiving has helped more than 24 million individuals raise nearly $6.2 billion for causes that make a difference.

Editor's Note:  This press release was provided by a company unaffiliated with NonProfit PRO. The views expressed within do not directly reflect the thoughts or opinions of NonProfit PRO and its staff.