Anatomy of a Direct Mail Control: Friends of the Earth

Friends of the Earth is part of an international network of environmental groups. The U.S. group runs several campaigns to bring about healthy and sustainable change.

The decline of bee populations in the U.S. in recent years is the focus of this membership appeal. It's one of several direct mail campaigns focusing on the threats to bees. It’s been mailed since 2013, qualifying it as one of nearly 1,700 Grand Controls tracked by Who’s Mailing What!

The front envelope teaser is the first factor in the success of this campaign. “Bees are facing the worst die-off in 40 years …” it warns. “[A]nd they need YOUR help.”

The corner card carries the name of actor and activist Ed Begley, Jr., who signed the four-page letter inside. In that letter, he begins laying out a dire case, beginning in the Johnson Box.

He notes that the math—how much of the pollinator population that is responsible for our food—shows many species are nearing extinction. They’re the “canaries in the coal mine,” he says.

In the body of the letter, he names the villains responsible for the threat: Pesticides called neonics. Using bullet pointed and underlined copy, he describes some of the steps Friends of the Earth has taken to help the bees. He also mentions, for good measure, the other challenges the group is working on.

The reply form enrolls the new member. It also serves as an “Action Letter” that calls on the EPA administrator to ban the dangerous pesticides. 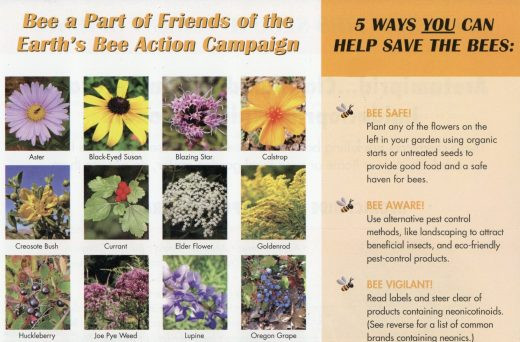 This direct mail control package also includes a two-sided sheet that tries to give the new member something else to do. It shows pictures of bee-friendly flowers that they can plant. The reverse side names common pesticides that include the bad chemicals.

The Takeaway
People need to feel that they can take steps to solve a problem besides donating money.

Is Your Philanthropic Support Going to the Dogs?