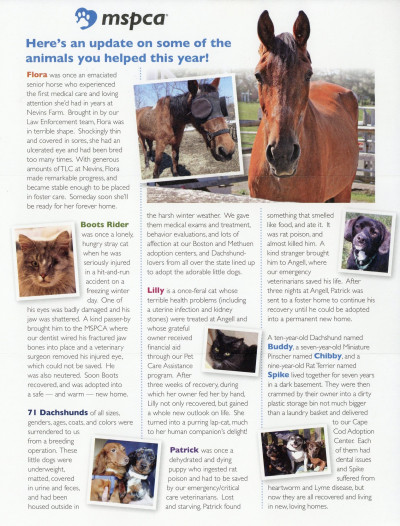 Why It Won
This package, although simple, accomplishes several tasks well. First, it makes the reader care. On the front of the #10 outer, a large black-and-white photograph of a dog in a decaying box is heartbreaking. It takes up almost half of the face of the envelope. The teaser acknowledges the contributor’s past support with an emphasis on “your.” Inside, the image is repeated on the letter, which asks for another gift because Massachusetts Society for the Prevention of Cruelty to Animals had not yet met its goals for the year.

Second, it thanks the donor for his or her support in saving animals, listing some by name. A one-sheet insert gives more of an update on specific dogs, cats and a horse that “you helped this year”—placing the emphasis on the donor. The response rate for this effort is a hard-to-beat 5.89 percent, and the packaged generated $243,965 in income. Bravo!

10 Things I Learned From 30 Years in Sustainer Giving, Part 1

The Secrets of Direct Mail for Nonprofits