Over Easter, I (Katrina) had an epiphany at church. Like almost always, my epiphany had nothing to do with the service and everything to do with letting my mind be quiet for a bit. Right after the Epistle Lesson No. 1, I thought about my failure in one particular area. Over the years, I have been often frustrated by my inability to take someone from the nonprofit world and turn that person into someone who can sell Turnkey’s services to nonprofits.

I have often watched what I would describe as a “stone-cold killer,” in terms of getting what they want in the nonprofit world and turning into a timid mess when I try to get them to take our services to nonprofit clients. Sitting in church last Sunday, the answer dawned on me—or at least part of it.

I rushed home to the still-in-bed Buddhist, Otis, to ask him about my hypothesis. He opened one eye after hearing my soliloquy, reflected on his knowledge of social psychology and said, “Yep, that’s it.” To help you understand when I tell you my hypothesis, we will talk about the “double bind” first.

The double bind refers to one of the challenges that women face in the workplace due to gender stereotypes. The topic has gained prominence in recent years, focusing on women in leadership roles, but it can likewise affect women on different levels of the corporate ladder.

The crux of the double bind is this: The behavior of women in the workplace is evaluated according to masculine standards. When women behave in a manner that is consistent with traditional gender stereotypes, they are considered to be weak. When they adopt a more assertive manner, they are considered to be unfeminine. This often leaves them with only bad options; hence the nature of the double bind.

Women are the minority gender in the corporate world still, though in absolute numbers there are many competent and highly successful women. As a percentage these competent, successful women are few, they are often judged harshly. Studies have shown that women in the workplace are held to a higher standard of performance than men. At the same time, women are (on average) compensated at a lower level for their performance than men. 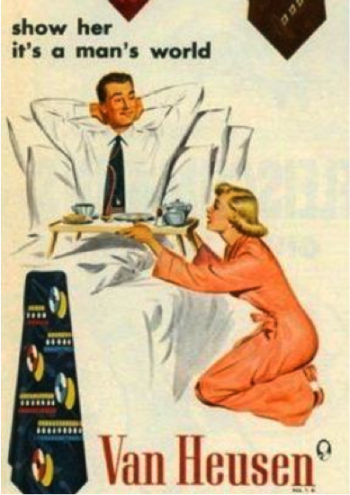 Women face the choice of being perceived as being competent or being liked. Pick one. Addressing the likeability issue in a 2007 debate, then Senator Barack Obama famously said to Hillary Clinton, “You’re likeable enough, Hillary.” Women who choose to behave in a more assertive manner are perceived as being less effective interpersonally than women who adopt a more traditional, “feminine” style of interaction. From IBM’s research on women in leadership, “Women are perceived as too soft or too tough, but never just right.”

So when women advocate for themselves, they experience a backlash. To avoid this, they hedge their assertiveness, compete less and thereby experience poorer results.

But happily, there is a work around. (Epiphany coming now!) If women advocate fiercely for someone else, there are no negative repercussions because it is perceived as an expression of maternal instinct. Research conducted at Georgetown University demonstrated that “in other-advocacy contexts, women achieve better outcomes as they do not expect (negative) evaluations or engage in hedging.” Women are freer to behave assertively on behalf of others, and they achieve greater success.

Back to my failure… What one attribute is common in all the nonprofit people I’ve hired to sell Turnkey’s services to nonprofits? They were all women. And when we talked about their discomfort, it always came back to the same thing: “I feel uncomfortable being ‘sales-y.’” That’s another way to say, “I don’t want to ask for something for myself.”

Now, over 27 years I have had a lot of experience with both men and women who were not cut out for sales. But in my own little anecdotal study, I have seen almost 100 percent failure in women who have come from nonprofit to begin to sell to nonprofit. The one female employee who did not fail and came from nonprofit also had an interesting way to think about her efforts to sell Turnkey services. She became aggressively, adamantly (sometimes to her own detriment) aligned with the constituent, not the client.

She got out of her double bind by asking for the constituent, not for herself. Happily, it made her great at her job. Occasionally, I would get a phone call from a client complaining about her assertiveness, but it almost always turned out to be that she was advocating too aggressively on the constituent’s behalf—except for that one time involving a large bottle of some brown alcohol and a drinking game. Everybody gets one coupon…

Now it makes perfect sense to me why we have so many amazing women in nonprofit, and it also make sense to me why I personally came to serve nonprofits. Having come from an intensely conservative rural farming community with strong role segmentation (a nice way to say, “girls don’t drive tractors”), I unconsciously sought out a space where I could be strong, and not be perceived negatively. I too, had to advocate fiercely on behalf of nonprofit constituents via my company. Nonprofit is a professional place I can be assertive, competent and advocate strongly for something without all the negative flak that comes with doing it. While I am happy that I have this arena in which to be competent, I am sad that the world at large is not built to reward competent women who advocate for themselves in the same way that men do.

In my production area, my team has a sign: “First we drink the coffee then we do the things.” Maybe as professional women, our sign should say, “First we understand ourselves and others then we change both.”

I’d like to hear from you on this. It kept me up at night, along with these questions:

• While the double bind may explain why women flock to nonprofit, why do men still dominate nonprofit C-suites?
• At what cost does competence come when we don’t have the maternal instinct Jiu Jitsu work-around?
• Why do women judge other women at least as harshly as men judge women?
• What is the double-bind impact on other minorities, and how does that impact nonprofits?
• What can and should we do about any of it?

How to Stretch Impact Measurement Dollars

The Power of an Entrepreneurial Mindset in the Nonprofit Sector