You have likely been in the situation where a current or new major gift donor reaches the $500+ cume level of giving. Either the major gift officer drops everything to handle him or her, or the donor is handed off to someone who should not be dealing with donors or the donor (just sits in the system and stagnates). 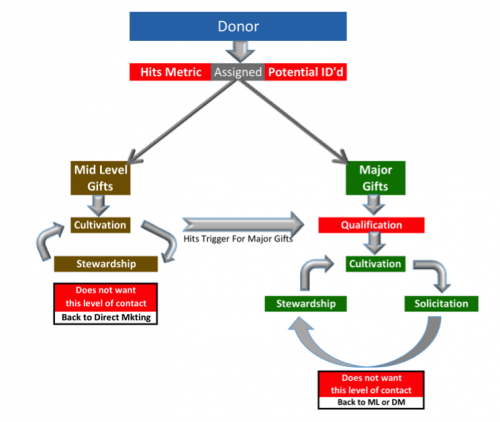 These are not unusual situations, and ones we often interact with. And, when you boil new donor management down to it’s essentials, the two basic questions are:

I am going to address these two questions.

Of course, this discussion assumes you have some sort of a prospect identification system in place, whether it’s a dedicated staff member with a full array of research tools available to them or a more basic system that triggers staff to pay attention to certain individuals that come your way. By prospect system, I mean a process that attempts to discern capacity, interest and inclination.

But first a little side trip on definitions. Many of our colleagues in major gift fundraising call solid, long-term donors “prospects.” I don’t know where this practice originated or why it continues because a prospect is NOT a donor. Nor is a donor a prospect.

The definition of a prospect is “a person regarded as a potential customer or donor”—emphasis on the word potential. They have not given yet. They are not donors. Jeff and I feel very strongly about this choice of words because if you regard a good donor as a prospect, you will be looking at them and treating them solely as a source of revenue. And that is not good for all the reasons we have explored many times in this blog.

Now, if you mean, by using the word “prospect” that a current donor is a prospect for the major giving program, then I can understand the use of the word. So, there is a donor who has given $650+ cume in the calendar year and some research has shown they have a great deal of capacity, then I could see the point that this donor is a “prospect” for the major gift program.

A Donor Who Has Reached $500 Cume Threshold

Back to handling that current or new donor who has reached the $500+ cume threshold; here is the process we recommend: In addition to having a major gift program with major gift officers (MGOs), decide to create a mid-level program (just below the major gift program), to (a) create a pipeline for major gifts, and (b) reduce attrition and increase giving from this important group of donors.

1. Establish criteria for what constitutes a major donor and a mid-level donor. Make sure this criteria is cume giving for a calendar year, not a fiscal year. Donors think and act calendar year. You could start at $1000+ cume for the major gifts and $500 to $999 cume for mid-level. If you have a larger active donor file then this criteria will be higher. Or lower if smaller.

2. Put someone in charge to move these new donors through the system. Do not make it a current MGO who is managing a caseload. They need to manage their caseload.

3. Based on cume giving in a calendar year, put the donor in either the mid-level or major gifts track. In the mid-level track, the point is stewardship and cultivation. The main objective here is to let the donor know—via letters, emails, phone calls—that their giving is making a difference. The mid-level function we are suggesting here does not replace direct mail solicitation.

4. Note in the mid-level track that the donor can move solely back into direct marketing if they do not want this extra layer of stewardship. Also note that in the major gifts track if the donor signals (by not responding to you or a direct comment) that they do not want a more personal relationship with you then they go back into the mid-level and direct marketing channel.

This whole system of managing the current or new donor that reaches $500+ cume threshold is meant to accomplish two things. First, if a donor of yours has reached this level of cume giving, he or she requires, in our opinion, more attention on your part. You need to increase the level of thanking and reporting back. Secondly, you need to have some sort of pipeline for major gifts and this approach will accomplish that.

All of this falls in line with our thinking that more efforts and more investments in infrastructure (labor and systems) need to be put in place to care for these good donors who have shown they really do care about your cause. Be particularly alert and diligent to make sure this happens.

Now to the second point on the intersection of major gifts with mid-level. Our team just finished some analysis on the upper end of the active donor file of a major charity in the Midwest. It was not surprising to find, once again, that good donors are running out the door at an alarming rate. They are leaving the organization not because something terrible has happened that has forced them out. Nope. They are leaving because of neglect.

The organization, much like many we see every day, woos the donor in (acquisition) with a promise of doing something good and then ignores them to the point that they leave. This ignoring takes the form of managers not developing strategies or not giving their donor management system and staff the resources they need to let good donors know that they are appreciated and that their giving is making a difference.

The result: donors leave. And they leave at outrageous rates. On average, four to six of every 10 donors leave the organization they joined just 12 months earlier. Contrast that to donors that are properly taken care of leaving at a rate of 0.5 to 1 in every 10 donors! Huge difference. And all of this affects the bottom-line in a significant economic way.

Managing Donors Moving Up in Giving

All of this is why Jeff and I—and our team of associates around the country—are obsessed with figuring out how to manage donors who come in the organization and are moving up in their giving. This is an important topic for two reasons:

Earlier, I provided recommendations on what to do with donors who reach a giving threshold. The whole point was to think about and take action on donors who are moving up in their giving. Why? To honor and value them and keep them.

If you are following our recommendations, in some form or another, on “What To Do With Donors Who Reach A Giving Threshold,” then the next step is to develop a system for moving donors who qualify from mid-level to major gifts, which is the focus of this post. Here are three points to consider as you design your system:

Instead, if all the MGOs caseloads are “full,” hire more MGOs to take on these new donors (yes, you can afford it). Also, consider putting in place a full time staff member who functions as the “holding and transition function” between mid-level (and outside sources) and major gifts. The major point here is to design a system that protects the current MGO while handling the good donors who are coming in.

If you are a manager of mid-level or major gift programs and you have the authority to create these systems, the last point I want to make about this subject relates to you and your attitude about all of this. Jeff and I find that many managers find this subject of creating systems to handle more donors moving up in their giving a major hassle or burden. For them it is “something to be dealt with”.

This is so interesting to me. Here you have more and more donors coming in the door and expressing their desire to increase their support for the organization and this is a problem? It seems like an opportunity to me!

I know all of this is not easy, especially if you are a manager who has to deal with a tightwad CFO or CEO who doesn’t value donors. I know. But don’t let those attitudes color yours. Keep your head up and focused on the wonderful thing that is happening here and do the best you can to create systems to nurture and care for these good donors.

The Problem With Giving Societies and Membership Programs