It was budget time, and the manager was asked by finance to provide a forecast for major gifts for the coming year. The manager and the chief financial officer discussed how they should arrive at the right number and the CFO said: “Look, just take what they (the major gift officers) did last year and add 10 percent. It’s what we do every year.”

And that, in a nutshell, is what major gift success looked like for that CFO and hundreds of other nonprofit managers. It was a trend line heading up in yearly increments of 10, 15 and even 20 percent. That was success.

And this captures what most folks think major gifts is all about. It just gets better and better every year, so just accept it and get with it!

I’ve personally never experienced success like that, in any area of life.

Take an investment. You may start at one place. It will go up, then it will go down, then up and, if you watch it carefully, you might make a little money.

Or a product idea. Last I checked, it takes 1,200 new product ideas to come up with one successful launch. That sounds like a lot of downward stuff happening before you go up.

Or a relationship. I’m always amazed at the answers I get when I talk to a couple that have been together for many years about how things have been going.

And one of them says, while the other one nods approvingly: “You know, it just gets better and better.”

So then I ask the follow up question: “So has it always been good? Has everything always been peachy?”

And then it comes out: “Well, we’ve been through some difficult times, you bet. It wasn’t pretty there for awhile….”

And I am reminded that even in relationships, while the trend line might be up over time, there are quite a few ups and downs along the way.

Even nature goes through a cycle of life and death and life. Up and down. Recycle. Renew.

So this notion that an individual relationship with a major donor is just going to be an upward trending cakewalk is just not true—because it’s not going to be that at all. It will have its ebbs and flows like everything else in life.

In other words, success in major gifts will look more like this: 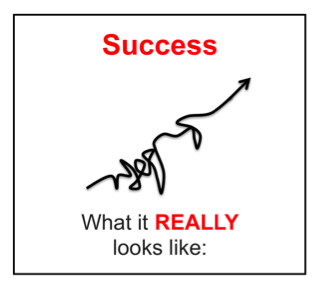 It will start in one place and wander. And that is what you should expect. And that is how you should manage it. The path toward fully cultivating a donor in major gifts will not just be a matter of 1-2-3 and bam, it’s done! It will be a journey with many paths.

Jeff recently wrote about major gift work being hard. If you have not read his post, do it. It will give you a look into the reality of your work in major gifts. But what I am writing about here is what to expect as you take the major gift journey. Here are the most important realities we have discovered:

These are some of the up and down kind of things we have observed in this work. Do you notice one theme that runs through all of them? They are not a straight line going up. It is a bit of wandering, like all of life.

So, I believe the path toward success in major gifts is a bit of trial and error, of ying and yang, of back and forth, of yes and no. It is not a straight line going up. And since this is true then there are certain principles you must internalize to keep yourself grounded.

1. Take the “defeats” in major gifts as simply passing events vs. conclusions. I know that when something “bad” happens in your day, it makes that day awfully bad. But that event is neither the end of your professional life nor is it the final chapter in the relationship with the donor. Stand up, dust off and keep going.

2. Value the long term in every relationship you have with each donor on your caseload. If you value the person more than their money you will be able to ebb and flow with them more naturally and wisely. And that will be good for you and for them.

3. Don’t think that the final word is actually the final word. I have trained myself to think positive about every “no” that comes my way. That is not to say it doesn’t affect me in the moment. Of course it does. But after that initial whack on the head I say to myself: “Try again.” And I do. If your donor has not done what you expected, that’s OK.

There is likely a very good reason. So, treat the donor with respect (as you deal with him and also in your head) and try again. And that trying again should not be an immediate action. Think it through. Analyze what happened. Try to discern the reason. If you can, ask the donor. But do it without pressure and wanting. You may very well be looking at the final word and that means you need to move on. But often, it isn’t, and that is why you need to figure out your next step.

4. Lastly, remember, YOU are OK. This may sound trivial but it isn’t. Just because something hasn’t gone as you expected, does not make you a bad person or having failed in some way. While the situation you face could have something to do with you, it likely doesn’t so don’t start there.

You can see by this writing that I am trying to persuade you to think of your success in major gifts as a journey with paths that go up and down. If you can travel in this manner the “downs” will not get to you as they do now. And your journey will be a lot more pleasant.

The Problem With Giving Societies and Membership Programs