Helping nonprofits in their sincere efforts to make the world a better place makes one very sensitive to organizations that use their nonprofit status for purely financial gain.

There is one group that comes to our attention as particularly egregious. Millions of Americans regularly come together to witness the spectacles that it stages. Yet, this organization compensates oft-injured entertainers with far less than minimum wage while, at the same time, pulling in billions of dollars from ticket sales, sponsors and collateral sales.

Under the NCAA’s rules, universities are allowed to provide athletes with scholarships to cover tuition while they are NCAA-eligible and basic expenses, like textbooks, and room and board. But most other forms of compensation are banned.

Last week, the U.S. Supreme Court, in a unanimous 9-0 decision, reshaped the relationship between the NCAA and the athletes who play college sports. The decision did not involve cash payments to college athletes. However, it may pave the way for a future Supreme Court ruling on whether college athletes should be able to earn money for playing sports—either directly from their universities or through lucrative endorsement deals.

Full disclosure: I (Otis) am a former Division I college athlete who played basketball at the University of Virginia (UVA), which was the 2019 Division I men’s college basketball champion. I played in Virginia’s first-ever NCAA basketball tournament appearance in 1976, a 69-60 loss to DePaul University. Back then, the NCAA invited only 32 teams to its tournament. Since then, the NCAA has doubled the field to 64 teams and has increased its profits from the tournament exponentially. 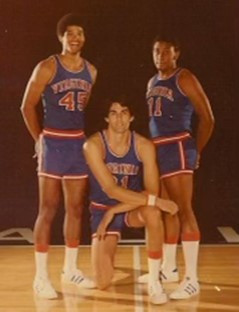 Why was the Supreme Court’s decision so important, so overdue, so positive? We’re going to focus here on the NCAA’s stewardship of men’s basketball, that which we’re most familiar. But the policies and marketing strategy the NCAA uses for basketball is consistent with other sports it governs.

The NCAA Division I Men’s College Basketball Tournament was formed in 1939 when just eight teams were invited to compete. The name “March Madness” was co-opted in 1982 from the Illinois state high school basketball tournament, which had used the phrase since 1939.

Today, the NCAA resembles an enormous marketing machine for high-end workout gear. But it wasn’t always this way. Its first executive director was a former sportswriter named Walter Byers, who founded the organization to protect amateur athletics from both the creeping influence of capitalism and the corrupting forces of gambling. I can recall early-season team meetings at UVA when FBI agents warned us how to identify a come-on by professional gamblers. Today, the NCAA states that it helps more than 480,000 student-athletes “succeed on the playing field, in the classroom, and throughout life.” The NCAA’s original charter was to keep amateur athletics free from corruption.

That was then, and this is now. The 2016 book, “Indentured: The Inside Story of the Rebellion Against the NCAA,” describes how it is now the NCAA itself from which the players need protection. The combination of a free workforce (the athletes), a dedicated fan base (the alumni) and ever-expanding marketing channels (television) created an explosion of profits. Only when the amounts of money involved in major college athletics (read: football and basketball) became too massive to ignore did the situation attract critical attention.

As an example of the money involved, in 2014, ESPN paid the NCAA $7.3 billion for a 12-year contract to broadcast the college football playoffs. (Note: This contract was only for the playoffs. It doesn’t include regular-season games.) Then, in 2016, the NCAA announced a new agreement with CBS Sports and Turner Broadcasting that extended its existing broadcast rights deal for the Division I Men's Basketball Tournament (March Madness) through 2032 at a rate that will eventually increase to more than $1 billion per year.

So, the NCAA is one heck of a marketing machine. But how well does it take care of the players? “Indentured” got its title from the fact that, despite the massive revenues generated by the NCAA, the athletes still receive nothing beyond basic scholarships. There is a popular myth of the “full-ride, four-year scholarship.” But as in my day, scholarship letters must be resigned every year and can be terminated at any time, for any reason.

A small but significant number of college athletes suffer career-ending injuries while playing college sports. The only guarantee they have regarding their education is that once admitted, they can continue at the school until they complete their degree. But in years when they cannot compete, they must pay full tuition like any other student, forcing many to leave without a diploma. Likewise, medical treatments for injuries are not guaranteed beyond an athlete’s scholarship years. After my playing days at UVA were over, my father had to shame the school’s athletic director into paying for surgery to repair a fractured maxilla and lost teeth that I suffered while playing.

The NCAA says that it regularly “financially assists student-athletes in need of educational materials, clothing, and emergency travel expenses.” However, its 2019 tax form reveals it paid $0 in “grants and other assistance to domestic individuals” that year. In 2014, when the University of Connecticut Huskies won the Division I men’s basketball championship, star guard Shabazz Napier said he often went to bed starving because of NCAA rules. Although it is unusual for a college athlete to speak out in this way, this situation is not uncommon.

Thanks in large part to March Madness, and the television and marketing revenue it generates, the NCAA now takes in more than $1 billion a year in revenue and has $300 million in the bank. Its president, Mark Emmert, has a base salary of $2.7 million a year, more than any public college president in the U.S. And while that sounds like a lot of dough for the head of a nonprofit organization, keep in mind that 36 Division I college basketball coaches make more. The highest paid college basketball coach is the University of Kentucky’s John Calipari, who receives just over $8 million annually. With all this money sloshing around in the system, it’s small wonder that the FBI began to indict coaches for crimes.

Katrina and I talk about these issues every spring when we watch March Madness. Sometimes I feel like a witness to a crime who stands there and does nothing. I know the deal. Rich, mostly white men rationalize that poor, mostly black athletes need to be protected from the corrupting influence of money and those that would take advantage of them. They argue that the measures they take to shield them (even as their organization is raking in over $1 billion a year in revenue) are justified, even noble. Like that line in the movie “Miss Congeniality,” “It is a scholarship program.”

Wendell Carter plays for the NBA’s Orlando Magic after playing at Duke University for a single season. He is a so-called “one-and-doner,” a player who goes to college for one year because the NCAA and the NBA agreed that a player had to be 19 years old before he could enter the NBA. After leaving Duke, Wendell’s mother, Kylia Carter, said this at a meeting of the Knight Commission on Intercollegiate Athletics in Washington, D.C.:

The problem that I see is not with the student-athletes, it’s not with the coaches or the institutions of higher learning, but it’s with a system … where the laborers are the only people who are not being compensated for the work that they do while those in charge receive mighty compensation. The only two systems where I’ve known that to be in place are slavery and the prison system. And now I see the NCAA as overseers of a system that is identical to that. So, it’s difficult for me to sit here and not say that there is a problem that is sickening.

Last week’s Supreme Court decision addresses only education-related expenses but opened the door for further litigation. Justice Brett Kavanaugh joined the court’s opinion in full, also writing a separate concurring opinion in which he questioned the legality of the remaining restrictions on benefits for college athletes. Kavanaugh said that college athletics includes “… important traditions that have become part of the fabric of America.” But, he warned, the “NCAA is not above the law.”

So many nonprofits serve noble missions, helping countless people in countless ways. The NCAA is not one of them. It’s time that changed.

Katrina VanHuss and Otis Fulton have written a book, "Dollar Dash," on the psychology of peer-to-peer fundraising. Click here to download the first chapter, courtesy of NonProfit PRO!