Taking a Look Into Humanwire: Policing Nonprofits Is Our Responsibility

The person (in the picture to the right) is named Andrew Baron. You can probably tell that the studio that the photo was taken in belongs to the police, specifically the Boulder, Colorado Police Department. On Nov. 16, 2017, Baron was arrested for taking more than $130,000 from a nonprofit he set up called Humanwire, an organization that purported to help Syrian refugees. 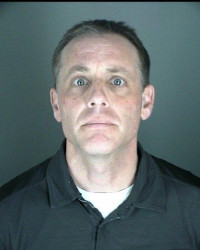 The organization said on its website that donations would go directly to needy refugees, and that “0 percent” would go to operating costs. The scam was exposed by an investigative report in the Denver Post, which chronicled a steady stream of withdrawals from Humanwire’s bank accounts by Baron. For more than two years, all of the donations for Humanwire were funneled into Baron’s personal account. At the same time, more than 100 refugees that had been promised assistance were subject to evictions from their apartments in Greece and Turkey, as well as other hardships.

This is the kind of story that makes the vast majority of people involved in nonprofit work cringe, and with good reason. We’ve all heard the expression, “one bad apple spoils the whole bunch.” It turns out that this piece of folk wisdom has been confirmed by psychologists, who put it a slightly different way: “Bad is stronger than good.” People are predisposed to notice bad events and be influenced by them negatively more so than they notice good events and respond positively. This is what’s known as the “negativity bias.”

Most nonprofits choose to combat the bad apples by taking a passive approach. They focus on their own positive performance—promoting their low overhead, for example, and touting that they make lists of best nonprofits rated by groups like CharityWatch.

And while it’s a great idea to let your constituents know that their donations are being put to good and efficient use, it may also be a good idea to use our platforms to shun the bad actors. It can seem counterintuitive, but psychologists have documented the fact that presenting some negative information along with positive can make your arguments more powerful, more persuasive.

That’s why letting your supporters know about America’s worst nonprofits may be a winning strategy. Plus, for all of us who get up every day and do work that benefits all kinds of causes, bottom feeders like Andrew Baron can’t get enough exposure, and enough jail time.

According to the Tampa Bay Times, the 50 worst charities in America devote less than 4 percent of donations raised to direct cash aid. Some charities give even less. While we recognize the percentage that goes to mission or to direct cash aid isn’t the only thing to consider in evaluating nonprofits, it is important. In one case, over a decade a diabetes charity raised nearly $14 million and gave about $10,000 to patients. Six spent nothing at all on direct cash aid.

These nonprofits often adopt popular causes or mimic well-known charity names that fool donors. Then they rake in cash, year after year. They have paid for-profit solicitors nearly $1 billion over the past 10 years that could have gone to charitable missions.

Communities are powerful in their ability to modify the behavior of its members. These people are, sadly, parts of our community. It’s time for a good shunning.

Overcoming the Volunteer Shortage at Nonprofits