When terrible things happen, people want to help. We see the goodness of humanity come out during and after every disaster. Unfortunately, the number and variety of calamitous occurrences has increased in recent months in an unprecedented way. Earthquakes, tsunami, floods, and now large-scale terror attacks somehow are becoming our daily norm.

There are many articles you can read, blogs you can comment on and pundits you can yell at on your TV that focus on identifying the “whys” of such tragedies. What I’d like to focus on here are the less-discussed, behind-the-scenes fundraising efforts that accompany high-profile disasters, making it possible to aid those in need.

As development and nonprofit professionals, we know that any service that needs to be delivered or aid that needs to be given must have funds that equal the task. I was a director of development at a local American Red Cross chapter for three years and can still remember the heightened sense of urgency that accompanies the fundraising response to a disaster—emergency board meetings to agree to activate an emergency fundraising plan, a call for volunteers to staff phone lines, a plan to handle a large influx of donations and account for the money at every step of the process, etc. It can get a bit chaotic.

Crowdfunding has changed the face of disaster/emergency fundraising. It offers a way for people worldwide to offer monetary assistance to anyone, anywhere, anytime. It is hosted on platforms that the nonprofit does not have to own or run, thus taking away a lot of logistical details that can bog down an emergency response.

But crowdfunding brings with it a new set of challenges to be addressed. Maybe we won’t even call them challenges—let’s say crowdfunding means fundraising professionals must learn to navigate new pathways. Why? Two reasons. One is that there are numerous crowdfunding websites out there, with more coming online every day. Two, money that comes in through a site like GoFundMe is not automatically considered a charity donation.

Think about it. Your friend Lisa has another friend whose child is sick and the family needs help with medical bills. Lisa starts a GoFundMe account, puts the message out on Facebook, and within three days the family has $7,000 for medical bills. This is an amazing way, relatively new in the grand scheme, for people to come to the aid of others in need. But what if Lisa had chosen a less vetted site to host her crowdfunding (let's call it  “SureYoullSeeTheMoneyAgain.com"). Arguably, one might question Lisa’s decision-making if she did choose that site, but I think you get my point. There are so many sites out there, it isn’t always easy for the average person to determine which ones are legitimate—to be sure his or her credit card information will be safe and to be secure in the knowledge that the money will go where the site says it will.

The second pathway I mentioned that nonprofits must navigate when using crowdfunding as a response during large-scale emergencies, or really any time we’re engaging for our nonprofit, is the fact that not all gifts given through crowdfunding are actually charity donations. In researching this, I used GoFundMe as the crowdfunding platform, and the incredible response to the horrific terror attack at Pulse, the Latin LGBT nightclub in Orlando, as my crowdfunding “appeal” example.

On GoFundMe, one of the help articles gives this useful explanation of the two types of gifts that can be processed through the platform:

Given that description, the gift you gave through your friend Lisa for medical expenses was a “personal gift” and not likely eligible for a tax deduction. Makes sense, right? You are a person giving money to another person.

But what about charity-driven crowdfunding initiatives? On GoFundMe, there is a section that lists charities that are GoFundMe Certified Charities. Here is the listing of a randomly chosen charity. 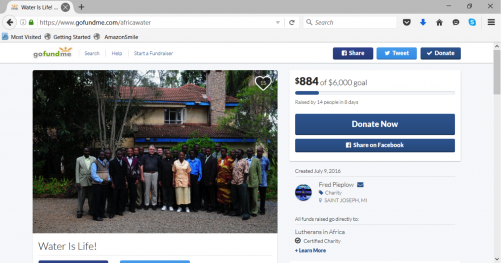 You can see Certified Charity designation in the bottom right corner.

The example above is a small charity raising funds for a non-disaster-specific need. To learn about the large-scale response of the Pulse Victims Fund, I contacted Ida Eskamani, development officer for Equality Florida and the creator of the fund. She was kind enough to answer a few questions to help clarify how this incredible fundraising phenomenon happened.

"[Equality Florida] chose GoFundMe because it is a platform that is familiar to millions of people, allows you to donate within a couple of minutes and truly leverages the power of social media," Eskamani said. "GoFundMe does, however, require that a personal Facebook page is linked with the GoFundMe account to ensure legitimacy. So the page initially began with my name listed, and I managed all pieces of the page; however, it was an organizational effort.”

The response was beyond what anyone imagined; the original fundraising goal was $100,000. That was quickly met and raised. The goal was raised several times and is now at $10 million, with almost $8 million in donations at the time of this article.

If you visit the Pulse Victims Fund GoFundMe page, you will find all of Equality Florida’s nonprofit registration and fundraising details. But I didn’t see the Certified Charity marker, so I emailed GoFundMe customer support to see what they could tell me. Here is its answer: “Although being run by Equality Florida, this campaign is a personal campaign, as opposed to a Certified Charity campaign.”

But don’t worry—this money is being accounted for closely; a lot of eyes are watching this campaign. I asked Eskamani how Equality Florida planned to disseminate the funds. Here's what she said:

The city of Orlando, Equality Florida and the GLBT Center are focused on fundraising and getting the word out to all who qualify regarding the fund and the application process. We are working with Ken Feinberg and the National Center for Victims of Crime to manage disbursement to ensure the process is done in an efficient and transparent way which prohibits fraudsters.

Originally, they were separate funds, as ours was designed from the start to be disbursed directly to victims' families and survivors, while OneOrlando would be distributed to charitable organizations. We were able to bring the city to our side and eventually combine all funds under one umbrella to ensure the process was straightforward for victims' families and survivors. Anyone who was in Pulse nightclub during the shooting, approximately 200 people, qualify for victim assistance.

The OneOrlando fund to which Eskamani refers is a fund created immediately after the attack by Orlando Mayor Buddy Dyer. OneOrlando morphed into a larger group with representatives from a number of local agencies. (You can read about its board, is plans for fund dissemination and its efforts for financial transparency on its website.)

Given Equality Florida’s powerhouse of fundraising, combined with the cty of Orlando’s oversight and partnership with relevant organizations, it appears every effort is being made to make sure this incredible sum of money goes to the people for whom it was intended.

Now let’s bring things back around to crowdfunding after emergencies in general. There are many areas where things could possibly fall through the cracks. Equality Florida and OneOrlando are doing all they can to make sure this doesn’t happen. But not all crowdfunding campaigns have such reputable backing.

As nonprofit professionals, it is up to us to know the details and regulations as they pertain to raising funds in support of our nonprofits’ missions using a crowdfunding platform. If you are planning such a campaign, research the site you are planning to use. Read reviews and check what percentage of the donations the site keeps as administrative fees. Find out if the site you choose has a Certified Charity option and, assuming time in the disaster response allows, set your fund up as one using whatever process that particular site requires. If your fund is set up as a Certified Charity, find out if the crowdfunding site sends automatic tax receipts, or if you, as the nonprofit, are still responsible to do so.

As the fundraising professional that represents your nonprofit organization, you are responsible for finding out the necessary details and for running your crowdfunding campaign in the most appropriate way. Whether your campaign is for a large-scale emergency or is a small fundraising campaign, it is still your responsibility to know the regulations and processes that go along with crowdfunding on various platforms. Transparency and accurate tracking are an important part of gaining and keeping donor trust.

I am glad there are such robust and accessible fundraising mechanisms that enable organizations like Equality Florida, OneOrlando and their partner organizations to respond to disasters like the unthinkable attack on the Pulse nightclub.

The world around us can sometimes be confusing, hurtful, hate-fueled and disheartening. I am grateful for the dedicated nonprofit organizations, and the professionals and volunteers that work for them, that are always there to help those in need. And I am proud of the profession of fundraising for making it possible for those life-saving connections to be made. #onelove  #onepulse  #oneorlando