In Major Gifts, Is It OK to Ask Again When Thanking? 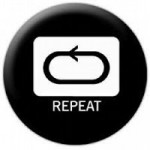 There is a friendly debate going on between a major gift officer (MGO), with a great deal of experience, and me. The subject is about the use of receipt returns in major gifts—that tiny, tear-off "coupon" that is attached to the official receipt that goes to a donor.

The discussion started because we were sitting around trying to figure out where direct marketing techniques end, in the management of a major donor file, and where classic major gift strategies begin.

There are a lot of things one can talk about on this subject. But where our conversation migrated to was the subject of receipt returns in the context of a major donor relationship.

We had agreed that receipt returns serve the useful purpose of encouraging additional gifts from donors. But where we got into a bit of conflict centered on the answer to this question: "How big of a gift has to happen before it is just downright impractical or maybe even abusive to include a return coupon on the official receipt? Is it a $1,000 gift? $5,000? More or less?”

Well, I had to admit that if someone gave $100,000, it might be a little tacky to have a return coupon attached to the receipt. But then, as I thought about it, I said to myself "why not?" What does it hurt? The donor certainly understands. And it may prompt him or her to give again.

But my MGO friend took great exception to that position and said it actually would hurt the relationship.

So, in order to shed light on the topic with some facts, I turned to my good friend and colleague Jon Van Wyk, donor research and fundraising trends guru who works at TrueSense Marketing, for some answers. He is one of our industry’s foremost authorities on donor behavior.

The case Jon presented here is from a chapter-based social service organization. The standard receipt package includes a #10 envelope and 14" form sent with bulk nonprofit postage. Each form includes a letter targeted to the donor, recognizing his or her gift amount, date and appeal in which he or she gave (for the donor’s record), and one perf-off panel, giving the donor an opportunity to give again with a soft ask (reply device). A courtesy reply envelope is enclosed so the donor can conveniently respond. Receipts are run once a week. This is the type of receipts package we refer to in this post.

Receipts testing has been conducted for many years. And the hard giving data always has supported the decision to include an ask with the reply device. Other direct-response practitioners have supported these findings through the years as well. It is now considered a part of best practices.

But here we explore two facets of receipt giving:

So, the first question to answer is: Should receipts go only for small-sum donors or does it matter? The graph below shows the percentage of a donor’s total giving portfolio that was in response to receipts in 2012 by their prior annual cumulative value (2011). 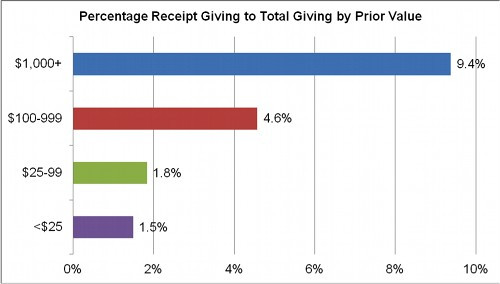 The average across the giving ranges is 3 percent. Donors at the $100 to 999 level gave to receipts at 1.5 times that proportion. The $1,000-plus donors’ receipt giving is more than three times the average. Clearly, the further up the pyramid you move, the more likely the donor favors receipt giving. Hmm. That was surprising.

Now look at the next chart. As donors advance up the loyalty lifecycle, they give a higher proportion of their giving to receipts. Goodness! Can this be right? 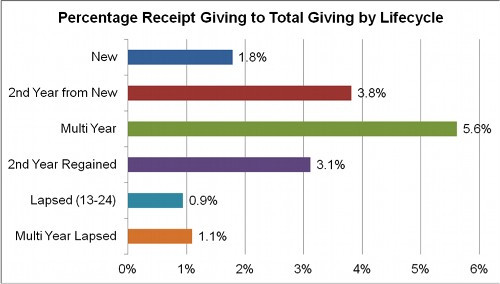 Now, to answer the second question: How well do receipt givers retain? In the no-ask philosophy, one may say, "Fine, you manipulated a receipt gift from a donor, but you’ve hurt the relationship." To address this concern, we examined the subsequent retention of receipt donors versus those who don’t respond to receipts.

The graph above shows that donors who gave to receipts in 2011 were much more likely to be retained as donors in 2012. In fact, the overall retention of receipt donors is 51 percent higher than those who didn’t give to receipts.

Goodness! I had an inkling that receipt returns were a good thing. But this information is quite eye-opening. I think it is fair to agree with Jon’s conclusion, which essentially suggested that the soft ask in receipts and the giving it generates is a good thing, both for giving and retention.

Now, having said all of that, Jeff and I think there is a limit to when you should use a receipt return. If a donor gives you $100,000, we don’t think it is appropriate to include a receipt return with his or her thank you and receipt. Even the circumstances around a $50,000 gift or even $25,000 and possibly a $10,000 gift may suggest the same. And we have talked about this quite a bit.

Supposing, for instance, that you have a donor that just keeps on giving $5,000 at a time? Let’s say this donor has tremendous capacity and $5,000 to him or her would be petty cash to us. Might a receipt return be OK in this situation? Maybe.

So, the principle has to be that it is always good to insert your personal judgment into the equation. We have consistently said that each donor on your caseload needs an individual communication and ask plan. It follows that your knowledge of the donor and your feeling about receipt returns should be applied on an individual donor basis. Do not create a blanket policy.

There is one thing for sure, though. There are many donors that want to and can give again. What strategy do you have in place to encourage that gift that respects the donor? That’s what we want you to think about.

The Power of Executive Communications for Nonprofits

The Case for Ending Giving Tuesday