It’s spring. Birds are chirping, flowers are growing, and television stations are airing more public service announcements (PSAs) than at any time in history.

Based on information provided by Nielsen, the marketing research company known for its television ratings, PSA airings in the first four months of 2022 grew by 8%, compared to the same period just one year ago — and increased by a remarkable 60% compared to the same four-month period five years ago.

This growth continues a trend that Nielsen has seen developing over the past five years, as television stations and networks increased their donations of free advertising time to nonprofit organizations that air PSA campaigns.

For nonprofit organizations, trade associations and government agencies, this growing abundance of available free advertising time has been of great help in delivering their messages to large national audiences.

Nielsen has been showing steady annual PSA airing increases for years, with PSA airings up by 13% in 2018, 9% in 2019, 3% in 2020 and 12% in 2021. Only starting in March 2020 — when the nation was hit by COVID-19 and stations turned to running special health messages — did PSA airings grow by just 3%. However, in 2021, as station activities returned to normal, Nielsen saw the growth in PSA airings make up for lost time – increasing by 12% for the full year and bringing the full-year increase for the five years since 2017 to a staggering 50%. 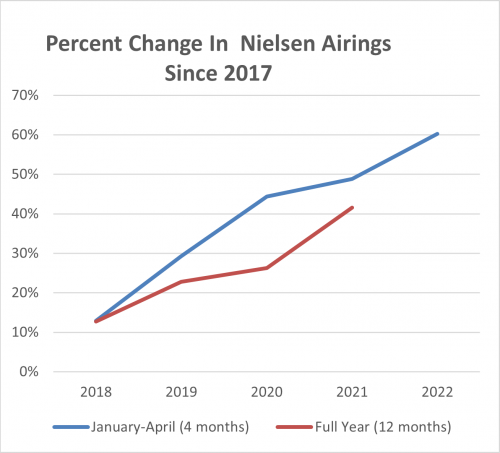 Broadcast stations and networks have been airing PSAs for more than 70 years. In fact, they have been airing PSAs since there has been television. These PSAs have included some of the most memorable advertisements in television history, such as the USDA Forest Service’s Smokey the Bear’s plea to prevent forest fires and, more recently, the Ad Council’s “Love Has No Labels” campaign to promote racial, ethnic and gender harmony.

Yet, the news about this five-year surge in PSA usage has surprised many industry analysts. Some attributed it to the growth in cable networks, such as Fox News, MSNBC, CNN, ESPN and a multitude of new regional cable sports channels. Others have suggested that it was due to the emergence of digital networks (known as “diginets”), introduced when over-the-air stations switched to digital broadcasting formats. Still others believe the growth in streaming and connected television, which has started to attract advertising time away from broadcast television, has driven the cable network growth. The answer is probably that all combined to make more free advertising time available today than at any time in history to help nonprofits reach large national audiences.

Today, according to Nielsen, stations and networks are donating more than 1 million free airings a month to nonprofit organizations for PSA campaigns. In a typical month, stations are running almost 1,000 PSA campaigns; these campaigns received 12.4 million Nielsen detected airings in 2021, up from 8.8 million in 2017. This does not include any airings that stations provided to the Ad Council, whose information is not publicly available. 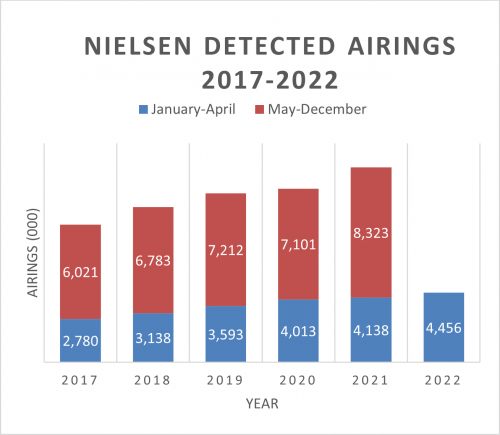 The total estimated value of the free donated advertising time made available by stations and networks is more than $2 billion annually — and could very well exceed $4 billion when donated advertising time to the Ad Council is included. These donations are what are known as in-kind donations, which represent donations of services rather than money made to qualified 501(c)(3) nonprofit organizations and 501(c)(6) trade associations to help them to fulfill their missions and communicate with the communities they serve.

Free public service announcement advertising is a uniquely American practice. It is not something broadcasters are required to do. This makes it a special opportunity for nonprofit organizations that chose to take advantage of it.

Steven Edelman is a founding partner and president of Connect360 Multimedia, a marketing and communications company that works exclusively with nonprofit organizations, trade associations and agencies of the federal government. Steve is a CPA who has published numerous articles about accounting and compliance issues related to PSAs. He is a member of the nonprofit industry committees of the American Institute of CPAs and the New York State Society of CPAs.

Walmart Launches Spark Good Round Up and Registry for Nonprofits