Mention fundraising, and the most likely initial response will be something like, “Oh, I don’t like to ask for money.” The act of asking another for a charitable investment is often seen as the sum total of fundraising.

Those of us who have done it successfully, those who have been there, know this isn’t true. We know it’s not magic. It’s a matter of attitude.

It’s not hard. With the right understanding, you can experience it too. When the time is right to ask, soliciting a charitable gift can—and should be—one of the most rewarding things you’ll ever do.

Approached correctly, it’s The Triple Win™. Getting the “yes” is your win. Satisfying the dreams and values of the charitable investor is their win. Changed lives is the third. I can’t think of anything more productive and positive.

The most important thing to remember is that being successful in fundraising is much more about how you think than what you do. The right mindset and broad understanding is the essential prerequisite to success.

Many of us think of soliciting as some sort of adversarial transaction. We think we have to perform some sort of dodge or feint, or perhaps provide a quid pro quo. Hence, the perennial popularity of the charity auction.

What’s often seen as an adversarial encounter fraught with anxiety and pitfalls can actually be a relational love-fest. Yes, it can.

When we don’t see the solicitation as an adversarial confrontation, what we often settle for is the bloodless, programmed negotiation for our programs. I can think of little else that will automatically generate a full-throated yawn.

What donors are looking for—what they’re seeking—is nothing less than personal self-fulfillment. Any charitable organization that provides this (and it isn’t all that hard) is already to third base.

What donors expect is another matter. After years of arms-length encounters with overzealous, tactless solicitors, donors expect the bait and switch. The mouse trap baited with cheese.

Many, many, donors would prefer a trip to the dentist over being approached for a charitable investment.

Why? Because we’re focused on the transaction, even as donors are seeking a relationship.

So, how do we break this mad circle?

What is it we’re doing wrong?

First, we make it about money. Yes, money is involved, but the act of soliciting and receiving a charitable investment is definitely not about the money. In its purest sense, securing a gift is a partnership between giver and receiver to create a lasting intangible benefit for each.

Second, we often make the ask personal. We’re scared sh**less that we’ll get a "no." If the answer is no, it often doesn’t mean “no way” and it definitely isn’t personal to you. So, don’t make it so. Donors are people too. Individuals have their own challenges and distractions. A no is often “not now,” “not in this way” or “not for this particular purpose." The mindful solicitor knows how to meet these concerns for the benefit of all.

Third, we see donors as the “other.” We depersonalize them by placing them into a category of other beings who can’t possibly share our passion in the way we do. After all, we’ve got the pure mission. Really?

Fourth, we have nutty ideas about money and how it functions. Many an ineffective solicitor is hamstrung by a dysfunctional view of money with a morass of mixed feelings about its morality.

Perhaps the real killer in a solicitation is when we’re a getter before we’re a giver. Every solicitor must have made his or her own thoughtful gift before seeking one from someone else, if they’re to be taken seriously. If their sincerity is to be believable.

Understand this truth: Donors are the Drivers®. This is so important and fundamental, it’s Principle 1 of The Eight Principles™. Simply stated, it says that donors drive philanthropy with their visions and values. They are the fuel and force behind philanthropy.

This is counterintuitive to many nonprofit leaders, who think it’s the urgency of their cause and the strength of their programming that is the engine of philanthropy. Nothing could be further from the truth. If you’re in this camp, it’s time to leave.

OK, so you’ve properly prepared. The moment has arrived and the table is set. Just how do you do it?

The first step is to engage your potential investor. What does this mean? Some of you will know the term “stewardship”. It’s the time-tested fundraising term for bringing the donor to a point of awareness and understanding how their gift will benefit them.

When the potential donor is ready to be asked—and you’ll know when—simply ask, “Will you consider an investment of “$____” for “_____.”  Keep it simple, sweet and direct.

Don’t hedge, equivocate or be oblique with an apologetic approach. Don’t say “I would like to ask you” or “I was hoping to ask.” Both these really don’t ask, they merely express your anxiety.

Once the simple request is on the table, stop talking. Don’t say a thing. You may think the silence is deafening and interminable. But it’s not. You’ve made the request, so allow the potential donor to process it and respond.

When the potential investor does respond, listen very carefully to the response. Often, charitable investors respond by asking a question. If they do, answer the question and say nothing else. The request is out there. Trying to sell it at this stage is definitely counterproductive.

I’ve seen many well-meaning solicitors convince a donor, only to continue talking and dissuade them at the same meeting. We know why we keep talking. It’s our anxiety. And that comes from the attitudes I’ve already mentioned.

Solicitation is an act of service. And as much as you might like to think it's about your cause, the donor’s response is much, much more about them and their goals. Never forget, you’re serving he needs and desires of the donor.

Nonprofits seek money from donors to finance their programs so they can executive those programs. This is a transaction. The donor simply serves to facilitates another’s ideas.

There’s a different paradigm. One that creates true synergy and maximum impact: 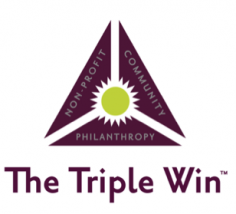 Properly understood and executed, The Triple Win™ delivers real synergy. That’s when one plus one really equals three.

Moving to The Triple Win™ isn’t hard. It requires a totally different mindset. It demands accepting donors as your partners.

Hardly anything worth doing was ever accomplished without broad support, however.

Success is waiting. Go out and achieve it.

Larry believes in the power of relationships and the power of philanthropy to create a better place and transform lives.

Larry is the founder of The Eight Principles. His mission is to give nonprofits and philanthropists alike the opportunity to achieve their shared visions. With more than 25 years of experience in charitable fundraising and philanthropy, Larry knows that financial sustainability and scalability is possible for any nonprofit organization or charitable cause and is dependent on neither size nor resources but instead with the commitment to create a shared vision.

Larry is the author of the award-wining book, "The Eight Principles of Sustainable Fundraising." He is the Association of Fundraising Professionals' 2010 Outstanding Development Executive and has ranked in the Top 15 Fundraising Consultants in the United States by the Wall Street Business Network.

Larry is the creator of the revolutionary online fundraising training platform, The Oracle League.

Reach Larry on social media at:

5 Ways to Get Your Donors Excited Again to Give

The Power of Giving Thanks

6 Steps to Cultivate a Transformational Gift