Donor fatigue is a slow burn. Whether it manifests itself through a dwindling regular contribution, a shift in finances, a loss of inspiration, event support or an unforeseen reason, a once-enthusiastic financial contributor may come to a point where they’re just not as interested as they used to be. I’m going to examine why this happens and what you can do about it.

The donor fatigue phenomenon can be seen across all types of revenue streams – foundations, corporations, major gifts, etc.; however, I’ll use an event donor to tell our donor fatigue story. Time after time, I’ve seen it happen. A donor buys a $25,000 table at a nonprofit’s annual capstone event. They do the same thing several years in a row — and then staff start hearing cues: “Oh, this is going to be the last time I’m doing this,” the donor says. Or, they explain why they can’t spend as much on a table. It’s very straightforward: $25,000 through last year, $12,000 this year. Maybe they’ve been to that event enough. Maybe their financial situation has changed. Maybe they’re not inspired by the organization’s programs anymore. Maybe they feel like they’ve done their part. When you spot such fatigue, it’s time to tailor your ideas — with innovation —  to bring donors back to the table at the level of enthusiasm and investment that helped your organization to thrive.

When I took Harvard Business School’s executive education “Leading Professional Service Firms” course in 2019, I was struck by a clear crossover between professional service firms and nonprofits. Two years later, the Harvard Business Review article “What Professional Service Firms Must Do to Thrive,” described the phenomenon clearly. Like the course, the article offers a deep dive into the life and vibrancy of law firms, consultancies and similar businesses — and includes a graph of different types of clients. The y-axis represents a willingness-to-pay ratio (low at the bottom, high at the top), with the x-axis labeled cost-to-serve (also low-to high). 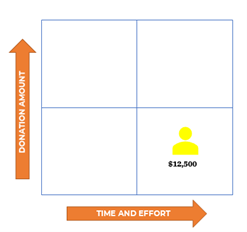 To me, this four-square graph succinctly told the story of many a donors’ relationship with a nonprofit: New donors are in the lower right-hand quadrant, in which an organization spends a lot of money (about six times as much as for repeat donors) to engage them to the point of donating; we’ll think about this in terms of buying an event table for $12,500. 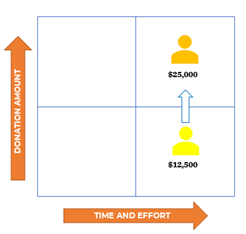 The donor enjoys the event, so over the next year the organization puts a lot of time into having the funder return, this time at the $25,000 table level. Now, they’re in the upper right-hand quadrant; still taking a fair number of resources but giving more. 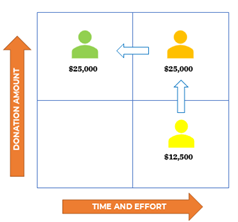 As the relationship continues, and the donor remains committed to their annual $25,000 table, the donor shifts to the upper left quadrant. They’re donating robustly with little effort on your part, oftentimes for years. This is an organization's sweet spot. 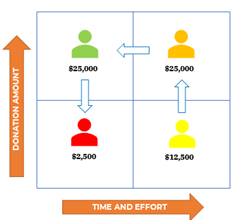 Then, something happens — the nonprofit’s staff might never know what — and the donor’s interest wanes, bringing them down to the bottom left-hand square. This downward movement is called donor fatigue. The organization stopped nurturing its connection with the donor and, consequently, their financial contribution diminished.

Maybe it was the lack of communication between development staff and the donor, or maybe the organization didn’t innovate enough to hold their interest. Whatever the reason was, the organization is now faced with the challenge of reengaging this donor and must refocus its efforts on cultivation and revert to a mode of ‘courtship’, if you will, to make sure the donor understands why your cause is relevant and worthy of their support. There are key ways to do that — and there are strategies to make sure that you don’t have to go back to square one.

Nonprofits can pinpoint donor fatigue via different revenue streams, even including foundations and corporations. Supporting organizations might change their funding priorities, or only support a nonprofit a certain number of times. Regardless of where or how donor fatigue settles in, the fix is the same: asking and innovating. That’s probably my biggest takeaway from the Harvard Business Review article. It’s crucial for nonprofit leaders and staff to re-engage donors using creativity, so that they’ll buy back into the organization’s programs at their peak level. And wooing back a robust donor is one of the hardest things to do as a fundraiser.

Asking supporters frequently to donate is important, but if they’ve already said “no,” asking again likely won’t change their answer. Ultimately, then, innovation becomes crucial; it provides donors with new reasons to support a nonprofit. Organization leaders should be able to say: “We have this new program; I’ll show it to you.” Or, “We’re doing something new and creative that might interest you.”

During the pandemic, innovation has taken on special importance. From implementing giving vehicles, such as FreeWill, to solicit online planned gifts and adapting cryptocurrency donations to expand your donor pool, to shifting from in-person events to online or hybrid models, the importance of innovating will outlast our current situation. Having an adaptive and flexible mindset will always benefit fundraisers.

While nonprofit staff should always be on the lookout for donor fatigue by checking their organization's financials and communicating often with major donors (I recommend a quarterly check-in and, for events, post-event feedback conversations), it’s possible to prevent fatigue in the first place. To do so, adopt innovation as a mindset. Stay creative. And refresh your strategic and fundraising plans every five years to support that ethos.

Such a strategy not only keeps generous donors giving, but it also allows them to see the benefit of their investment. Moreover, as an organization grows over the years, so does its impact, attracting more donors. When a nonprofit’s impact is greater, people want to be part of that. It's an upward cycle, and the more that nonprofits innovate, the more they’ll attract donors, and the better off they’ll be.

As vice president of Orr Group, CJ Orr is responsible for a portfolio of work that includes operations, business development and partner relationship management.

On the operations side, CJ is responsible for setting and driving achievement of Orr Group’s financial targets and overseeing office real estate and management. Additionally, CJ leads and supports the efforts of Orr Group’s sales and marketing team to identify and cultivate new business opportunities and build relationships with nonprofit partners, ensuring that the services offered are best aligned with our partners’ needs.

CJ has a broad background in fundraising and development, strategic planning, campaigns, and event management. He has led strategic initiatives and fundraising for several large galas and campaigns. As a project and relationship manager, he executes on the development of strategies and tactics to ensure highly memorable events and campaigns that meet or exceed fundraising targets.