Are Dogs Better Listeners Than Fundraisers? 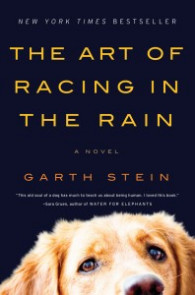 Enzo, the shepherd-poodle-terrier mix hero/narrator of Garth Stein’s “The Art of Racing in the Rain,” believes that, “When a dog is finished living his lifetimes as a dog, his next incarnation will be as a man.”

He knows this from a documentary he saw on TV about Mongolia.

As the book opens, Enzo is old and not far from death. He narrates a story that will make you laugh, make you cry and make you laugh again. And we’re left with no doubt that Enzo will be as remarkable a human as he was a dog.

And that he’d be one heck of a good fundraiser.

Take this monologue, for instance. It illuminates an oft-neglected truth about what is so frequently absent from not only our day-to-day communications, but our lives. And if it’s absent from those spaces, chances are, it’s also absent in our fundraising.

Here’s why I will be a good person. Because I listen. I cannot talk, so I listen very well. I never deflect the course of the conversation with a comment of my own.

People, if you pay attention to them, change the direction of one another’s conversations constantly. It’s like having a passenger in your car who suddenly grabs the steering wheel and turns you down a side street. For instance, if we met at a party, and I wanted to tell you a story about the time I needed to get a soccer ball in my neighbor’s yard but his dog chased me and I had to jump into a swimming pool to escape, and I began telling the story, you, hearing the words “soccer” and “neighbor” in the same sentence, might interrupt and mention that your childhood neighbor was Pele, the famous soccer player, and I might be courteous and say, “Didn’t he play for the Cosmos of New York? Did you grow up in New York?” And you might reply that, no, you grew up in Brazil on the streets of Tres Coracoes with Pele, and I might say, “I thought you were from Tennessee,” and you might say, “not originally,” and then go on to outline your genealogy at length. So my initial conversational gambit—that I had a funny story about being chased by my neighbor’s dog—would be totally lost, and only because you had to tell me all about Pele.

Learn to listen! I beg of you. Pretend you are a dog like me and listen to other people rather than steal their stories.

You see, listening is so much more than a forced courtesy that ultimately makes interactions with our fellow human beings more manageable. Listening is a skill set, and arguably one of the most important a fundraiser can have.

In their book, “Are You Really Listening?: Keys to Successful Communication,” Mary E. Siegel and Paul J. Donoghue wrote, “Before we can learn to listen, it is necessary to heighten awareness that in many instances and with many people we do not listen.”

When it comes to listening skills, we’ve all developed bad habits over the years. From paying more attention to a speaker’s appearance than to his or her words, to pretending to listen when really you're creating your shopping list in your head, to having preconceived ideas that don’t allow you to entertain a differing opinion, to selective listening, chances are good that your listening is inefficient in some respect.

How can you learn to be a better listener?

Start by identifying some of your own bad listening habits. Once you’re aware of what you’re doing, you can take the steps to stop focusing on your response and instead zoom in on what your speaker actually is saying.

Try to anticipate your speaker’s next point. When you anticipate incorrectly, you’ll wonder why, and it will help to increase your attention.

When it comes to fundraising, good listeners get big rewards.