On Thursday, Wounded Warrior Project released the results of the independent policy review it promised in response to the CBS News and The New York Times investigations into its spending, and announced that it had fired two top executives—CEO Steve Nardizzi and chief operating officer Al Giordano. The organization said it had established an office of the CEO, led by board chairman Anthony Odierno, to head up the search for a new leader.

Within a day, a familiar face had volunteered.

John A. Melia, who founded Wounded Warrior Project in 2003 and led the organization until his departure in 2009, on Friday told The Associated Press that he had requested an "immediate" meeting with the organization's board of directors.

"The new leadership of Wounded Warrior Project must do everything in its power to restore its relationship and regain the trust of those it serves and its donors," he said in a statement.

According to WJXT Jacksonville, Melia had no intentions of rejoining Wounded Warrior Project, even as the controversy unfolded. But when he saw photos of Nardizzi and Giordano next to headlines slamming the organization, it "stirred deep pain within him, knowing the scandalous reports were far from what the organization was meant to stand for." He decided he wanted back in. And he wasn't alone.

A Change.org petition calling for Melia's reinstatement popped up over the weekend, and has more than 460 of the necessary 500 signatures. A Facebook group called "Restore Trust" also appeared, endorsing Melia for the position. The page, founded by Melia's brother, Jim, has about 800 "likes" and appears to be the official communications hub for Melia's reinstatement campaign, sharing articles about Melia from other sites and releasing statements on his behalf.

One of those statements? A 10-point plan for restoring trust in Wounded Warrior Project, published Sunday: 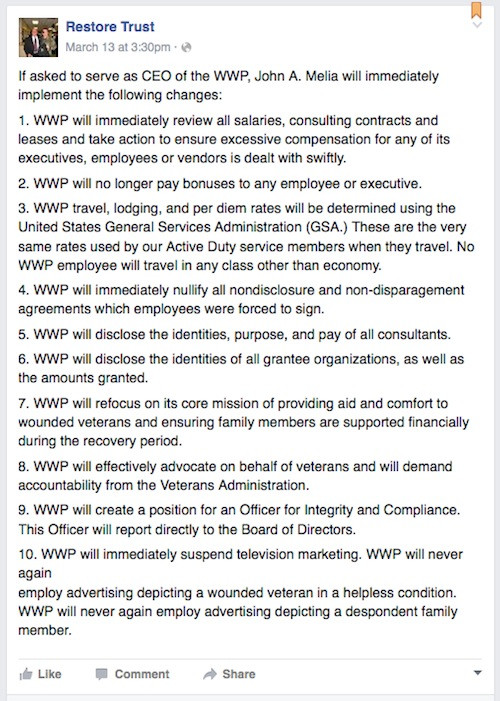 This seems like a reasonable plan of action, aimed mostly at promoting greater transparency. But there are a few items of particular interest here.

Wounded Warrior Project's astronomical growth over the last half-decade or so was in large part due to Nardizzi, who ran the organization more like a business than a charity. Part of that organizational philosophy was a competitive compensation structure designed to attract and retain top talent. Melia's plan to address "excessive compensation" and eliminate bonuses would change that, at least in part, and hints at a move away from the corporate business model.

Then there is item No. 10. Wounded Warrior Project has invested heavily in television marketing efforts, which have gone a long way toward establishing the organization as the nation's (perhaps formerly) preeminent veterans charity. Its most recent available tax records show that Wounded Warrior Project spent $2.195 million on "public awareness"—a 12-part documentary series filmed by creative agency Flow Nonfiction—and $2.15 million on DRTV fundraising efforts with another agency, Eaglecom. These expenses aren't out of line for an organization of Wounded Warrior Project's size, but they are the kind of dollar amounts that raise red flags with donors who might not be fully aware of how, exactly, the charity is using donation money. Melia's plan would suspend these television efforts, which could dramatically impact Wounded Warrior Project's already damaged fundraising capabilities.

Melia's plan stands in stark contrast to the "plan" Wounded Warrior Project's board set forth in its policy review findings. The board admitted that there were several areas “in need of strengthening,” including the organization's travel, employee compensation and employee training policies, but stopped short of offering any definitive steps it would take to address those issues. On Monday, Odierno told "CBS This Morning" that Wounded Warrior Project would "strengthen some policies and strengthen some controls around expenses," but didn't say how.

It's easy for Melia, on the outside looking in, to come up with a neat, tidy plan to fix the organization; it's much harder for the board, which must consider the long-term repercussions of every change and how each policy revision will impact stakeholders. Restoring public trust in Wounded Warrior Project is a complex task that will likely require an equally complex plan. But Melia has put something on paper. Wounded Warrior Project's board has not. It's no wonder Melia has already gained so much public support.

The board has not yet commented on Melia's bid for reinstatement.