Report: Giving Trends Vary Depending on US Region 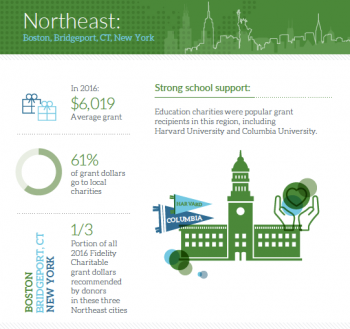 Here’s a question for you: Does location determine the level of donor generosity? When we think about our economy, we know that there are people who make a higher income in certain parts of the country and those who make a lower income on other parts of the country—so those factors can impact how much a donor gives to charity. It’s an interesting thought, and one that requires further analysis. This infographic dove a little further into this with its “Fidelity Charitable Giving by Geography 2017 Report,” which looked at activity in three representative cities for four areas of the country—Northeast, South, Midwest and West—to highlight the regional differences.

The study found that not only did grant sizes differ, so did the popular category of nonprofit. Let’s take a closer look at the report.

The three representative cities that the study looked at in the Northeast were Boston, Bridgeport, CT, and New York.

In the South, the study looked at Atlanta, Dallas and Washington, D.C.

Chicago, Cincinnati and Minneapolis were the three representative cities in this region.

In this region, the study looked at these following cities: Denver, Los Angeles and San Francisco.

Do these regional giving trends match up to your donors’ giving? To learn more, click here.

How Nonprofits can Protect Their Financial Health

Tax-exempt Organizations Filing Deadline is May 16