When Robert Morin, a University of New Hampshire alumnus who worked for nearly 50 years in the school's library, died in 2015, he left his entire $4 million estate to the university.

The story made national headlines. A quiet man, Morin reportedly saved his fortune largely unnoticed, eating Fritos and microwave lunches, and driving a 1992 Plymouth. The gift was a massive and welcome surprise for the university, which set aside $100,000 for the library—the only allocation Morin specified in his will—and said it'd spend $2.5 million on renovations to the student center and $1 million on a scoreboard for its new $25 million football stadium.

Let's first get something out of the way: Morin's gift, other than the $100,000 for the library, was unrestricted. The school is free to spend the funds however it likes. As Inside Higher Ed notes, the University of New Hampshire is historically not-so-great at fundraising. Its endowments stand at $345 million (for comparison, Harvard's are $36 billion), just 13 percent of which are unrestricted. Making Morin's gift public could attract more gifts.

“Fundraisers and universities like to be able to announce a gift so that others can follow in their footsteps,” Amir Pasic, dean of Lilly Family School of Philanthropy at Indiana University-Purdue University Indianapolis, told Inside Higher Ed. “It has kind of a demonstration effect.”

But it's still a bad look for the school. Morin was a film buff and a book lover. The Boston Globe reported that he watched more than 22,000 American movies between 1979 and 1997, and read in chronological order almost every U.S. book published in the 1930s. He lived alone. He smoked a pipe. He saved religiously. A $1 million scoreboard, critics say, is not what he would have wanted.

The backlash has been swift and brutal, especially on social media. Take, for example, these comments from the University of New Hampshire's Facebook page, posted today on an entirely unrelated article about seaweed beer: 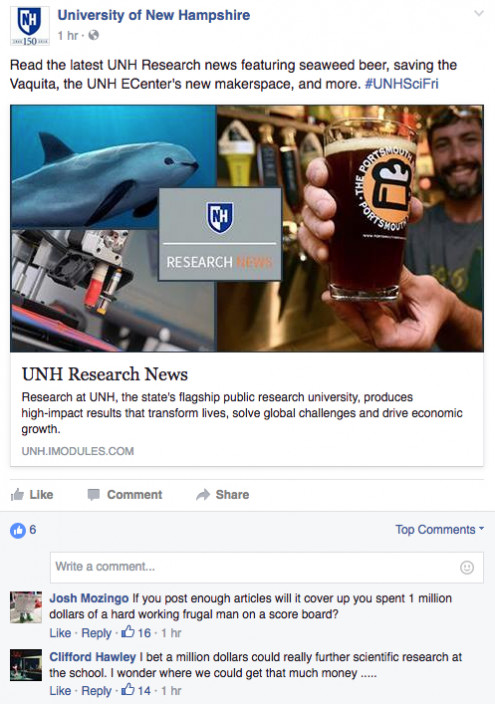 The school tried to justify the move by saying Morin became something of a football fan later in life. But that rang hollow for many critics, especially University of New Hampshire alumnus Claire Cortese, who wrote a blistering takedown of the school's administration on her blog:

For those of you who don’t know, the University of New Hampshire football stadium just received a $25 million renovation, and was reopened on Sept. 10, 2016. But apparently, $25 million just wasn’t enough. The university tried to justify the purchase of the new scoreboard by claiming that Morin became a football fanatic while he was in an assisted living home during the last year-and-a-half of his life.

So clearly, that’s much more important than his lifelong passion of reading and literature, right? The university clearly seems to think that it makes sense for the sports department to receive 10 times the amount that Morin’s own department is receiving, even after spending $25 million on a stadium renovation. The school also just recently spent almost $2 million on a new student athlete center, and $4.5 million to build a new outdoor pool.

Cortese didn't stop there. She blasted Deborah Dutton, vice president for advancement at University of New Hampshire and president of the UNH Foundation, for saying Morin's gift would give the school "the ability to use the funds for our highest priorities and emerging opportunities," then spending the money on a scoreboard. ("Oh really?" Cortese wrote. "A new football scoreboard is the 'highest priority?'") And she pointed out the university's ranking as the third most expensive public university in the country, compiling an itemized list of other things the school could buy with $1 million.

The original story of Morin's gift was big. This is bigger. NPR, The Washington Post, USA Today and a host of other major news outlets have reported on the scoreboard fiasco. The university is taking a massive public relations hit—one that could undermine its hopes that the gift would help generate future donations:

For now, the school is standing behind its decision.

“Any time you put anything out there with specificity, there is risk,” Dutton told Inside Higher Ed. “We anticipated that there would be people who might not agree with the choices we made, but we felt like it was important to be transparent and to celebrate what Bob has done and to celebrate his life.”