The Department of Labor in May announced new overtime rules, effective Dec. 1, that will make millions more Americans eligible for overtime. And, predictably, reaction has been mixed. Some nonprofits blasted the rules. Others praised them. But it wasn't clear exactly how the rules would affect the sector.

Now, we have a better understanding. National Council of Nonprofits last week released the results of a national survey polling nonprofits with government grants and contracts on changes to the overtime rules, and the results are ... well, kinda grim.

Check out this chart from the report: 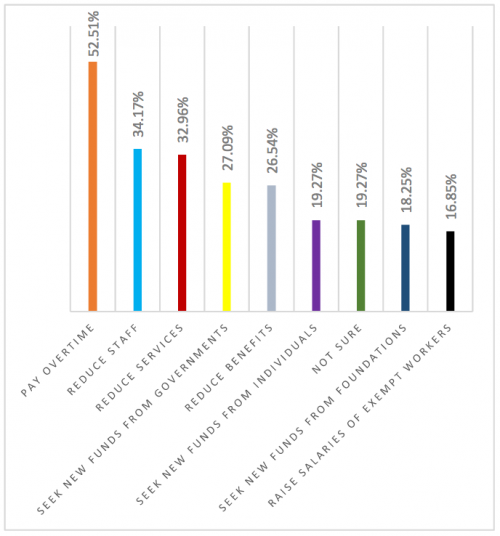 Chart via National Council of Nonprofits

The data shows that 52.51 percent of the 1,024 responding nonprofits plan to simply pay overtime in compliance with the new rules, while 16.85 percent will raise salaries to bring exempt workers up to the overtime cutoff threshold. Another 19.27 percent of nonprofits weren't sure what they would do. Nothing too shocking here.

But it's the second and third bars from the left that should set off some alarm bells. The report found that a third of nonprofits plan to reduce staff (34.17 percent) and another third plan to reduce services (32.96 percent) in order to stay compliant with the overtime rules.

According to National Center for Charitable Statistics, there are 1.41 million U.S. nonprofits. If you extrapolate the survey findings to the entire sector, that's 470,000 nonprofits forced to cut staff or reduce services. And while the extent of the damage would largely depend on the number of overtime-eligible employees each nonprofit has to pay, that still leaves in the aggregate a lot of potential for devastating reductions in impact and efficiency.

"All our government contracts have fixed budgets. We will have to cut services in order to keep staff below a 40-hour workweek," one survey respondent told National Council of Nonprofits. "Our staff is currently underpaid for the work they do. It would be great to be able to pay them more than $50,000 per year, but our funding will not cover this. I fear this will force us to discontinue services or even close the nonprofit organization."

Said another respondent: "Our only recourse is to reduce services provided by exempt employees and pay overtime in the very limited instances of extra hours. Any increased costs will have to be offset by reduced resources and services to our clients."

Among the biggest concerns for survey respondents was the inflexibility of government contracts. Many contracts already have failed to keep up with inflation and cost-of-living increases, and are set for a fixed period of time with no allowance for the sudden and unexpected increase in staffing costs. That's led to a potentially nasty catch-22—nonprofits with government grants are contractually bound to provide the agreed-to services, but the grants may no longer provide adequate funding for those services.

And while 27.09 percent of respondents said they'd seek new funds from governments and 18.25 percent said they'd turn to foundations for new funding, there's no guarantee those funds will be available. It's a messy situation, and nonprofits are understandably unnerved.

"We have not had an increase to our service rates for eight years and actually sustained an overall 2 percent decrease in that time," said one respondent. "With no potential for increasing revenue, we cannot afford to increase our expenses. Compliance with the proposed regulations will put our organization out of business in less than three years."

How Your Nonprofit Could Get Banned on Social Media